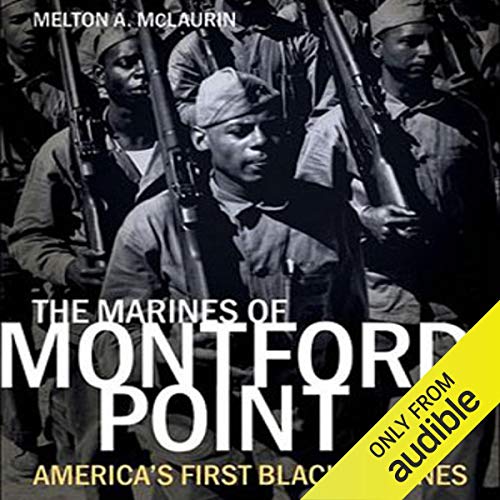 The Marines of Montford Point

With an executive order from President Franklin Roosevelt in 1941, the United States Marine Corps - the last all-white branch of the U.S. military - was forced to begin recruiting and enlisting African Americans. The first black recruits received basic training at the segregated Camp Montford Point, adjacent to Camp Lejeune, near Jacksonville, North Carolina. Between 1942 and 1949 (when the base was closed as a result of President Truman's 1948 order fully desegregating all military forces) more than 20,000 men trained at Montford Point, most of them going on to serve in the Pacific Theatre in World War II as members of support units. This book, in conjunction with the documentary film of the same name, tells the story of these Marines for the first time.

Drawing from interviews with 60 veterans, The Marines of Montford Point relates the experiences of these pioneers in their own words. From their stories, we learn about their reasons for enlisting; their arrival at Montford Point and the training they received there; their lives in a segregated military and in the Jim Crow South; their experiences of combat and service in World War II, Korea, and Vietnam; and their legacy. The Marines speak with flashes of anger and humor, sometimes with sorrow, sometimes with great wisdom, and always with a pride fostered by incredible accomplishment in the face of adversity. This book serves to recognize and to honor the men who desegregated the Marine Corps and loyally served their country in three major wars.

What listeners say about The Marines of Montford Point

I purchased this book at a busy time in my life, so I could not get to it immediately. When I was finally able to listen, I was filled with regret because it was great and difficult to put down. There were several poignant moments throughout which brought on much introspection.

What a testament to the values that the corps instills in it's recruits, draftees, and volunteers, where in the last chapters none of the gentlemen who endured so much hatred, and unfairness harbor any I'll will to the body they served.

A MUST Read For Every Marine!

This book is so unique the way it’s presented through the eyes of the Montford Point Marines. Almost every book I’ve read or listened to about war and/or history talks about it from the perspective of a historian while somewhat trying to tell a story. This book however, it gives firsthand accounts from Montford Point Marines, it can’t get any better or closer to the truth than hearing it straight from them. Absolutely grateful for what they went through and also saddened that they had to endure so much hate.

loved it
a great way to see the world from a marines point of view. the retelling of how each marine was affected by their experience.

An Excellent Oral description of what the Flag Barrrrs/Original Band of Brothers!!! They are the Giants for whom Shoulders we stand on today!!!! HOORAH

Great story that needs to be told, great performances and the Audible version is outstanding! Semper Fi

I am extremely grateful for the effort that was put into bringing this story to print. I had never heard of these first Black Marines and I feel enlightened to now know their stories.

A great book where I learned a lot of the history of the integration of the Marine Corp. But most importantly I had the opportunity to listen to many courageous brave men tell their stories of personal sacrifice and service to a nation that, for the most part, treated them horribly.

This book was very informative concerning the first black Marines. The various narrators representing various black Marines were very good.I would recommend this book for anyone interested in US military history.