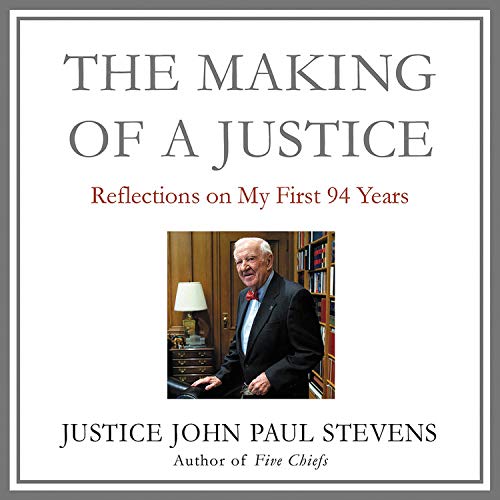 The Making of a Justice

When Justice John Paul Stevens retired from the Supreme Court of the United States in 2010, he left a legacy of service unequaled in the history of the Court. During his 34-year tenure, Justice Stevens was a prolific writer, authoring in total more than 1,000 opinions. In The Making of a Justice, John Paul Stevens recounts the first 94 years of his extraordinary life, offering an intimate and illuminating account of his service on the nation's highest court.

Appointed by President Gerald Ford and eventually retiring during President Obama's first term, Justice Stevens has been witness to, and an integral part of, landmark changes in American society.

With stories of growing up in Chicago, his work as a naval traffic analyst at Pearl Harbor during World War II, and his early days in private practice, as well as a behind-the-scenes look at some of the most important Supreme Court decisions over the last four decades, The Making of a Justice offers a warm and fascinating account of Justice Stevens' unique and transformative American life.

This comprehensive memoir is a must-listen for those trying to better understand our country and the Constitution.

"The retired Supreme Court justice chronicles his impressive life story, including his 34-year tenure with the court...The author's consistently absorbing commentary on a wide variety of legal cases will require close attention by readers, but the payoff is worth it." (Kirkus)

What listeners say about The Making of a Justice

John Paul Stevens (1920---) was appointed to the Supreme Court by Gerald R. Ford (1913-2006) in 1975. In his many years on the Court, Justice Stevens transcended the party ideology to work on issues with all the Justices. Justice Stevens tells of his early life, but the majority of the book is about key issues ruled on by the Court over the past thirty-five years. He includes legal cases he voted for or dissented on. The newest Justice on the Court in this book is Elena Kagan who replaced John Paul Stevens. Stevens spoke very highly of Kagan.

The book is well written and researched. I have been fascinated by the Supreme Court for a number of years. I found the personal information about the history and his views on various controversial decisions of the Count most interesting. I noted Justice Stevens did not pull his punches regarding Justices Scalia and Thomas regarding originalism and textualism. He also discussed his various friendships on the Court. Justice Stevens did not speak down to the layman. As Justice Stevens is ninety-nine years old, this most likely will be his last book.

The book is eighteen hours and thirty-one minutes. Robert Petkoff did a good job narrating the book. Petkoff is an actor/signer and a voice-over artist as well as an audiobook narrator. He was nominated for a Tony Award.

Way too much case summary

There were interesting parts of the book, when the Justice was talking about his private life and in the few instances about the relationships on the Court. But most of the book consisted of fairly quick case reviews, containing no more information than one could get by reading the cases. For example, the Justice would say, I wrote the majority opinion and I held "x." Then Justice X wrote the dissent and s/he said: "y." I can't thus really recommend the book. There are better books about the Supreme Court and about other justices.

excellent coverage of a great life

I really enjoyed this book. not knowing much about law or how the supreme Court functions it was educational, informative and entertaining.