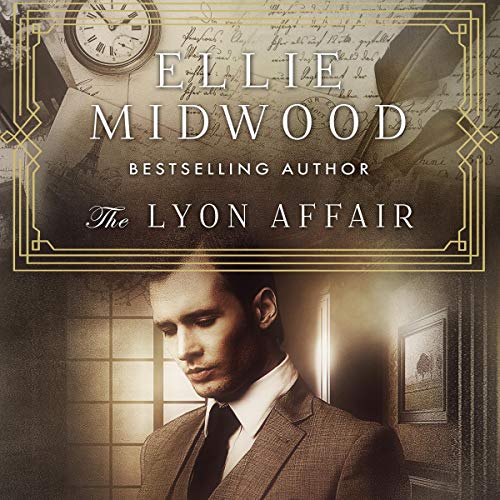 For fans of The Nightingale and All the Light We Cannot See, The Lyon Affair - audoibook two in the Indigo Rebels series.

A late diplomat's son with a brilliant mind; a Catholic priest with a dark past; a young woman scorned by her fellow countrymen for her German heritage; a young man who has just escaped the clutches of the ruthless Gestapo.

A tentative partnership created to fight against the common enemy, where the secrets of their pasts lead to disaster, and a betrayal of one may become a death sentence for all.

An unlikely hero...a cunning villain...one Resistance cell. One traitor in their midst.

When the Gestapo are closing in, and there’s nowhere else to run, one will make a decision that could change everything.

What listeners say about The Lyon Affair

In her stunning The Indigo Rebels, book 2, Ellie Midwood introduces the reader to the new engaging and multidimensional characters, at the same time, bringing us together with the ones we cared for in book 1. A master of intrigue, concealed, and mysterious, the author produced yet another book that you won’t put down till the last page is turned. Each phrase and nuance of the novel adds to the depth of the plot. The amazing writing craft of the writer gives a real feel for the ugly horrors of war and of the just cause of resistance, bringing the reader on a journey with the characters. I eagerly look forward to reading the third installment to this series. Highly recommended.

The Indigo Rebels series is a favorite of mine. It’s a great story, historically accurate, with fascinating characters. If you’re on the fence, don’t hesitate to buy this audible series. You won’t be disappointed. Can’t wait for the final book in the series comes to audible.

The second book in the series, but you could read it as a standalone. It features a new cast and setting, but a few characters from the previous book pop up again.

What I loved about this book is that we a great insight in the resistance and how they operated. So many things are happening,

Something i also loved was seeing how the characters develops and grow with each new experience. Marcel starts out as basically a still wet behind the ears student, but really grows in his role so does his confidence. And i have to say I did feel for Blanche. And i was saying please let her be okay for the last part of the book.

I look forward to reading the conclusion of this story

If you’re a fan of WWII thrillers and have an interest in the French Resistance and their actions, you’ll enjoy this audiobook. It’s obviously meticulously researched - I recognized a few familiar names including Jean Moulin and some of the events that took place in occupied France (the student march, for instance, was a real event, during which the fictional sub-prefect almost got arrested). I found the setting of war-torn France to be authentic and true to fact. My only criticism is that the narrator spoke a bit too fast at times, but it’s a minor thing that can easily be fixed in one’s settings. Apart from that, he did a wonderful job of bringing the characters to life. The final few scenes with the interrogation and the heroism of the main female character were particularly filled with tension.

Even though it's the second book in the series, you can easily listen to it as a stand-alone. I was happy to reconnect with the already familiar characters and thoroughly enjoyed the new ones, introduced by the author. The character development in book two was perhaps even better than in book one, especially when it comes to Giselle (my favorite character!). Sievers made a formidable antagonist and what I really loved was that he wasn't a typical, one-dimensional Nazi but more of an old police hound, who recognized and appreciated a courageous foe in the face of Giselle. I only wish there was more about Kamille and her husband, but I guess I'll have to wait for book 3 to find out how it all plays out.