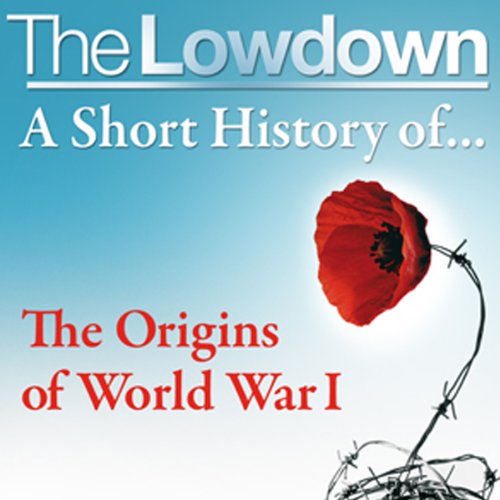 The Lowdown: A Short History of the Origins of World War I

By: John Lee
Narrated by: Steve Devereaux
Try for $0.00

A concise history of the origins of the “war to end all wars”.

Many of us know that the First World War began when Archduke Franz Ferdinand of Austria and his wife were assassinated in Sarajevo in June of 1914. But have you ever wondered exactly what chain of events led up to the incident that caused the whole world to erupt into one of the bloodiest conflicts in our history?

Why, amidst all the tensions in early 20th century Europe, did this particular incident in Sarajevo lead to Austria delivering an unacceptable ultimatum to Serbia, which would lead to Russia mobilising in support of Serbia, Germany in support of Austria, and then France and Britain in support of Russia?

Expert military historian and lecturer John Lee explains the causes behind the origins of the war and gives us a unique insight into the unfolding drama that defined and shaped a generation – and generations to come.

This book gives an insight into:

What listeners say about The Lowdown: A Short History of the Origins of World War I

It is a very clear and concise presentation of the political, military and social context that led to the start of WWI. Of course I studied all this in school, but that was about 15 years ago, so I felt the need to read this as an introduction to embarking on more extensive reading about WWI and WWII (just for personal interest). It was an excellent choice, exactly what I needed! The narration is very good. I'd say excellent but for the speed. It's a bit too fast if one wants to visualize the situation or remember dates and/or names.

Exactly what I needed for a brief but detailed summary of the causes of WW1! The narrator's voice is enthusiastic and bearable and it didn't take too long to get an in depth understanding of the consecutive events leading to the outbreak of war. Highly recommend