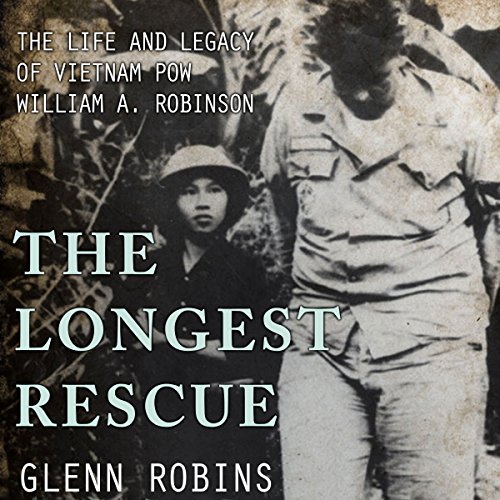 While serving as a crew chief aboard a US Air Force Rescue helicopter, Airman First Class William A. Robinson was shot down and captured in Ha Tinh Province, North Vietnam, on September 20, 1965. After a brief stint at the "Hanoi Hilton", Robinson endured 2,703 days in multiple North Vietnamese prison camps, including the notorious Briarpatch and various compounds at Cu Loc, known by the inmates as the Zoo. No enlisted man in American military history has been held as a prisoner of war longer than Robinson. For seven and a half years, he faced daily privations and endured the full range of North Vietnam's torture program.

In The Longest Rescue: The Life and Legacy of Vietnam POW William A. Robinson, Glenn Robins tells Robinson's story using an array of sources, including declassified US military documents, translated Vietnamese documents, and interviews from the National Prisoner of War Museum. Robins's powerful narrative not only demonstrates how Robinson and his fellow prisoners embodied the dedication and sacrifice of America's enlisted men but also explores their place in history and memory.

"An incredibly moving account of the brutal captivity and honorable return home of a big man with an even bigger spirit, William Andrew Robinson." (Lt. General Dave Fadok, USAF, Commander & President, Air University)
" The Longest Rescue is one of the most detailed and meaningful descriptions of what it means to be a prisoner of war." (Lewis H. Carlson, author of Remember Prisoners of a Forgotten War and We Were Each Other's Prisoners)
"This fine book tells the story of William Robinson's heroic life before, during, and after his captivity experience in North Vietnam... A very personal kind of story, one that touches the emotions deeply..." (Robert C. Doyle, author of The Enemy in Our Hands)

What listeners say about The Longest Rescue

Won't ever take for granted my freedom again. Great book narrated by a great voice I truly enjoyed reading it.

This is one of the best book that I have read. I would rate it with "Unbroken". Really liked the way that Capt. narrated, with his vivid word pictures, i really felt that I was there in the helicopter and prison camp with William, even though I was fortunate not have been shot down, I was also in the USAF, stationed in Thailand with a special helecopter squadron during 1968,69. This book and special care that Capt. Spalding used to tell William Robinson's story brought back many memories. I highly suggest this book to anyone.
Hugh Dan Stinson, MSgt, Retd, USAF

A Must Read Book about POW's

Have you listened to any of CAPT Kevin F. Spalding USNR-Ret’s other performances before? How does this one compare?

I did not know the background information even though I felt I knew quite a bit about Vietnam. This book is a must listen to if you are a historian or interested in the Vietnam War.

Great biography. It's full of amazing information not just about his experiences but also about the pow experience overall. It also provides a wonderful explanation of pow services provided throughout the years. Truly enjoyed it. I received this audiobook from the author narrator or publisher for free via audiobookblast in exchange for an unbiased review

What I really liked was the history lesson about Vietnam. They did not teach this to us in school as it was too new a war. Performance was okay

Makes you appreciate your freedom.

This book really makes you appreciate what others have done for your freedom. Thank you to all that have served.

Great insights into the experiences of a Vietnam PoW

Not having been alive during the Vietnam war, I felt that this book provided great insights into the life and experiences of a PoW as well as some of the history surrounding the war as a whole. After listening to it I felt I really knew the person of Bill Robinson and could empathize with him because I had learned his story. The author gives incredible detail about names, dates, and events which are very good indicators of accuracy and authenticity (I did not seek to confirm them myself). The performer reading this presents the book in a very matter-of-fact fashion and I very much appreciated knowing his background with the US military lends to a personal knowledge of the subjects of the book.

I would recommend it for anyone interested in the Vietnam war or PoW's in general.

Note: I received this book for free from the performer in exchange for this review.

The story was well written and gave great insight of what really happened to our POW's. The audio story was read and told very well. The only part that made me cringe was when he changed his voice to try to sound like a Vietnamese soldier.

The war ended only a few months after I was born, so this is all history for me. I don't know of any family members or friends who were there so much of this story was very new to me. I've seen the movies and heard stories but I don't have a real strong relationship to these events. Listening to Robinson's story gave me some new insight and caused me to think about, in a way I hadn't before, what these men went through.

You will never look at war the same!

The Longest Rescue is a must read! It tells a heart-wrenching story about the treatment of POWs in Vietnam. In the second half, it talks about the post-war challenges that the men faced coming back to a country where some people were grateful for their sacrifices but others hated them and weren't afraid to speak out about it.

An amazing perspective of history

very interesting with a unique view of a little known piece of history.
The book often highlights some of the cultural differences.
I received a free copy of this audio book at my own request and voluntarily left this honest review.