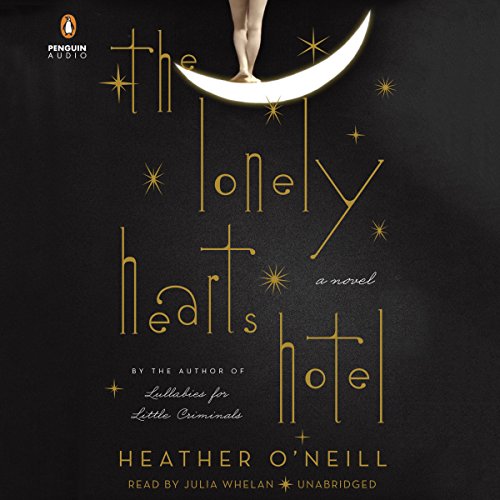 By: Heather O'Neill
Narrated by: Julia Whelan
Try for $0.00

With echoes of The Night Circus, a spellbinding story about two gifted orphans - in love with each other since they can remember - whose childhood talents allow them to rewrite their future.

The Lonely Hearts Hotel is a love story with the power of legend. An unparalleled tale of charismatic pianos, invisible dance partners, radicalized chorus girls, drug-addicted musicians, brooding clowns, and an underworld whose economy hinges on the price of a kiss. In a landscape like this, it takes great creative gifts to thwart one's origins. It might also take true love.

Two babies are abandoned in a Montreal orphanage in the winter of 1914. Before long, their talents emerge: Pierrot is a piano prodigy; Rose lights up even the dreariest room with her dancing and comedy. As they travel around the city performing clown routines, the children fall in love with each other and dream up a plan for the most extraordinary and seductive circus show the world has ever seen.

Separated as teenagers, sent off to work as servants during the Great Depression, both descend into the city's underworld, dabbling in sex, drugs, and theft in order to survive. But when Rose and Pierrot finally reunite beneath the snowflakes - after years of searching and desperate poverty - the possibilities of their childhood dreams are renewed, and they'll go to extreme lengths to make them come true. Soon, Rose, Pierrot and their troupe of clowns and chorus girls have hit New York, commanding the stage as well as the alleys, and neither the theater nor the underworld will ever look the same.

With her musical language and extravagantly realized world, Heather O'Neill enchants us with a novel so magical there is no escaping its spell.

What listeners say about The Lonely Hearts Hotel

The author truly has a gift crafting sentences that feel like poetry. If you like flowery, descriptive writing (as I do) you will find yourself pausing and replaying certain aspects of this book because they are so beautiful.

Would you recommend The Lonely Hearts Hotel to your friends? Why or why not?

I was really torn on this book. While I thought it was very well written and the story was interesting enough, I found so much unnecessary and somewhat disturbing sexual content. I am not a prude or afraid of graphic sexual content but much of it felt perverted without aiding the storyline. I would recommend this book to some but definitely not to young readers or to anyone who could not handle the pedophilic content.

Not "magical" and a bit disturbing

This book was not at all "magical" as one reviewer said and I found the sex and sex abuse disturbing. Overall not a fan.

WISH THEY LEFT OUT MOST OF THE SEX

I appreciated it being about Montreal Canada since I am Canadian. Lots of what was written no doubt happened unfortunately. I think the book failed having too much sexual content that is a bit too explicit. I did finish the book and overall liked the story. Narrator was a bit drab and maybe with a livelier narrator I would have got more out of it.

This story had so much potential but within 20 minutes of listening, the ugliness and downbeat aspects of the characters lives blotted out all the charm. The discription comparing this to "The Night Circus" ? Not even close. Julia Whelan is a good narrator. I felt sorry for her having to read this unpleasant story.

The beginning with the child abuse was hard to stomach, but that's what made it so good. It felt real. Great book. Highly recommend.

An exercise in similes

The story is so littered with similes that I eventually forgot about trying to follow the rambling plot line and instead started counting the similes. The time period between one "as if" or "like" and the next was usually a matter of mere seconds. Though the texture and depth of a story is generally enhanced by the skillful use of similes, in this book I found their shear frequency distracting.

Horrible, dark, entirely about sex, and not much else. I can't even finish it I'm so bored.

1t was a ltl disheartening at first and all the things tht happened to Rose ...but it really did turn into a very great book!

Torn between three and four stars

Well written, characters are deep, nuanced, fatally flawed and lovable, I know sex and power dynamics are an important part of their stories but wow, just too much sex.

Loved this novel! IMHO, If I were casting this to film the heroine Rose would be played by funnybone actress (Baroness Von Sketch) Meredith MacNeil. And Natasha Lyonne (Orange is the New Black) would own the role of Poppy.