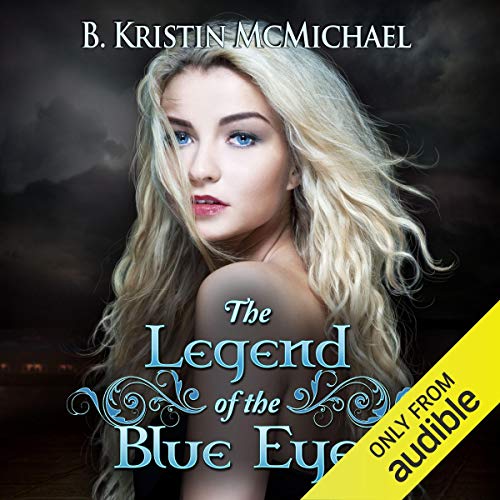 The Legend of the Blue Eyes

By: B. Kristin McMichael
Narrated by: Caprisha Page
Try for $0.00

Arianna Grace liked her boring, Midwestern, teenage life where she ignored the many unanswered questions of her childhood. Why were her parents dead? Why did she not have family? Where was she raised until she was five? When someone offers to explain it all, Arianna thinks she's just getting answers. Instead, she is thrown into a world of night humans who drink blood.

On Arianna's 16th birthday, her world is thrown upside down when she changes into a vampire. Night humans, or demons, as some call them, live in normal society. Learning all of the new rules of a world she didn't know existed might be hard enough, but it's further complicated by two former-friends that now want to help her take her role as the successor to her grandfather.

There is a war going on between the night humans. Sides have been taken and lines are not crossed. Four main clans of night humans are struggling for control of the night. Divided into two sides, clans Baku and Tengu have been at war for centuries with the clans Dearg-dul and Lycan. That is, until Arianna Grace finds out the truth; she's the bridge of peace between the two sides. But not everyone wants peace. With the night humans divided, Arianna is now a pawn in the war between them. She must choose a side--her mother's family or her father's--and for once in her life, decide her own fate.

What listeners say about The Legend of the Blue Eyes

B Khristin McMichael has a winner in her hands

As young adult stories go this is at the top of the pile. Ms McMichael's spends a yarn filled with young night creatures loving and fighting in well envisioned urban fantasy landscape. We hope her follow-up books are just as good.

I liked the narrator. The book put a whole different spin on vampires. I just couldn't get into the book. It seemed like it just dragged on. Thinking over the storyline it could have been a great book but I felt it was flat and lacked depth.

I really enjoyed this book. I can't wait to read book two and book three.

very interesting tale. i have already bought book 2 and 3. looking forward to getting started on book 2

The Legend of the Blue Eyes

The thing I kinda disliked about this book is that it didn't really make sense I found myself getting lost in all that was happening. I also didn't like how it would refer to Ariana in the third person. But I did like like the overall counsel of the story and the action, it was just a little confusing and hard to follow at times

Honestly I was hoping for some real fighting, this is a Swiss version of a violent book, (there is none) the discription of Andrews love got really annoying at times you should give us more credit we can figure things out on our own.. The ending.. was disappointing, if all you have to do is flex your power and all your foes leave then why is areona being protected all the time, I could have killed her cause she was such a wimp almost the whole series.

Loved the book, but not the narration

I LOVED this book and have already started the second in the series, but I wasn't a huge fan of the narration. Her cadence didn't always match how I would've read the scenes, so I feel like the impact of BKM's words was lost sometimes.

love how you write I feel like I am in the story. can't wait to start the next book.

This book is a casual easyread, neither horrible nor great. The good: it has an interesting concept, a shift from the traditional supernatural roles, it is not too blatantly sexual, and the audible narrator is reasonable good. The bad: the story is choppy, the heroine is very shallow, parts are repetitive. A reasonable early career effort. I hope the author continues to write and publish. To improve, I believe future books would benefit from a good editor to catch errors.

I really enjoyed this book and listening to the narrator read it, whether I was driving, house cleaning, or doing yard work. Definitely reading the next books in this series.

THis is both interesting and original. The story is well written and thought out. I look forward to reading the next.

I could not stop listening to this book. It was fantastic. I just fell in love with the characters and felt a real connection with the young orphan girl early on. It was full of emotion in the last chapter that was heart rendering and uplifting at the same time. If this is an example of what the rest of this authors book are like, then I am hooked.