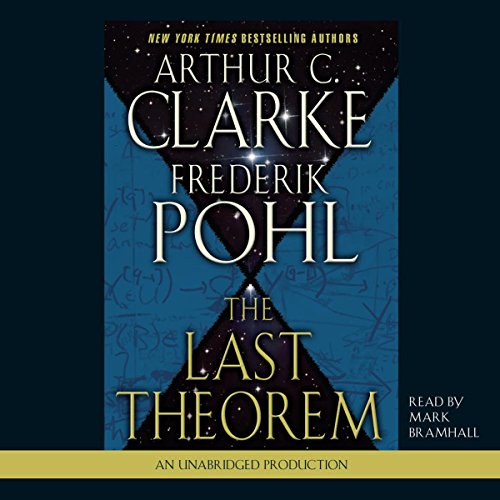 The Last Theorem is a story of one man's mathematical obsession, and a celebration of the human spirit and the scientific method. It is also a gripping intellectual thriller in which humanity, facing extermination from all-but-omnipotent aliens, the Grand Galactics, must overcome differences of politics and religion and come together or perish.

In 1637, the French mathematician Pierre de Fermat scrawled a note in the margin of a book about an enigmatic theorem. He also neglected to record his proof elsewhere. Thus began a search for the Holy Grail of mathematics, a search that didn't end until 1994, when Andrew Wiles published a 150-page proof. But the proof was burdensome, overlong, and utilized mathematical techniques undreamed of in Fermat's time, and so it left many critics unsatisfied, including young Ranjit Subramanian, a Sri Lankan with a special gift for mathematics and a passion for the famous "Last Theorem".

When Ranjit writes a three-page proof of the theorem that relies exclusively on knowledge available to Fermat, his achievement is hailed as a work of genius, bringing him fame and fortune. But it also brings him to the attention of the National Security Agency and a shadowy United Nations outfit called Pax per Fidem, or Peace Through Transparency, whose secretive workings belie its name. Suddenly Ranjit and his wife, Myra de Soyza, an expert in artificial intelligence, find themselves swept up in world-shaking events, his genius for abstract mathematical thought put to uses that are both concrete and potentially deadly.

Meanwhile, unbeknownst to anyone on Earth, an alien fleet is approaching the planet at a significant percentage of the speed of light. Their mission: to exterminate the dangerous species of primates known as homo sapiens.

What listeners say about The Last Theorem

The listener experiences the science of Clarke and the story telling of Pohl which makes for a delightful listen. Also, the listener gets to learn a little bit about number theory and what's all this talk been about Fermat's last equation and why people through out history have gotten hooked on it.

For me the funnest part of the book surrounds the Galactic Overlords and how they are everywhere but really nowhere and we should just call them "Bill" with quotation marks and should not directly confuse them with God.

It was fun to read about Sri Lanka and get a good discussion on what Immanuel Kant's categorical imperative really means and how it can lead to peace through out the known universe. (There is also a laugh out loud line in the book where the authors refer to the famous people who live in Sri Lanka and dance around the fact that it's one of the author's of the book, funny, funny stuff).

The story itself is a simple story but the presentation interspersed with the science and philosophy made for an engaging whole. The two writers each knew what there strengths were and contributed their strength to the story.

Love Clarke. Great read for super fans like me.

I wouldn't suggest this as an intro to the works of Arthur C. Clarke but it's a good one. Not the best of his works I've read and I am largely unfamiliar with Pol.

Major events in the narrative and arcs in the story seemed awkward and clunky when compared with other stories by Clarke that I consider favorites. They somehow pull off a great novel in spite of the "clunky" feeling of the of the narrative flow.

Other books of Clarke's seem to carry themselves a little more gracefully than this one did, but many of the same classic themes shine through and the spirit of the tale is fulfilling in the final execution.

They did a great job building an interesting story around a mathematical proof. That's a major achievement in and of itself. I hated math in school but loved the adventure of the main character trying to figure it out. The plot devices used to give Ranj the time to solve the math mystery was the first of various plot points to seem clunky, but I liked the character enough to let it slide and kept going.

Certain plot points seem too tidy but it's an interesting enough story to keep you wanting more and keep you along for the ride. Didn't unfold the way I expected (at ANY point throughout the novel) and I take that as an advantage in this case.

Didn't care for this one.

The story was not what I expected. Less scifi and more math. Title reflects the story, then there was some scifi thrown in as filler. Disappointed.

Good but not Clarke's Best

I think this story was more Pohl than it was Clarke. I kept reading Clarke's later work trying to find something to equal to what I consider his best work, Childhood's End, and I never found it. This was pretty good but you had to pay pretty close attention as the story got really involved. This isn't one of those you can listen to while you do your taxes and still keep track of the story. Worth a listen.

What disappointed you about The Last Theorem?

Old men telling a story about what they imagine to be how young people live, interspersed with their egomanical views on how to "save the world".

Has The Last Theorem turned you off from other books in this genre?

Who would you have cast as narrator instead of Mark Bramhall?

If you could play editor, what scene or scenes would you have cut from The Last Theorem?

Most everything. All the "happily living along in Sri Lanka" stuff.

The worst book by Clarke I know. By far. All of his old ideas mixed into one book, in a boring story with very little "science fiction".

I am a huge Clarke fan, but I was skeptical about a story that was built on mathematics, having struggled with the subject in school. I am so glad that I didn't pass on this book. Yes, there is a huge amount of high level math speak in this story, more than I could wrap my mind around, so I didn't even try. I just strapped myself in and enjoyed the ride. Didn't we all do that with "2001: A Space Odyssey"? I appreciated the character development with the exception of the military egomaniac who wasn't really necessary to the story. Clarke's "cameo" made me smile.

You must suffer through the long-winded story of a teenager's life in order to enjoy the sci-fi parts sprinkled sparingly here and there.

Recording is not in Sterio. It's Mono.

I listen on a device with headphones. When I started listing to title I was surprised to find the play back was only in mono. I though perhaps this was an old MP3 file so I deleted and re-downloaded. Same results. Repeated this a few times.
After some searching I noticed the file name itself was
The Last Theorem_ A _B002V1BGEK_LC_32_22050_Mono.aax
So *.aax is an enchanced audio file
Mono appears to mean file is mono, not sterio. Other files in my library have sterio in same spot in file name.
I see no options to change download type to get sterio.
An my playback device has no option to send mono to both earphones.
So I will not be listening to this title.

As such I give performance and story each a 3 as I cannot judge what I did not listen to.
Overall this product is useless to me due to the mono recording.