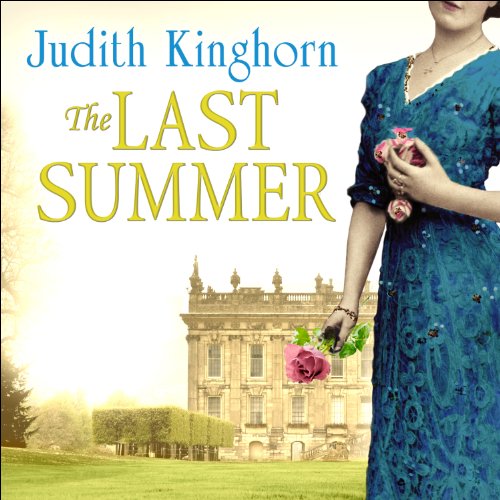 By: Judith Kinghorn
Narrated by: Jane Wymark
Try for $0.00

Clarissa is almost 17 when the spell of her childhood is broken. It is 1914, the beginning of a blissful, golden summer - and the end of an era. Deyning Park is in its heyday, the large country house filled with the laughter and excitement of privileged youth preparing for a weekend party. When Clarissa meets Tom Cuthbert, home from university and staying with his mother, the housekeeper, she is dazzled.

Tom is handsome and enigmatic; he is also an outsider. Ambitious, clever, his sights set on a career in law, Tom is an acute observer, and a man who knows what he wants. For now, that is Clarissa. As Tom and Clarissa's friendship deepens, the wider landscape of political life around them is changing, and another story unfolds: they are not the only people in love. Soon the world - and all that they know - is rocked by a war that changes their lives forever.

"A sumptuous, absorbing tale of love in time of war." (Rachel Hore, author of A Place of Secrets)

What listeners say about The Last Summer

I had to listen to this twice. I love Downtown Abbey, and this is in that vain. The writer's diction is carefully chosen. The characters are so vivid both through the beautiful narration and the writer's brush strokes. I found myself close to tears when Clarissa is close to tears. I was rooting for her to be happy. This novel is heartbreaking at times but brilliantly written.

I think the storyline was good and yes, it was well written. However the narrator's voice drew me in at once and made me care what happened to the characters.
I would love another of Judith Klinghorn's works to be recorded for Audible with the same narrator.
I love this period in British history as well and I would be sure to buy it

Obsessed with this story

This book is beautiful. The writing, the narration, and the story all beautiful. I lost sleep wanting to continue listening and became irritated when my family would interrupt me.

good story. I liked that everything wasn't perfect, the author did a good job keeping the reader engaged

I rarely leave a narrative review, but for this one, I had to. I was riveted throughout the entire novel. It was tragic. It was real. It paralleled my own life so closely that I couldn't stop listening, even though I very much wanted to at times. I cried more than I have cried in a very long time and it was purging. The story is about life, normal life, real life, and is so beautifully narrated that one is drawn into each character almost immediately. I feel spent now that I have finished the book. As an aside, I wonder if the author was in one of those proverbial valleys of life, that lead to writing such a story, but again...it is real life.

I found it hard to even begin another book after listening to The Last Summer because I just keep thinking about it. It's descriptive writing draws you into the story. It's heartbreaking and heartwarming at the same time. It's hard to stop listening. I recommend this book! FYI, the sex scenes are graphic but can be skimmed over.

A lovely, enchanting, tragic, romantic, and (at times) frustrating story that from the very beginning transports the reader to a bygone era at the start of the 20th century. Judith Kinghorn's knowledge of the cultural shift taking place, language and slang of the times, the crumbling of Britain's upper class society, and the devastating impact of WW I, elevates and authenticates this story, truly making it an experience to read/listen to. I could not put it down.

Not a quick, fluffy story. This is gritty, heavy with grief and loss, but also beautiful and enchanting. A telling which takes place over a 30 year period and has you digesting it for weeks afterwards.

Other reviewers have complained about Clarissa, the main character, being slow to act and speak up for herself - which she is - but for obvious reasons. Given the time period and the social class she was raised in, the author very accurately depicted how at 16 and 17 years old, a young girl, raised to be a lady, raised with the mantra that "education is wasted on young ladies", that a woman's most important role is to marry well and produce heirs to her husband, instructed and implored to never express strong emotions ("a lady who frowns, never wears the crown"), and to adhere to standards of propriety at all cost, could not possibly have the maturity and foresight to go against the very core of whom she was raised to be in order to attain her own happiness. Her mother, constantly preaches that life is sacrifice and compromise - "we all do what we must." It takes decades for her to realize that her mother does not know what is best for her. Honestly, I was struck by her strength and kindness in treating her family members with respect and love. Family members who contributed to her unhappiness and refused to see her own great sorrow. As in real life, it often takes people years or longer to know what they truly want in life. To overcome guilt - realizing they, themselves, are deserving of happiness, and that their happiness may come at an expense.

The much anticipated revelation of a particular heartbreaking ordeal Clarissa endured during the war does not come until the last few chapters. I found myself frustrated at her repeated almost confessions to Tom, her hero, and feared yet another 'missed opportunity' or worse, LOST opportunity. I was prepared to be outraged, but was in the end, very pleased.

I just loved this book! It was extremely well researched and written. I had some difficulty following the pre-chapter excerpts and took some time to discover the author of those letters.

Jane Wymark, as a narrator, does a great job! She perfectly narrates each character with their affectations. Well done!

Had me hook line and sinker....

In the end I could of shook her...but I got over it! The reading was wonderful!

I thought this was just a novel about WWI, but it was so much more than that. It was a beautiful, tragic, romantic story of love and loss. I felt the emotions down to my core., I knew the characters. I went through their lives, their story, with them. Excellent.

This book was both beautiful and realistic. I want to see this as a movie.