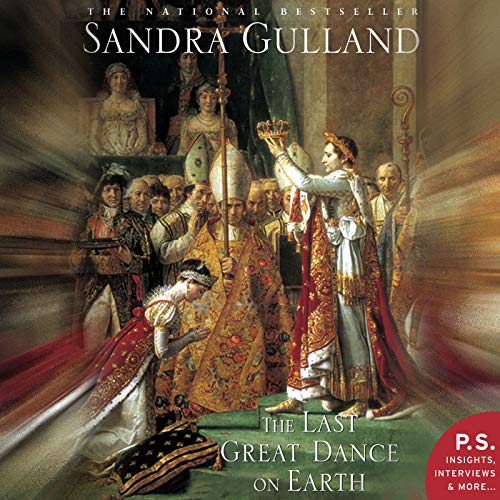 The Last Great Dance on Earth

By: Sandra Gulland
Narrated by: Kim Handysides
Try for $0.00

The Last Great Dance on Earth is the triumphant final volume of Sandra Gulland's beloved trilogy based on the life of Josephine Bonaparte. When the novel opens, Josephine and Napoleon have been married for four tumultuous years. Napoleon is Josephine's great love, and she his. But their passionate union is troubled from within, as Josephine is unable to produce an heir, and from without, as England makes war against France and Napoleon's Corsican clan makes war against his wife.

Through Josephine's heartfelt diary entries, we witness the personal betrayals and political intrigues that will finally drive them apart, culminating in Josephine's greatest tragedy: her divorce from Napoleon and his exile to Elba. The Last Great Dance on Earth is historical fiction on a grand scale and the stirring conclusion to an unforgettable love story.

What listeners say about The Last Great Dance on Earth

I’m so proud to say this trilogy was written by a Canadian author and promoted by our publicly sponsored radio station Cbc. When the first book was released the CBC had a once a week series where they would choose a new release and have it read long before audible came along. Sorry!! This
trilogy about Josephine Bonaparte is beautifully written as her diary. Most books I’ve read about France during the terrors and the revolutions gave me facts. This trilogy made me feel like I was actually living through all the promise, beauty and poverty, aristocrat and serf. You could smell the smells of the times and feel what it was like for those that waited to have their heads chopped off but mainly the complications and strengths it took to love napoleon Bonaparte. All though this is a work of fiction every book took you through what was happening historically in France after the American revolution. Don’t let the time setting turn you away. There is nothing boring or dry about this story.
The narration is beautiful and I will look for more by Kim Handysides.
Let your imagination go and follow Josephine while she was Rose growing up on the island of Martinique, her voyage to France to marry and what happens to her as she grows and matures.
Beautifully written and I have often encountered books written in diary style that left me feeling like I was eavesdropping. This one invites you to join the journey.
Congrats Sandra Gulland. You brought Josephine back to life.