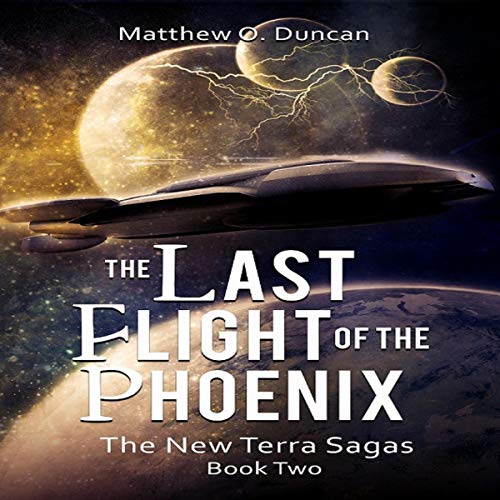 The Last Flight of the Phoenix

The war was over except for the crew of the TSS Phoenix. Lost deep in enemy space, crippled but not dead. The odds of survival were stacked against them, but they were still determined to fight their way back toward allied space.

On New Terra, Roy O’Hara had discovered peace for his spirit and joy in a simple life. Yet he had only fulfilled a portion of the Commander’s Prophecy. It told of a darkness that would fall on his new home from the stars, and he would be called upon once again to save them all.

The Alliance turned a blind eye to the sudden growth of the Sa’larie Empire just beyond their borders, but some in the intelligent community could see the clues of a new threat. A covert team is sent to discover the truth of the alien’s goals, and they discover much more than they could have ever imagined.

Different paths of unlikely allies and new foes will intersect in the skies and on the ground of New Terra once again, where everything will change and destinies will collide.

What listeners say about The Last Flight of the Phoenix

worth a serious listen. This author has great potential and I hope we here lots more from him and his narrator.