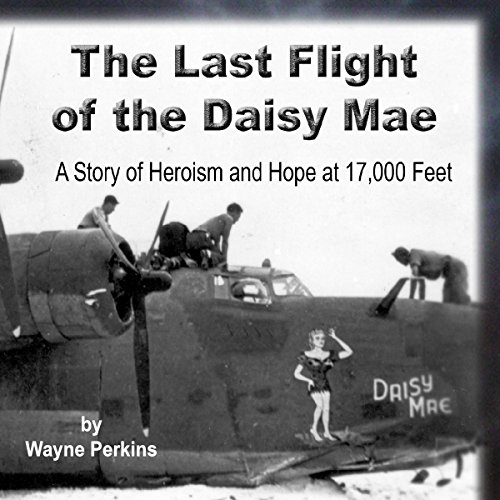 The Last Flight of the Daisy Mae

The Last Flight of the Daisy Mae

A young Army Air Force recruit, a farm boy, a postal worker a young mother, a nurse, and a goof off use their unique skills to fight and win World War II. The war is fought at home and in the stormy Pacific skies. On December 7, 1941, a high school senior, Fran Perkins, wakes up in his Chicago home to talk about Christmas shopping with older brothers Jim and Bob. As Fran's father, a combat veteran of World War I, turns on the large console radio to listen to music, there is an announcement the Japanese Armed Forces are bombing Pearl Harbor and World War II begins in the United States. Fran and his two brothers enlist the next day to fight the war so their younger brothers Edward and Raymond won't have to fight. This is the true story of Fran Perkins and the crew of the Daisy Mae, a B-24 Bomber flying and fighting in the skies over the Pacific Ocean. Nicknamed the Hawaiian Air Force, the 42nd Squadron, assigned with the 11th Bombardment Group (H) and other squadrons and groups of the 7th Army Air Corps, fly and fight together to win World War II. The 11th Bombardment Group, called the "Grey Geese", was almost completely wiped out during the attack on Hickam Air Field in Hawaii at the same time ships at Pearl Harbor were in flames. The group recovers, retools, and begins life again with B-24D Bombers that fly in small groups because of their limited numbers, and cover millions of miles of featureless ocean. Their mission is to protect the Hawaiian Islands from future attack, find downed aviators and crews, and lead the Bomber Line from Hawaii to Victory over Japan.

life in a B 24 in the Pacific World War II

Francis Joseph Perkins (1923-2012) and two of his brothers enlisted in the Army Air Corp days after Pearl Harbor. This is a non- fiction story about Perkins written by his son, Wayne F. Perkins. Fran ended up in the Pacific Theater flying in the 42nd Squadron, 11th Bombardment Group (H). Fran became a ball turret gunner in a B-24 Liberator, The Daisy Mae. The Daisy Mae fought over the Solomon Islands, Marshall Islands, Guadalcanal and Wake Island. For those who have read “Unbroken” by Hillenbrand, the Daisy Mae was the other plane in the search Y when the B-24 called The Green Hornet with Louis Zamperini as it’s bombardier went into the ocean.

The book is well researched and stays focused on the Perkins. The information about the women who installed the ball turret and guns was interesting. The note the lead installer put into each manual for the gunner can be classified as one of those little-known facts. Over all, the book was an interesting read and helps provide more information into the daily life of an airman in the pacific during World War II.

The book is just over nine hours long. The author was the narrator of his own book. This is an example of when a professional audiobook narrator should have been hired.