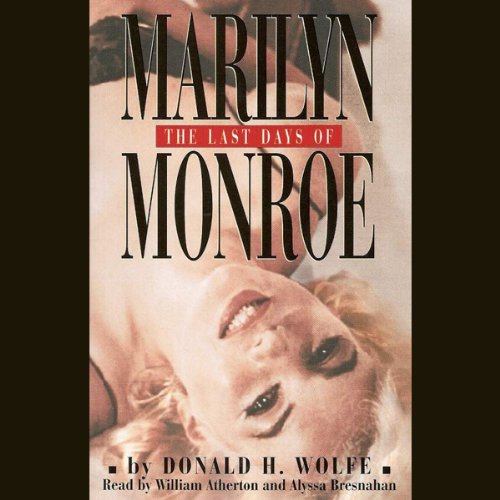 The Last Days of Marilyn Monroe

With explosive new revelations concerning the "National Security Matter" that led to the cover-up of her murder, The Last Days of Marilyn Monroe is a fascinating and riveting account of one of the most shocking crimes of the century. Donald H. Wolfe meticulously chronicles her final days, names the killer, documents the mode of death, and identifies those who orchestrated the cover-up.

The pieces of the puzzle finally lock into place with the testimony of the remaining two key witnesses who have come forward for the first time. Assistant District Attorney John Miner, present at the autopsy, reveals his secret interview with Dr. Ralph Greenson, Monroe's psychiatrist. He also explains why Marilyn Monroe was a homicide victim, and why he is calling for a new investigation and the exhumation of her body.

Newly discovered CIA and FBI files document the dark secret in Marilyn's relationship with the Kennedys, the truth behind her break-up with the president, the shocking facts about the star's last weekend at Cal-Neva, and the many bizarre events that took place at Marilyn's home the day she died.

What listeners say about The Last Days of Marilyn Monroe

PLEASE PUT UP THE NON-ABRIDGED

Great...If after listening to this book you still believe the Marilyn Monroe died at her own hand DON'T!!! If what Donald H. Wolfe said is correct, Ms. Monroe was MURDERED!!! We will never know for sure because of all the cover-ups during the period of my growing up. I love this short but informative book on Marilyn Monroe. I never have been a big fan of hers; however, it did not matter to me. WHAT A WONDERFUL LISTEN...INTRIGUE...MURDER...AND CAPTIVATING. The price is right as well. Give THE LAST DAYS OF MARILYN MONROE a listen...You won't be sorry.

...but where is the unabridged version? If this book was only allotted 3 hours, the almost one-third of the book spent on basic biographic information should have been eliminated in place of greater detail in the 'last days' of Marilyn. Still, this is a truly fascinating read.

What we don't know is the question

If you could sum up The Last Days of Marilyn Monroe in three words, what would they be?

Ms. Monroe's death. was it murder or suicide?

Which character – as performed by William Atherton and Alyssa Bresnahan – was your favorite?

not really sure if there was a favorite but Ms Monroe has always been one of my favorites.

I have never had much of interest in Marilyn Monroe but that was because I didn't know much about her. She is such a fascinating person and this book about her life is enthralling. I love hearing everything about her life. Great book!

"I thought it quite good"

I liked that the author was not forming a bias view and did not push personal beliefs on the reader. Rather, I found it to be quite factual and relying on the record statements and accounts known to be true and not speculated.

I knew very little about the life of Marilyn Monroe, only the basics, I was pleasantly surprised to learn not just about her final days but also her early life as well. The writer makes a compelling case that she was in fact murdered and undeniable there was a coverup of the truth. Turns out she was too big of threat to men like JFK, Bobby Kennedy and J Edgar Hoover....

Loved this book! Marilyn Monroe will continue to be the icon no matter who tells the story!

I enjoyed learning about Monroe's upbringing. It is a quick listen and easy to stay focused.

This book is well-written and very informative

The endings of the writer are always the same.... I already read 3 books and the endings are sooo similar.... nevertheless good story from the beginning.

Very interesting but far too short. Shame it does not include the detail of his earlier book.