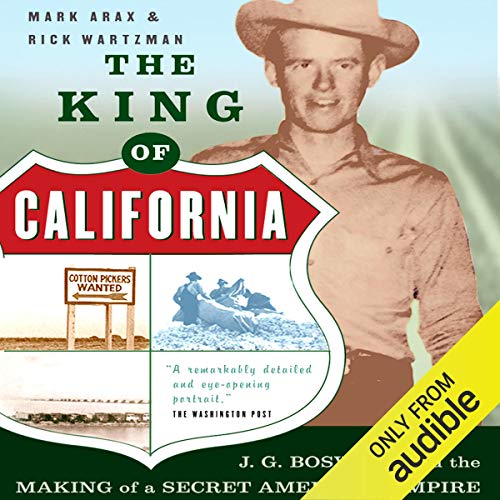 The King of California

J. G. Boswell was the biggest farmer in America. He built a secret empire while thumbing his nose at nature, politicians, labor unions, and every journalist who ever tried to lift the veil on the ultimate "factory in the fields". The King of California is the previously untold account of how a Georgia slave-owning family migrated to California in the early 1920s, drained one of America 's biggest lakes in an act of incredible hubris and carved out the richest cotton empire in the world. Indeed, the sophistication of Boswell 's agricultural operation - from lab to field to gin - is unrivaled anywhere.

Much more than a business story, this is a sweeping social history that details the saga of cotton growers who were chased from the South by the boll weevil and brought their Black farmhands to California. It is a gripping read with cameos by a cast of famous characters, from Cecil B. DeMille to Cesar Chavez.

What listeners say about The King of California

This book is a must for residents of the southern San Joaquin Valley. It delves into the history of the Valley for the past 150 or so years, and covers the amazing transformation the Valley has seen, not always for the best.

Would you listen to another book narrated by James Patrick Cronin?

The narrator was very inconsistent with the pronunciations of last names and towns. He flips between the correct and incorrect pronunciation of several towns. For example "Delano" is correctly pronounced "De lane oh" but half the time he says "De lahn oh". Why it was not edited to have correct pronunciation all the way through is a mystery to me. His inflection was not always on the correct word in the sentence The narration was adequate but annoying.

I think the authors portrayed the big farmers fairly and accurately.

The Boswell story is interesting but this book tries to be everything but a conventional biography. It's about JG Boswell but also his uncle and the whole family. That's fine but it also tries to illuminate the migratory worker struggle and technical aspects of agriculture. It's all over the place and is not bound at all by chronology. It was tough to finish!

Really enjoyed reading this book! What a story of the biggest farming operation in the Country.

beginning was amazing. then got super boring. would not recommend. could have been written at 1/5th the length.

Story is incredibly well researched, narration is very well done. take the time to have a listen.

I had some challenges with this book though I really tried to enjoy it from cover to cover. Unfortunately, I found that the book could only keep my interest for every-other chapter. The content had my ear for the most part, especially since it was discussing (central) California. The down-side was the fact that the details seemed to bog down the story.

The first chapter or two did an excellent job of setting a preface, but then the book morphed into a deep recount of the Boswell legacy in the mid-1800's. It sort of lost me. And it seemed like the book followed that trend until the last few chapters where the (current) legacy picked back up.

The book is worth the read, even with my average rating. You'll get immersed in the States history, and how Agriculture plays such a huge roll in our economy, whether you reside in California or not. Interesting to say the least...Though you may also get bored with the details.

Max Arax and Rick Wartzman tell the story of a family that combined hard work, farming wisdom and political maneuvering to build a farming empire in the San Joaquin Valley of California. This is a well-written and well researched story of the largest privately owned farming operation in the United States. In my opinion the authors appear to have a negative opinion regarding large industrial style of farming.

Jim Boswell moved to California from Georgia where the family had long been cotton growers. The boll weevil drove him out of Georgia to find land where cotton could grow. He worked as a cotton broker, until he saw the land of the southern San Joaquin Valley in California. He started buying land to farm, and then built Gin’s to process the cotton. He ruthlessly went after all the water rights he could obtain. As he grew into one of the largest farms his wife died. About 11 years after the death of his first wife Boswell married Ruth Chandler, Harry Chandler’s daughter. The Chandler owned the Los Angeles times, large tracks of land in the San Fernando Valley, Tejon Ranch and other properties.

The authors tell how Boswell bought land and drained Tulare Lake and started growing crops and buying more land. The Primary crops included Pima Cotton ( used by LL Bean, Hanes Co. Etc.) alfalfa hay, tomatoes, onions, wheat, safflower, then later almonds, and other varieties of nuts. The Boswells specialized in the long thread Pima cotton that is highly sought after. The company was established in Corcoran California in 1921. They ginned their own cotton and built processing plants to extract cotton oil and for all their crops. The book discusses the problems of the various varieties of migrant farm workers over the years. The migrant workers ranged from the dust bowl refugees, to German POW during the war, Chinese, Filipinos, to the Mexican. Arax and Wartzman go into depth about the movement of black cotton pickers and the treatment of these workers. The book goes into the various attempts to unionize the workers over the years and the various labor strikes.

In 80 years the family gained control of acres of farmland ranging from the San Diego area to San Joaquin Valley to Arizona and Colorado. The company now is also in Australia. Jim G. Boswell II took over at the death of J.G. Boswell and James W. Boswell is now the current CEO. Each one has increased the value and lands of the company. The book also goes into the inner family dynamics. The family is famous for their philanthropy and is a major supporter of the California Institute of Technology and the Claremont McKenna College. Anyone interested in California history, California agriculture history would enjoy this book. I found the book interesting as I know many of the people and issues the book covers. Sort of a trip down memory lane. James Patrick Cronin did a good job narrating the book.

Really good information, thoroughly researched. A very important story told without sympathy or judgment. Times were different then. I feel admiration and dismay in equal parts
for all that the Boswells achieved. Just a tiny quibble about the narration - mispronounciations of words like skied. And one of the authors is named Mark Arax and narrator called him Max.

I enjoyed the other book this author wrote much better than this one. This book is all over the place and difficult to follow. The timeline is not linear and he introduced so many people, all connected in a very confusing way, that I could not keep all the people straight. One would need a visual diagram to understand how everyone was related to each other by blood and by business. Here are my cliff's notes on this story, so you can save your audible credit:

The Boswell clan came from Georgia because of a boll weevil that decimated their cotton fields back east. They were descended from plantation owners, so they were not the most tolerant of blacks, and over time they have had their share of troubles with unhappy workers of all ethnicities. Because of unenforced land laws and shrewd political connections, they, along with a few other big farmers, ended up acquiring way too much land and thus controlling a huge amount of water in central California, which has made them all very wealthy. Their factory like efficiency has had a deleterious effect on the environment-lots of poisoned water, depleted wells, tainted soils, and if you google the Boswell corporation, it is still one of the largest cotton growers in the world.

After reading two of this author's books it is easy to get depressed about the California big AG business scene and the state of the California environment. It appears that the state is controlled by a bunch of rich white men-very much a case of 1%ers controlling government and the laws.

Obviously he author wanted to bring attention to a really broken system, but I feel this book could have been condensed to a much smaller number of pages, and the overall message would have been clearer and easier to follow.

My advice: Find an app or online article that summarizes the story of this man and his company and save your money.

Pretty bad, but if you think that corporations are the cause of man's miseries, this book is for you.

They lament and bemoan the native americans, then the birds and fish of the lake (swamp), then african americans, then the migrant workers, then the environment, politics, lobbyists, farmer subsidies, water rights, some beetle that likes elderberry bushes, etc. It goes on and on like this and pretty much focuses on anything remotely controversial about the Boswell company.

Very one-sided on the issues. They sometimes make an attempt to try to get both sides of the story, but it's clearly obvious they're pulling for the other side and not the Boswell company.

I'm 16-1/2 hours through this book, so I might as well finish it. I didn't learn anything except there's a really big family owned farm in California that must be pretty good at growing cotton.

Although, it's narrated really well...

Beautifully read and one of the best family stories I've ever read. Detailed information of every aspect of the personality and strengths and weaknesses of every one of the main players in this greatt historical tale . I throughly enjoyed every chapter .