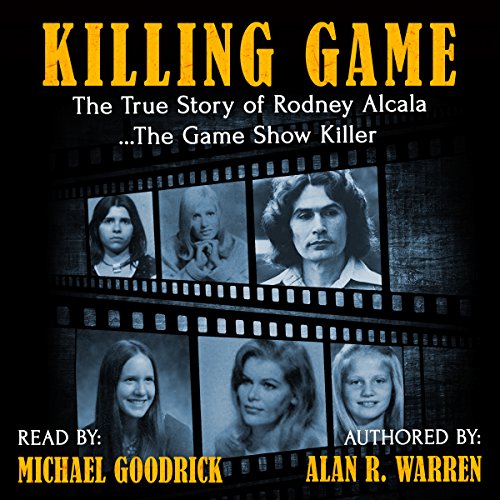 By: Alan R. Warren
Narrated by: Michael Goodrick
Try for $0.00

In 1968 young girls went missing in California and New York, massive searches started and soon bodies became to turn up! This is the story of Rodney Alcala, the charming, good looking photographer that was in NYU studying under Roman Polanski, and even once had won on the popular TV game show Dating Game, but now he is wanted for rape, torture, and murder of several young girls!

He would make the girls suffer until they passed out, rape them, and when they came to, he would beat them again before killing them! Alan R. Warren, best-selling True Crime Author and Radio Show host, takes you through each step of the story in shocking details including lots of details from the trials and the appeals that have been going on for over 20 years while Alcala is on Death Row!

What listeners say about The Killing Game

Narrator was o.k. just simple words mispronounced were distracting at times. Othwersise. a well written and well organized story of a truly viscious animal and the young women he tortured and killed. Author did not bog you down with lots of scientific jargon but got to the facts quickly. He also honored victims throughout which was refreshing in true crime arena.

it seems the author watched 48 hours and did a book report on it. it had exactly same information in it. Several pages were actually just definition of mental illness and medicines prescribed read straight from a medical book. The definition of intermittent sentences was also just read from statutes word for word.

The narrator had problems with pronunciation, spoke in a staccato clip and sometimes affected manner that detracted from the overall seriousness of the subject matter.