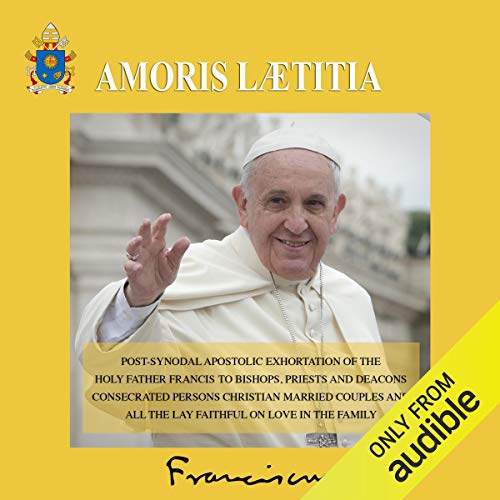 The Joy of Love (Amoris Laetitia)

Its introduction and nine chapters comprise 325 numbered paragraphs. Quotations are drawn from earlier popes, documents of the Second Vatican Council and regional bishops' conferences, St. Thomas Aquinas, and Rev. Martin Luther King, Jr. It includes what is thought to be the first reference to a film in a papal document, Babette's Feast (1987), along with references to works by Jorge Luis Borges, Octavio Paz, Antonin Sertillanges, Gabriel Marcel, and Mario Benedetti.

The Joy of Love has an introduction and nine chapters:

Francis begins by noting a division of opinion during the synods: "The debates carried on in the media, in certain publications and even among the Church's ministers, range from an immoderate desire for total change without sufficient reflection or grounding, to an attitude that would solve everything by applying general rules or deriving undue conclusions from particular theological considerations." He did not propose to resolve those differences by imposing unity: "Unity of teaching and practice is certainly necessary in the Church, but this does not preclude various ways of interpreting some aspects of that teaching or drawing certain consequences from it. This will always be the case as the Spirit guides us towards the entire truth" (paragraph three).

He warns the listener that the document addresses many issues in many different ways, and therefore, "I do not recommend a rushed reading of the text." He asks the listener to consider the text "patiently and carefully" (paragraph seven).

What listeners say about The Joy of Love (Amoris Laetitia)

No where else will you find the simplicity and joy that comes from loving your family so inspirational. Pope Francis is unique in that he able to intelligently articulate the faith in humble and earthy words, words that flame the fires of the heart to be more generous, more understanding, and more kind to the people sometimes most difficult to love - your family. In an age full of confusion about what to believe and who to follow, Pope Francis makes it easy by showing us that we are to follow the God of Mercy and the God of Compassion, an eternal God who will not fail to love all of humankind and creation. If there were one Catholic church document I would read in my lifetime, this would easily be the one. An absolute triumph in God's goodness!

When the Pope writes something, it is for us to read it (from my Church's pastor :)).
If you're looking for a reaffirmation of your personal perceptions of what a family is you won't find them here. Pope Francis is clear, yet caring and pious to explain what a family should be, what the fruits of real life love are, and as always what the path to enjoying Heaving beginning on Earth is.
Beautifully read.

What did you love best about The Joy of Love (Amoris Laetitia)?

So pastoral. Written in a way that I could understand and apply. As others have said elsewhere, it helps me frame up the myriad situations I might encounter, and how to share in that journey with others. There is a level of ambiguity as a collegiate colleague has voiced--something others have voiced as well--so this gives me a primer to engage in the discussion, and leads me toward what I hope is greater fluency in working with people.

Who would you have cast as narrator instead of Bill Fike?

I don't know that I would cast it differently. But I would most assuredly ask that whomever produces it, pay close attention to the narration. In two, brief sections (160 - 163), there were three occurrences of narrating the wrong word when compared to the text. I happened to be leaving my car and wanted to pick up on the written version before my class. In that short period of time, I picked up on the three errors. This does not bode well for accuracy in the document, for Audible, for the audiobook's producer, or for the Vatican office who might need to oversee or be aware of how the book is read and what content is changed due to error.

With the errors in two sections, I wonder how many errors there are throughout the narrated version. Would sure like to have an accurate copy.

wanted to read it, didn't have time

one of those things you mean to do, but somehow never get around to.. listening to this audio book checked many boxes. Voice of narrator brought warmth and joy to the words, as the holy father most likely intended

best to read along

Great writing from Pope Francis. Some of the words in the recording are incorrect or skipped which are written in the document from the vatican. Otherwise a great recording! Definitely made it easier to read.

Will keep on reading to the rest of my life. Useful for every person from any background or religion.