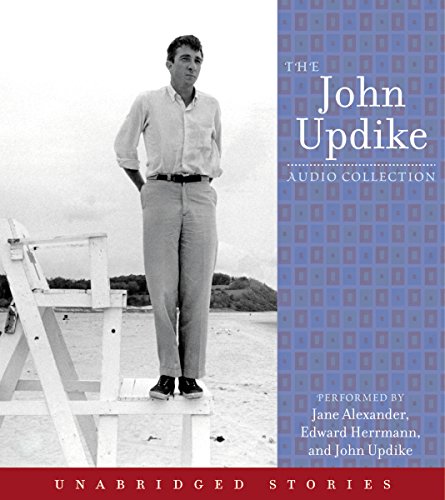 The extraordinarily evocative stories depict the generation born in a small-town America during the Depression and growing up in a world where the old sexual morality was turned around and material comforts were easily had. Yet, as these stories reflect so accurately, life was still unsettling, and Updike chronicles telling moments both joyful and painful. The texts are taken from his recent omnibus, The Early Stories, 1953-1975.

In describing how he wrote these stories in a small, rented, smoke-filled office in Ipswich, Massachusetts, he says, "I felt that I was packaging something as delicately pervasive as smoke, one box after another, in that room, where my only duty was to describe reality as it had come to me, to give the mundane its beautiful due."

"One expects the two distinguished actors narrating this collection, Edward Herrmann and Jane Alexander, to deliver sterling performances, and they do." (AudioFile)

What listeners say about The John Updike Audio Collection

This was a good read; I like short stories, and these were very evocative. I especially liked the connected short stories. The narrators all did an excellent job. The subject matter is intriguing; relationships mostly, and poignant and funny at the same time.

This was a good read; I like short stories, and these were very evocative. I especially liked the connected short stories. The narrators all did an excellent job. The subject matter is intriguing; relationships mostly, and poignant and funny at the same time.

This collection of short stories is by far the best and most worth while purchase from Audible. Updike is a master of prose and easily the best writer of our time. This is the only audio book of his that I have been able to locate. Updike himself reads a few of the selections in this audiobook, one of which is "Lifegaurd;" arguably his best and most profound short story. Edward Herman reads the nastalgic and comical "A&P" as well as some other selections. This product is a worthwhile purchase that is sure to please any lover of quality literature or masterful stories.

This is a nice introduction to Updike

If you haven't read Updike, this is a great introduction. It has excellent readers (including Updike himself on a couple of stories) & it typifies his close examination of the lives-&-loves of middle-class WASP life ... lives that have echoes in any ethnic group & really in any developed society or the middle-class of a developing one. The stories are written in such a way that you cannot fail to be drawn into the concerns of the characters, to feel sympathy/empathy for them, in accordance with your own experience. This is a "light" piece in the repertoire of Audible. Good to have it in between two heavy history works or other "challenging" books. A good respite, and very entertaining.

This was my first introduction to John Updike. Have a friend who warned me against the novels, but I attempted the short stories anyhow. The short stories in this collection are so well written, I am in awe of them. Narration, some of it by Updike himself, is also superb. Reminds me of Tobias Wolf in style, but most stories do not have a clear-cut theme. You have to do your own searching and deconstructing to find the hidden gems.

What else can I say other than " It's Updike".

Would you listen to The John Updike Audio Collection again? Why?

Yes. I have ready many of his works and will continue to.

If it were another narrator it probably wouldn't be the same.

From New England, so

I guess I am biased. His writing is always just so impressive. Consistent. A real American genius. I listened to the stories twice. However, my wife does not like him.

Serious literature. Insightful stories but must appreciate Updike as author.