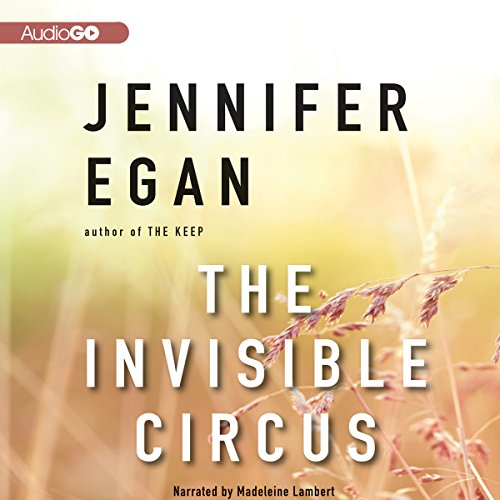 By: Jennifer Egan
Narrated by: Madeleine Lambert
Try for $0.00

In Pulitzer Prize-winner Jennifer Egan's highly acclaimed first novel, set in 1978, the political drama and familial tensions of the 1960s form a backdrop for the world of Phoebe O'Connor, age eighteen. Phoebe is obsessed with the memory and death of her sister Faith, a beautiful idealistic hippie who died in Italy in 1970. In order to find out the truth about Faith's life and death, Phoebe retraces her steps from San Francisco across Europe, a quest which yields both complex and disturbing revelations about family, love, and Faith's lost generation.

This spellbinding novel introduced Egan's remarkable ability to tie suspense with deeply insightful characters and the nuances of emotion.

What listeners say about The Invisible Circus

Made it 3 minutes into chapter 6

Sorry, but I have 2 pet peeves. 1) Narrators that mispronounce words and, 2) Stories that take FOREVER to get started.

I love metaphors, but his was too much. Every action and object seemed to require one. This style slows down the story and keeps the reader at a distance. From such a talented writer this was disappointing. I usually enjoy reading in print more than audio books but this one would have frustrated me had I read it as a paper book.
The story is...okay. The characters are not as well developed as in other work by this author. So, just pretty good but not really good work from one of my favorite writers.

I very much loved the story,, but the narrator was way too much for me. At times I felt like she was just screaming the whole storyline of the main character and I didn't knew if I was going to make it through the whole book.

Annoyingly dragged on 2/3s through

I really enjoyed this book until it became only about the sex the characters were having multiple times a day. It wasn’t exciting, it didn’t add to the story & there were eye-rolling corny quips about how they were ravenously hungry because they couldn’t tear themselves away from each other long enough to go eat. The sex became monotonous, though I’m sure that was not the author’s intent. I am highly annoyed that her editor didn’t cut 70% of this part of the book. Otherwise this would have been a 5 star story. I would not recommend it.

Too bad zero was not a choice...

I listened, or rather started to listen to this right after Nevil Shute's Trustee from the Toolroom. What a letdown. Eliptical gushing prose, frequent hyperbole concerning floating or despair, endless whining about real or imaginary childhood injustices, just hours of glop and never got better. i quit as our heroine had just figured out she had been lured, penniless and alone, into a heroin den. If you are a chickflick person you might like it. Even the mostly-half-in-tears narrator seemed bored with it. Buy Trustee from the Toolroom instead - you'll love it!!