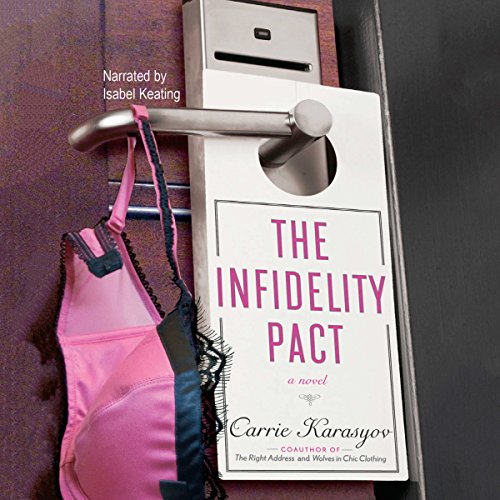 To address their general malaise, four privileged L.A. housewives each make a pact to have a year-long extramarital affair. Their husbands are declared off-limits, and the friends agree to confide only in each other (the theory being that dalliances cause trouble in large part because word gets out). And so the ladies embark - two eagerly, one cautiously, and one very reluctantly - on perilous romantic paths that lead to all manner of adventure and intrigue.

As the year progresses, secrets are revealed, betrayals pile up, desires are brought to light, lies are told, and each woman is forced to face up to the truth of who she is and the choices she has made.

When the women discover that a local gossip has been spying on their conversations and is threatening to reveal their secrets to the whole town, how far will they go to stop him? And how well do these friends really know each other anyway?

" The Infidelity Pact reads like Desperate Housewives on steroids and will keep you hooked until the end." (Bookreporter.com)

Like watching a train wreck in slow motion and no tragedy.

The book was an interesting listen

This was my first experiance with a book by Carrie Karasyov and it was just ok to me. The concept of the story was very interesting and parts of the story were really enjoyable especially during my long commute - but I sort of felt like the book just ended without real closure - I was left thinking I must have not downloaded the last chapter or something. Overall though it wasn't a bad listen and the narrator did a great job.