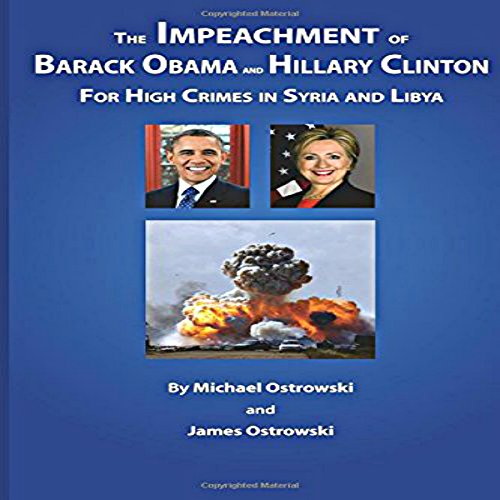 By: Michael Ostrowski,James Ostrowski
Narrated by: Joe Nagle
Free with a 30-day trial

This book proposes the impeachment of Barack Obama and Hillary Clinton for high crimes in Libya and Syria. Michael Ostrowski and James Ostrowski, who heard their father condemn the Vietnam War in a speech in 1970, have teamed up to write a profoundly antiwar book. When you hear the title, you may be tempted to think it's a partisan book. But it's not. It's mainly an antiwar and anti-state book that is really four books in one. First, the authors explain the colossal error that was American foreign policy in the Middle East for the last 100 years. Second, they expand the theory of progressivism (developed in James Ostrowski's 2014 book) and apply it to foreign policy. Hint: progressivism is even worse when applied to foreign affairs. Third, they introduce a new concept into political dialogue, archism, that helps clarify the source of so many seemingly intractable problems plaguing the modern world. Finally, they do deliver on the promise of the title. The book is a sustained argument for the impeachment of Obama and Hillary for starting or joining two illegal and extremely destructive wars that have the world on the edge of disaster.

It is good to hear that not everybody has been fooled by Obama and Clinton. Their legacy of endless war indeed needs to be taken serious

Please read this book then wonder what on earth is going on......Then just try and imagine how we can get from under the SHIT that governs us... A truly important read information that everybody should at least be aware of!!!!!!!