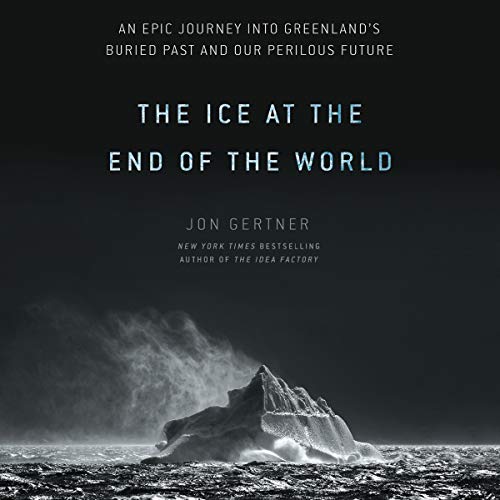 The Ice at the End of the World

A riveting, urgent account of the explorers and scientists racing to understand the rapidly melting ice sheet in Greenland, a dramatic harbinger of climate change.

“Jon Gertner takes readers to spots few journalists or even explorers have visited. The result is a gripping and important book.” (Elizabeth Kolbert, Pulitzer Prize-winning author of The Sixth Extinction)

Greenland: a remote, mysterious island five times the size of California but with a population of just 56,000. The ice sheet that covers it is 700 miles wide and 1,500 miles long, and is composed of nearly three quadrillion tons of ice. For the last 150 years, explorers and scientists have sought to understand Greenland - at first hoping that it would serve as a gateway to the North Pole, and later coming to realize that it contained essential information about our climate. Locked within this vast and frozen white desert are some of the most profound secrets about our planet and its future. Greenland’s ice doesn’t just tell us where we’ve been. More urgently, it tells us where we’re headed.

In The Ice at the End of the World, Jon Gertner explains how Greenland has evolved from one of earth’s last frontiers to its largest scientific laboratory. The history of Greenland’s ice begins with the explorers who arrived here at the turn of the 20th century - first on foot, then on skis, then on crude, motorized sleds - and embarked on grueling expeditions that took as long as a year and often ended in frostbitten tragedy. Their original goal was simple: to conquer Greenland’s seemingly infinite interior. Yet their efforts eventually gave way to scientists who built lonely encampments out on the ice and began drilling - one mile, two miles down. Their aim was to pull up ice cores that could reveal the deepest mysteries of earth’s past, going back hundreds of thousands of years.

Today, scientists from all over the world are deploying every technological tool available to uncover the secrets of this frozen island before it’s too late. As Greenland’s ice melts and runs off into the sea, it not only threatens to affect hundreds of millions of people who live in coastal areas. It will also have drastic effects on ocean currents, weather systems, economies, and migration patterns.

Gertner chronicles the unfathomable hardships, amazing discoveries, and scientific achievements of the Arctic’s explorers and researchers with a transporting, deeply intelligent style - and a keen sense of what this work means for the rest of us. The melting ice sheet in Greenland is, in a way, an analog for time. It contains the past. It reflects the present. It can also tell us how much time we might have left.

“The Ice at the End of the World is a masterpiece of reportage and storytelling. What Gertner has found on Greenland’s remote glaciers is a harrowing tale of extremity and survival, as well as a harbinger of our own precarious future here on earth. Equal parts science, adventure, and history, this important book is a revelation, one that lingered for me long after turning the last page.” (Michael Paterniti, author of The Telling Room)

“Jon Gertner guides us on a perilous and fascinating journey to the remote island that lies at the epicenter of our understanding of climate change. With compelling prose and lucid scientific explanation, he tracks the explorers and scientists who, over two centuries, have tried to fathom the immensity and mysteries of Greenland’s inland ice. Both enlightening and disturbing, The Ice at the End of the World takes us on a gripping adventure into the thawing heart of global warming.” (Peter Stark, author of Astoria)

There is a lot of excitement in the detail of early explorers who somehow transitioned over the past 125 years into meticulous scientists who for the most part retained a sense of adventure in a well drawn and exotic landscape that few people, certainly I, know little about. Weaved throughout is a portrait of climate change and how Greenland (and Antarctica) play a key role in our knowledge and potentially solutions. World forces, including the quest for minerals, game and nuclear safety, are shown as drivers of exploration. The first part of the book describing early exploration is the most adventurous, but by the second part we are ready to learn the rest of the story. This is a great book for people who live to learn adventure in a context that goes beyond the old saw, "we go because it's there." One quibble: as an audiobook, I would have really liked to have had a few PDFs showing the routes of explorers and the sites of settlements and stations.

Epic stories of the pioneers of ice adventuring

I was extremely pleased with the scope and depth of the stories built into this epic narrative of the rugged adventurers who mapped out the formidable Greenland ice sheet and how their early expeditions built up an understanding of the science of glaciers. That science has now become crucial in understanding the impacts of global warming, and those links and how they were discovered are explored thoroughly here. A masterful combination of science, history and epic biography.

Difficult to get through

It's worth reading if you're interested in climate change, but I had trouble finishing it.

very nice, only one probem

I think its a bit stupid to use the american measurement system (feet, miles, °F) it very excluding to the international community (scientists included). otherwise a fantastic chronicle of polar sciencs

This is a great history of arctic exploration - it grabs you in a similar way that the story of Shackleton´s Endurance holds you. That´s the first half or so. Then there are so many fascinating tidbits, like the story of a mini portable nuclear reactor that the US military sent to Greenland - and then abandoned it there. The transitions to modern science are really interesting, and the connections to the ice sheet´s early explorers and today´s meltdown are delicate and detailed.