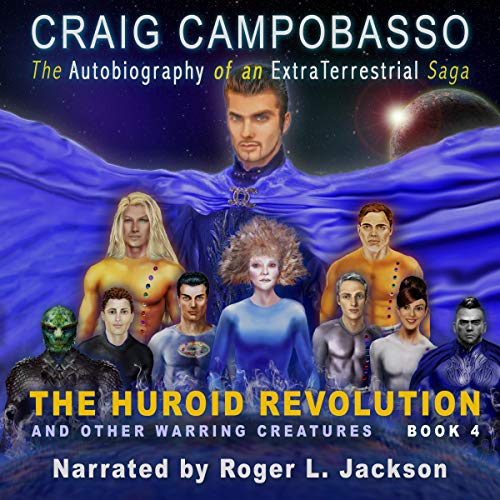 The Huroid Revolution and Other Warring Creatures

By: Craig Campobasso
Narrated by: Roger L. Jackson
Try for $0.00

In the Doorchusser Constellation, a rock planet hangs in a dark galaxy. Hidden on this world is the Miradoor, the only gateway into the evil realm of Agroanan Manbats, where Alignment commanders and another are held captive. In the midst of a Huroid revolution brewing, it is up to Solar Commander Thyron to find away through the Miradoor, protect his crew from Manbat Psymindtrics, rescue their brethren, return to their universe, and close the gate forever.

When the Miradoor is compromised, Thyron and the Galacterian Alignment are thrust into a land and star battle with several warring creatures all having ties to a mastermind behind the mayhem. Manbats, Warlocks, and mind-controlled-turned-evil Huroids all collide on the rock planet. Not to mention another war with reptoids and Crytonnians.

Outnumbered by the evil armies of land and air, Thyron is their only hope. In his possession he holds "The Light of Paradise; The Light of Grace." Knowing what he has to do with this "Light", he violates Alignment protocol, is vulnerable to attack, and faces his own death.

At battles end, the war is far from over; it's on reprieve. Lives are lost and the team grieves for the loss of a beloved commander. What is the final fate of the universe? Will Commander Thyron live to tell another tale? Find out this, and more, in this action-packed adventure.

What listeners say about The Huroid Revolution and Other Warring Creatures

I really enjoyed this series

Character insights into 5D consciousness? A viable format to introduce many higher vibrational concepts: unity vs duality consciousness. Ascension Chakras. New Technologies and much more wrapped into an extradimensional story/adventure.

Maybe my biggest critique was each book had a different narrator and personality traits in main characters were evident from one volume to the next.