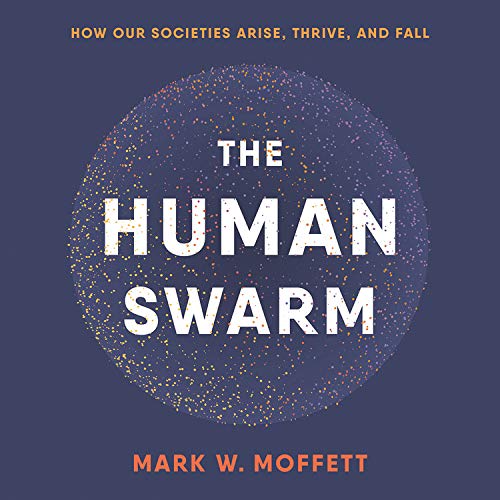 If a chimpanzee ventures into the territory of a different group, it will almost certainly be killed. But a New Yorker can fly to Los Angeles - or Borneo - with very little fear. Psychologists have done little to explain this: for years, they have held that our biology puts a hard upper limit - about 150 people - on the size of our social groups. But human societies are in fact vastly larger. How do we manage - by and large - to get along with each other?

In this paradigm-shattering book, biologist Mark W. Moffett draws on findings in psychology, sociology, and anthropology to explain the social adaptations that bind societies. He explores how the tension between identity and anonymity defines how societies develop, function, and fail. Surpassing Guns, Germs, and Steel and Sapiens, The Human Swarm reveals how mankind created sprawling civilizations of unrivaled complexity - and what it will take to sustain them.

"In the past quarter century, there has emerged a genre of Big History that includes such epic books as Jared Diamond's Guns, Germs, and Steel, Steven Pinker's The Better Angels of Our Nature, and Yuval Noah Harari's Sapiens. Mark Moffett's The Human Swarm is destined to be included in future lists of such books that not only add to our understanding of who we are, how we got here, and where we're going, but change our perspective of how we fit in the larger picture of life on Earth. A magisterial work of monumental importance." (Michael Shermer, publisher of Skeptic magazine and author of The Moral Arc)

"This is a book of amazing ideas, many of them counterintuitive. Mark Moffett's astounding stories of animal societies persuaded me that the future of human cities have been foretold by the ants. Read this manifesto if you like to have your mind changed." (Kevin Kelly, founder of Wired Magazine and author of The Inevitable)

"[Moffett] intrigues by setting human societies in the context of those of the animal kingdom. This fine work should have broad appeal to anyone curious about human societies, which is basically everyone." (Publishers Weekly)

What listeners say about The Human Swarm

I have learned that when an Audible book begins with orchestral music in the background, it's probably going to be a loser. That's just a correlation I've observed, particular to my tastes only. I'll take the cake, don't need the frosting. Having moved through this initial melodic distraction and listening to the narrator's nauseating chirpy tone, things only worsened as he warbled on and on about animal behaviors of which I was already aware. And man, can he warble! The narration alone made this a loser.

But I gave it a chance, at least two hours' worth, coming to the conclusion that this worn-out material has already been well-presented by Richard Dawkins, Bobbi S. Low, Jared Diamond, Matt Ridley, and a plethora of others.

It's probably an acceptable primer for those who want to take their first peek into the cauldron of Homo Sapien's socials structure relative to other species. For me, this was a disappointing piece of work.

I liked the facts, but repeating most of them 3-4 times, 1/2 length perhaps could do.
By the end it all built up to insightful conclusions about our nature and prospects of human societies - strained.
Highly recommend.

_The Human Swarm_ by Mark W Moffett is the book I didn’t know I needed. It covers a topic that’s been missing from the discussion of human society, and the perspective it offers fills gaps in what I’ve learned from other books. Moffett covers the topic of anonymous societies—animal groups in which other animals are identified as “members” even by individuals that don’t know them personally. An Argentine ant, for example, can be accepted by other Argentine ants of its super-colony even hundreds of miles away from its origin, using scent as a marker of belonging. Likewise, Mohawk Indians were able to identify and welcome each other even when they didn’t know each other, thanks to their distinctive hairstyles. Moffett identifies a sort of social organization that is unusual in the animal kingdom but not unique to humans. A more common arrangement is a flock, herd, or nesting colonies, where individuals that don’t know each other get along, but that’s because no individuals are excluded. In intimate bands or families, by contrast, only individuals who know each other are welcome. For a small number of animal species, however, a society consists of individuals that can identify each other as “insiders” without knowing each other personally. This social organization is found among Argentine ants, scrub jays, and humans.

Perhaps it’s no coincidence that Moffett’s mentor was E O Wilson, the ant expert who revolutionized our understanding of human nature with his book _Sociobiology_ (1975). It’s humbling and exhilarating how much we can learn about human society by comparing and contrasting ourselves to ants. For my purposes, Moffett’s description of Argentine ants was worth the price of the book. Unlike other ant species, Argentine ants form super-colonies with multiple queens. In Argentina, these ants super-colonies are kept in check by the one thing that can stop them: other super-colonies of Argentine ants. In California, where the Argentines are an invasive species, they spread almost without limit. Again, their only limit is another invasive super-colony. The comparison to humans is elementary.

One of the revolutionary findings of contemporary psychology is that humans are “groupish”, as Jonathan Haidt puts it in his seminal book _The Righteous Mind_ (2012). Freud taught that humans are inherently selfish, but intellectuals of his day had no clear understanding of human evolution or prehistory. Now we understand that humans are innately social, a trait that we can trace back tens of millions of years to our early simian ancestors. Morality, as modern researchers contend, is an adaptation that helps us get along in groups of our peers. Moffett’s insights help us see this “tribalism” on the scale of anonymous societies. Sure, it’s easy to understand why people prefer their friends and kin over strangers, but this book illuminates the human practice of preferring people we don’t know provided they have the right hair styles, modes of dress, manner of speech, or other societal markers. This book unifies Haidt’s modern-day insights, the globe-spanning analysis of Francis Fukuyama’s _The Origins of Political Order_ (2011), and other big-picture books about the nature of human society and the human animal.

_The Human Swarm_ does an admirable job of surveying the topic on all levels: ants that are more or less specialized, spiders that impersonate ants to predate them, chimpanzee bands with their distinctive pant-hoots, bands of humans who know each other as kin, groups of human bands that cooperate across societal boundaries, groups of human bands that split to create new boundaries, and today’s bewildering mix of human populations. Just the information about whales and scrub jays make this book worth your time. Moffett knows that he is filling in the blanks left by previous ethologists and anthropologists, and this book is a trove of both big ideas and delightful details. Perhaps the most important information for understanding human societies is the material on non-state societies and the bands that compose them. Here we see the many ways that humans have marked membership in their societies and the xenophobia toward outsiders that was the default perspective.

Disclosure: E O Wilson is a fan of my children’s book, Grandmother Fish, so any friend of his is a friend of mine.

An essential book on understanding the human animal, human nature, and the formation and future of our societies

The journey from chimp to human

This was one of those fascinating “guns germs and steel“ reads.

The author brings remarkable new information and his own compelling analysis to make a great book about our ever evolving human social structures.

very interesting concept on paper - thinking about human societies biologically.
in practice hard to follow especially because the books makes so many statements outside the realm of biological expertise (sociology, anthropology, psychology etc) - it feels like there are too many personal opinion tangents and they are not labeled as such.
the performance felt somewhat mechanical. the sound is very clear but there is a lack of emotional engagement from the reader that made it harder than other books in the space to listen through. sapiens is an easier listen, so is the weirdest people in the world, or the righteous mind.
still i am glad I did go through it there are many interesting perspectives.

This could be a rather dry college freshman textbook, I suppose.

Has a few good nuggets, but often seems to be droning on about humans as if they were rather one-dimensional, not the richly exasperating animals we know and love.

An important book in today’s world

Thoroughly researched. Makes a compelling case for an explanation for many of the nuances of us versus them thinking in the world today.