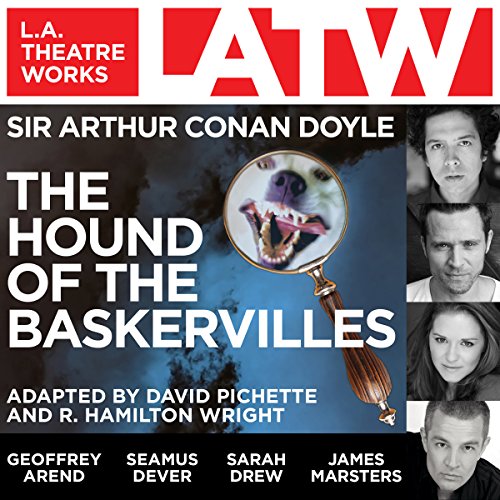 The Hound of the Baskervilles (Dramatized)

Did a supernatural hound cause the death of Sir Charles Baskerville? Or is the famous Baskerville curse simply a cover for more sinister goings on? The redoubtable Sherlock Holmes and his sidekick Dr. Watson face danger in an old mansion and on the moors in this rollicking stage adaptation of Doyle’s classic adventure.

What listeners say about The Hound of the Baskervilles (Dramatized)

A Fun Twist on the best Sherlock Holmes story

I have a particular love for the stories of Sherlock Holmes and tend to be wary of "new" Sherlock Holmes tales. Still, I'm glad I tried this one out. I have a weakness for James Marsters's work and this did not disappoint. The humor, though unfamiliar to the story did not detract from it and most of the tale stayed true to the original. All the actors did an excellent job and I have listened to this production a number of times and it doesn't lose its sense of mystery or of fun.

I saw that this had won an "Audie" category, and, given the price and my affection for Sherlock Holmes, it seemed a no-brainer to add it to my Audible library.

Right! This is a terrific production. It's respectful to the original yet updated in a lot of ways. The cast has great energy, and the writers have added a good deal of welcome humor to the Victorian classic. Not certain that Conan Doyle would fully approve all the changes, but I do!

Well worth the very cheap price. I've listed to several LATW full cast productions and have found them to be fine.

Also note that these two-hour-or-less listens are excellent for auto trips!

Sherlock Holmes with a fun twist!

STORY - I haven't heard the regular version of The Hound of the Baskervilles, so I'm unable to compare them in this review except to say I doubt the original version was this much fun. Bottom line, there is a dark family history of mysterious deaths. Holmes and Watson try to figure out if a huge supernatural dog is the cause of the deaths, as is rumored, or whether there is other evil at work. I would imagine the original book is eerie and suspenseful. This version draws you into the dark mystery of the murders but then makes you laugh at stuff that happens in between.

PERFORMANCE - This is performed by a professional theater group, so there is great music and sound effects. There are multiple actors, therefore you will hear different voices for each character. Since you aren't watching them perform on stage, you don't get the benefit of watching their antics or expressions, but it is still a great listening experience.

OVERALL - Since this is Sherlock Holmes, there is no cursing or sex, and the murder descriptions don't dwell on blood and gore. Highly recommended for all adult listeners, male or female.

Not Cumberpatch, but still Sherlock

Oh, the drama! I love listening to this and then watching the Sherlock adaptation in my memory palace, just to see our geniuses at work.

A comedic take on a classic.

The performances were wonderful. It had the feel of a true theater performance. They really played up the humor. Having said that, this is an edited version of the story. Characters and the story were both changed. If you are looking for the original book, look elsewhere.

Brings a classic to life

If you are a Holmes fan or a just a person who loves a good story, you wont be disappointed with this wonderful rendition of a timeless classic. Bravo, great performance!

A great way to kill two hours of commuting. Story is changed somewhat to work as a play, but it's done in an unobtrusive way. I love the humor that is added. Production is great. The audience obviously enjoyed the performance, as did I.

The final chapter is a ten minute post play discussion. If you're new to Holmes and Arthur Conan Doyle, by all means listen to it. But If you already know your "Holmesiana" it's quite missable.

play version not a perfect translation to audio

Enjoyed this adaptation of the story. The actors did a fine job. I enjoy multi voice performances. The negative of taking the audio of a play performance is certain moments were driven by the actor's expression or action but the listener can not see what caused the audience to laugh or react.

Not bad at all. Some of the accents a bit over the top or not quite how a Victorian Briton would speak, but then it was done in L.A.! 😉

Brilliant reimagining of the Classic Holmes story. Wonderfully funny in parts and great performances from all the cast. I couldn't recommend this highly enough