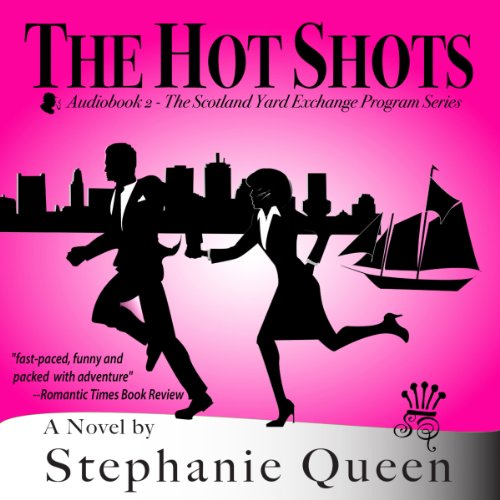 By: Stephanie Queen
Narrated by: Meghan Lewis
Try for $0.00

Would you jump off the USS Constitution into Boston Harbor with a perfect stranger? You would if that stranger was hot shot Scotland Yard detective Chauncey Miller, the usual tall-dark-handsome type, especially since he has an assassin with a score to settle who just caught up with him?

Decorator Sophia Alano's career gets side-tracked from the moment she meets hot shot Chauncey. He's on the run from a madman terrorist out for revenge when Sophia ends up targeted too. Now he must protect this spitfire while they're hunted wherever they go. They escape to London to outwit the madman. But once Chauncey catches their would-be killer, how do they go back to the lives they had before?

What listeners say about The Hot Shots

Really enjoyed the adventure the characters go on as they evade the bad guy. The author gave an exciting story with a nice romantic element and fun characters. Although it is a series, this was a perfectly fine story as a standalone. Will look forward to more by this author. Definitely helped turn my day around.

Great performance, the narration that made these characters seem even more funny and charming.

Yes, I am cranky about getting repeatedly kicked out of a fun story by the writer so insistently getting such simple things wrong.

That said, it is a fun story. Sophia Alano is an interior decorator who is about to hit it really big, with her own tv show. The day before the taping of her pilot episode, her friend and boss, Grace Young, asks her to meet a British police officer at Logan Airport and keep him busy until after dinner. He's arriving a few days early, she says, for his initiation into the Boston Police Department's Scotland Yard Exchange Program, which her husband, David, runs. They had a romantic evening planned, and don't want to cancel it.

Sophia, or Pixie as her friends call her, reluctantly agrees. Unfortunately, Chauncey Miller isn't in Boston for the Scotland Yard Exchange Program. He's in Boston to get him out of easy reach of a terrorist whose brother he shot in a previous clash. The terrorist, though, has a mole inside Scotland yard, and the same ability to hop on a plane that Chauncey does.

No one warned Pixie that this was a deep cover operation, and when Chauncey realizes the terrorist is on to them and tries to get them both to safety, he doesn't explain very well, and Pixie's initial reactions are not necessarily very smart.

I like Pixie. I like Chauncey. Even if they do both sometimes need a whack upside the head. I even like their friends and colleagues. It's a fun, fast-paced story.

But I hate getting kicked out of a story repeatedly by much of the Boston action taking place in the nonexistent Governor's Mansion, and it's hard not to scream when British citizens are addressing Sir Bradley Miller as Sir Miller, not as Sir Bradley. Repeatedly. Over and over again.

Fun, but maybe not something to pick up if such glaring and easily fixed errors bother you.

And I feel a little mean saying these things because I won this audiobook from the author, who is a very nice lady, in an event she participated in. I'm reviewing this voluntarily, obviously.