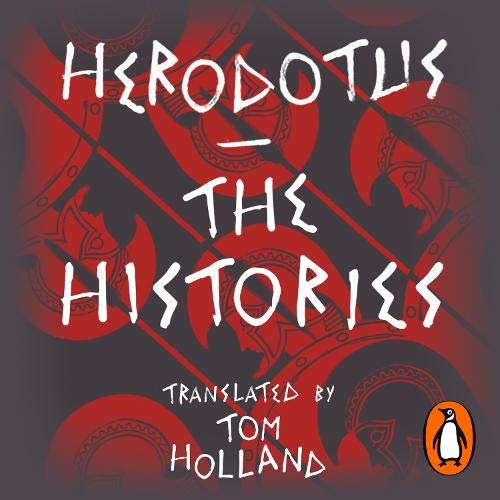 By: Herodotus,Tom Holland - translator
Narrated by: Frank Laverty
Try for $0.00

The Histories of Herodotus, completed in the second half of the fifth century BC, is generally regarded as the first work of history and the first great masterpiece of non-fiction writing. Joined here are the sheer drama of Herodotus' narrative of the Persian invasions of Greece, and the endless curiosity - turning now to cannabis, now to the Pyramids - which make his book the source of so much of our knowledge of the ancient world.

This absorbing new translation, by one of Britain's most admired young historians, allows all the drama and mysteriousness of this great book to be fully appreciated by modern listeners.

"Unquestionably the best English translation of Herodotus to have appeared in the last half-century, and there have been quite a few [...] fast, funny, opinionated, clear and erudite [...] I am in awe of Tom Holland's achievement." (Edith Hall, TLS)

"A labour of love [...] full of rattling good yarns [...] the minister for education should present each of his cabinet colleagues with a copy of Holland's admirable translation." (Economist)

"Tom Holland has been captivated by Herodotus since he was a child. His pleasure shines through his relaxed, idiomatic, expansive and often dramatic translation [...] He, like Herodotus, is a storyteller par excellence." (Peter Jones, New Statesman)

What listeners say about The Histories

Narrated in Irish not in English

Barbarians become buorrbuuurrrrriam, heir become rrrr, territory become trrrr'trrr, earlier become rr'rr not to mention the pronunciation of names which will leave you guessing . For non native English speaking people it's a struggle to listen to. In the sample he seems to speak in a much less pronounced accent. It is not the same as the actual narration. This accessible version of Histories becomes inaccessible due to this poor choice. The accent (which invokes images of 19th century Cork instead of antic Greece) feels like a big clunky elephant covering up the story itself. Awful! It doesn't fit at all with the stories being told. And such a shame I really wanted to hear them.

Tom Holland’s work deserves better treatment than this insultingly bad rendition! Anyone who bought this deserves a full refund as it is practically unintelligible & mid-pronounced throughout. Rubbish!

Irish reader a stroke of genius!

It’s possible at the moment to compare a very good reading of Herodotus in the ‘plus’ catalogue with the latest translation of the book by Tom Holland who, presumably, at least acquiesced in the choice of Frank Lacertilia to read it for Audible. I assume, also, that it’s the author directing, if not himself reading the epilogue?
Whilst the ‘English’ reading is excellent, you notice he’s far more informal and chatty in his delivery than a version I heard yearsago recorded forRNIB Talking books.
Herodotus is one is those books written, as Swamy’s Heaney put it, on ‘official note paper’ and both readings discussed here express determination to ditch the pompous nd quite inappropriate way Academia has traditionally placed the work like a statue on a ply that, and to this end Tom Holland’s translation and Liberty’s performance of it work in sync to make the point. Herodotus is spinning yarns ; a role entirely fit for a lively and engaging Irishman; well done indeed!

I have adored The Histories for years and have enjoyed them in Greek and English. This translation is wonderful and an entry for those unfamiliar with the worlds first historian.

The mellifluous beauty of the narration is fantastic!

I'd never got around to reading Herodotus, It's rather long and doesn't he just relate a lot of hearsay? My Classics professor in 1990's turned me off this text. Turns out Tom Holland has done a lot to rehabilitate the reputation of this historian of the ancient world. The translation uses more current English idiom than my old Penguin Classics edition. Herodotus describes sacrificial practices among other things that might hurt a more delicate modern ear, so the combination of Holland's almost colloquial phrasing and the flowing Irish accent of the narrator never jars and even injects a light humour to the telling. Worth the listen.