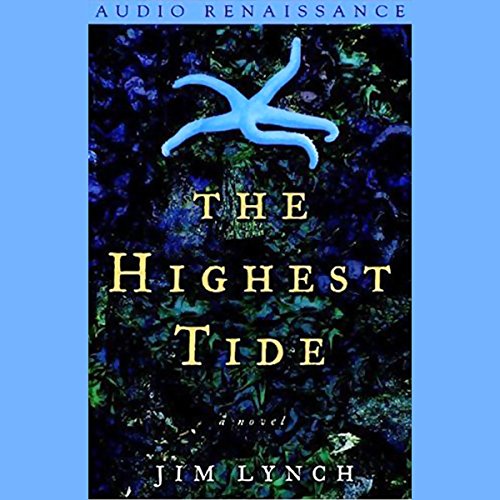 By: Jim Lynch
Narrated by: Fisher Stevens
Try for $0.00

A spellbinding first novel about a young boy's fascination with the wonders of the seashore during a summer that will change his life.

One moonlit night, 13-year-old Miles O'Malley slips out of his house, packs up his kayak, and goes exploring on the flats of Puget Sound. But what begins as an ordinary hunt for starfish, snails, and clams is soon transformed by an astonishing sight: a beached giant squid. As the first person to ever see a giant squid alive, the speed-reading, Rachel Carson-obsessed insomniac instantly becomes a local curiosity. When he later finds a rare deepwater fish in the tidal waters near his home, and saves a dog from drowning, he is hailed as a prophet. The media hovers and everyone wants to hear what Miles has to say.

But Miles is really just a teenager on the verge of growing up, infatuated with the girl next door, worried that his bickering parents will divorce, and fearful that everything, even the bay he loves, is shifting from him. While the sea continues to offer up discoveries from its mysterious depths, Miles struggles to deal with the difficulties that attend the equally mysterious process of growing up. In this unforgettable, beguiling novel, we witness the dramatic sea change for both Miles and the coastline that he adores over the course of a summer, one that will culminate with the highest tide in 50 years.

"Tender and authentic....This moving, unusual take on the summers of childhood conveys a contagious sense of wonder at the variety and mystery of the natural world." (Publishers Weekly)
"Readers, particularly those who enjoy discovering new voices in fiction, will appreciate Lynch's assertive, microscopically observant writing and respond to the precocious hero, a boy so attuned to the land that his coming-of-age exerts a tidal pull on the very molecules of his environment." (Booklist)
"A stunning light show....A celebratory song of the seas." (Kirkus Reviews)

What listeners say about The Highest Tide

I'm not sure why I bought this book but I was unexpectedly surprised that it was so enjoyable. Its has a interesting plot and lots of information on sea life which was also something that I found very interesting.

All and all, I'd reccommend this quiet book.

Pros:
Coming-of-age books can be great and moving reads. This book was loaded with emotion, and chock full of beautiful descriptions of life on the ocean (or bay, as it were) by one who obviously loves it and is well versed in the subject.

Cons:
There is plenty of what I'd expect a young teen to be thinking of and doing in this novel. But, about one-third the way into the book, I started to doubt a 13 year old could ever know as much as Miles O'Malley did. The story started to flatten for me as more and more very detailed facts about marine life, elegant quotes from Rachel Carson's writings, and very adult emotions came tumbling out of Miles. As Miles drones on about clams and the reproductive habits of obscure squid, I found my attention drifting more than once.

Very well written and while told from the point of view of a teen-ager, seemed very convincing. The details of the Olympia tidal flats and the environmental concerns and interests of the main character were fascinating. It made me want to go explore tidal pools!

Stand by Me Book 2

Maybe living on Puget Sound and being a native of this state makes me more generous in my review, but I found this book to be a delightful coming of age book. The ending was a bit abrupt for my wife, but I would rather have a few questions unanswered and left to the imagination.

While the story was interesting it was hard to get past the raspy voice of the narrator. I will not listen to him again when there are so many with nice smooth voices out there. A shame as it was a good story.

Fisher Stevens has a great voice for narration, and has done nice characterizations in his career. Unfortunately, the protagonist and his friends in this book are 13 years old. Rachel Carson's view of life on earth was fresh with dire predictions. But the counterpoint of this protagonist, his foul-mouthed and misguided friends, adults who are all "users" for their own self-interest, makes this a tiresome book. I have listened to 6 of the 7 hours, and can't wait for it to be over. Perhaps this review would be more favorable if i waited until the end, but I am so annoyed, I needed to vent by frustrations now.
I applaud Fisher Stevens, and urge people NOT to listen to this.

One Of My Favorites!

I got this book soley based on the narrator. I absolutely LOVE Fisher Stevens' voice talents. For all the people who have negative reviews about his performance, and it IS a performance, I'd like to see how well they could do creating the personalities of such a varied cast of characters!
As for the story, I learned a lot about what it's like to live in that part of the US. I have listened to this story many times over, as I do all my favorites, because it has so much information and I want to really absorb all the minutiae that the writer put into the story, not as filler, but as layers. The story and the characters in it have many layers, just like living people do, and I didn't find any of the cast to be flat.

When I start a new book, I want to learn and be entertained; I got both in this gem. That's a rarity.
Also, there's no annoying music or sound effects! Just one awesome performer reading an awesome story. Ahhh....

one of my favorites. many interesting facts.

a little glimpse into the mind of a adolescent boy. good read for teens and adults

I thoroughly enjoyed this book, particularly the discussions about the wonders of nature. Judging from other reviews, I may be unusual in this regard. (Okay, I majored in Marine Biology many years ago.) The reader did an excellent job capturing the artless enthusisasm that we as adults too often lose.
Like another reviewer, I was a bit disconcerted by the sudden ending, as if the writer just ran out of steam and quit. But all in all, I highly recommend this book, especially to people with an interest in sealife or biology in general.

I can't believe I spent eight hours listening to this. Sure, I learned a lot about the life in tidal pools, but a "coming of age" story this ain't. Totally pointless book.