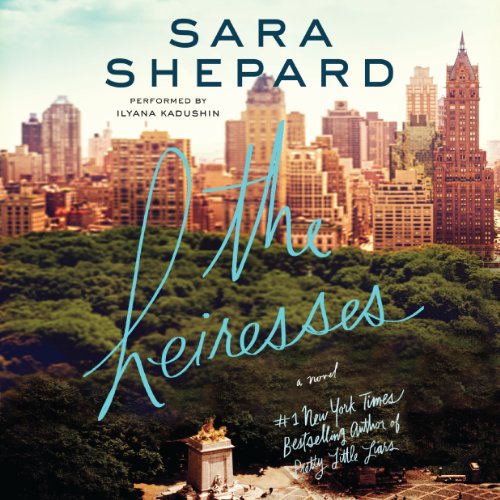 By: Sara Shepard
Narrated by: Ilyana Kadushin
Try for $0.00

From Sara Shepard, the #1 New York Times best-selling author of Pretty Little Liars, comes The Heiresses - a novel about the Saybrooks, a diamond family blessed with beauty and fortune yet plagued by a string of tragic and mysterious deaths.

The only thing more flawless than a Saybrook’s solitaire is the family behind the diamond empire. Beauties, entrepreneurs, debutantes, and mavens, the Saybrooks are the epitome of high society. Anyone would kill to be one of them. But be careful what you wish for, because if you were a Saybrook, you’d be haunted by secrets and plagued by a dark streak of luck.

Tragedy strikes the prominent family yet again on a beautiful morning in May when 34-year-old Poppy, the most remarkable Saybrook of them all, flings herself from the window of her office. Everyone is shocked that someone so perfect would end her own life - until her cousins receive an ominous warning: One heiress down, four to go.

Was it suicide...or murder? And who will be next: Aster, the beautiful but reckless girl who’s never worked a day in her life - and who’s covering up her father’s darkest secret? Her older sister, Corrine, whose meticulously planned future is about to come crashing down around her? Perhaps it will be Natasha, the black sheep of the family who suddenly disinherited herself five years ago. Or maybe the perpetually single Rowan, who had the most to gain from her cousin’s death.

A gripping, edge-of-your-seat thriller about heiresses who must uncover a dark truth about their family before they lose the only thing money can’t buy: Their lives.

What listeners say about The Heiresses

A secrets and drama mystery

Talk about drama, drama, drama. Holy cow, everyone is this book has something to hide. And breakout your notebook b/c you're introduced to nearly 20 characters in the first chapter alone.

That being said, the mystery, the secrets, and the pace of this book kept me glued to the end. If you want something to get lost in and a decent intriguing plot to keep you engaged, this book is worth the read.

🔀 Plot: This is very similar to the Pretty Little Liars series where someone has information about a group of connected people but no one knows who the person is. I grew up watching the TV show and reading the books so this was right up my alley. This story is basically about a group of cousins who all are heiresses of a family jewelry company. Everyone has their own issues and struggles they're dealing with. There a few unexplained deaths (you find out later what happened) and lots of twists / turns. I thought I knew what was happening, but I didn't until the end!

🎙Narration: I enjoyed listening to the narrator and it wasn't hard to distinguish the characters. I often will return a book if the narration isn't up to par.

📚Recommendation: I would definitely recommend this to PLL fans. If you enjoy reading / listening to stories about wealthy families, their secrets, and the lengths they'll go to keep those secrets, this is the book for you.

💭 Final Thought: There has to be a sequel because the ending was a total cliffhanger, and I need a follow up!

I am a big fan of Sara Shepard novels. They are quick, easy reads that are my ultimate guilty pleasure. However, I found this one to be a total drag. I got about 6 or 7 chapters in and was honestly getting restless from boredom. For such a dry story, this audiobook could have benefited from more animated narration, but it too was very bland. I won't be finishing this one, kinda sad I wasted an Audible credit on it. Wouldn't recommend.

Too bad of a story to write review

Forced myself to listen to this piece of nonsense- do not waste a credit on it.

So will there be a sequel?

Look. I bought it knowing what to expect. PLL for grownups which I’m FINE with. Yes, it was in the same mold as PLL, not necessarily as menacing of a villain who seems to be at every corner but still... i can get behind it. However the ending! The prologue was so interesting and left the most god awful cliffhanger that is so vague i need a sequel!! Good lord!

I bought this book on a whim not knowing what to expect and I love it. The plot and twist keep you guessing and when you think you've figured out the killer you haven't. I hope she writes more books in this series because Im hooked

The author must have used the phrase "all at once" about 45 times... And I'm not exaggerating. Decent story though.