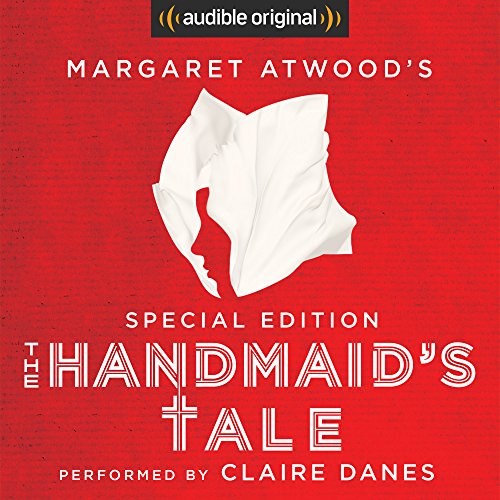 "Are there any questions?" The final line in Margaret Atwood's modern classic, The Handmaid's Tale, has teased and perplexed fans since the book's original release more than 30 years ago. Now, in this Audible Original production, listeners get some of the answers they've waited so long to hear.

Featuring an all-new interview with Professor Piexoto, written by Atwood and performed by a full cast, The Handmaid's Tale: Special Edition is a must-listen for both fans and newcomers alike. Emmy Award winner Claire Danes (Homeland, Temple Grandin) gives a stirring performance of this classic in speculative fiction, where the message (and the warning) is now more timely than ever. In addition to rich sound design that honors the audio origins of Atwood's classic, the special edition also includes a brand-new afterword from the author and an essay written by author Valerie Martin (Mary Reilly, Property).

After a violent coup in the United States overthrows the Constitution and ushers in a new government regime, the Republic of Gilead imposes subservient roles on all women. Offred, now a Handmaid tasked with the singular role of procreation in the childless household of the enigmatic Commander and his bitter wife, can remember a time when she lived with her husband and daughter and had a job, before she lost everything, even her own name. Despite the danger, Offred learns to navigate the intimate secrets of those who control her every move, risking her life for mere glimpses of her former freedom, and records her story for future listeners.

Whether you're a fan of the original novel or someone who has recently discovered it, The Handmaid's Tale: Special Edition will shock, impress, and satisfy all those who listen.

What listeners say about The Handmaid's Tale

Absolutely love the way this story was written, although I don't feel satisfied with the abrupt ending of offred's story.

I don't know why there are so many reviews asking about why there is music throughout, it is a vital part of the story when you get to the ending. Definitely recommend!

Second time is even better than the first

Title says it all. Should be required reading in all schools around the world period.

Wonderful story with excellent narrative performance. That said, what is with the ridiculous scratchy music transitions at the beginning of section chapters? The sounds bear no reference to the plot and are irrelevant. The sound engineers didn't give any breathing time between these scrunch scratches and the narrative either making the production appear amateur.

Well written, but a scary potential reality - especially with current events in very recent times (I know Margaret Atwood spoke out after the storming of the Capitol in January that when she wrote this in 1985 she never imagined it ever truly happening, and seeing it before her eyes terrified her).

I've only seen the first 3 episodes of the show, but I have purchased the DVDs of the first 2 seasons, and I know the next season (not sure if it's season 3 or 4!) starts in April. I hope to be able to watch it now that I have the full background of the book. Watching the show wasn't able to fully hold my interest at the time, a couple years ago, but I think I will be able to have a full appreciate it now. The parts of the show I can recall (and oddly, even about 2 years later I recall quite a bit of those 3 episodes! Unusual for me, especially so long after), were extremely close to the book. Anyone that has watched should read, because it's close (from what I can tell and recall) and will give even more in-depth information about what she is trying to convey about this fall of civilization.

I'm about to start book 2, The Testaments (she published this book only in Sept 2019, a long time after the original - is it updated and more contemporary or just a continuation of Handmaid's Tale, the rest of Offred's story?).


I bought this special edition audio (narrated by Claire Danes - excellent job!) that came with the extended afterword from the author, that sheds quite a bit more light on what she was writing and what she was thinking at the time. I really appreciated the additional insight! It also has an extra "classroom" lecture type setting that goes into a diary of a handmaiden. Definitely worth getting this one over the other, if you're not sure which one to go with (the extra voices are in that piece at the end - where they claim to have found a diary from the handmaiden and are discussing it in a lecture, many years later. Gives more info and insight into what life was like in a more anthropological way, even though it's just a quick segment, it's great!). I also bought the box-set of paperbacks of the 2 books together, and could read along.

There should be no need to write a review for this book. It is now Canadian classic that has been made into the TV show. I love how Margaret tell the story, although it was not what I was expected. I wish there was more answers... :)

In the late 1980's I saw a movie similar to the book. I prefer the book. Subjugation and oppression for the baby makers, history sounding off in fiction.

A gripping performance of Atwood's novel. this edition has the added bonus of an afterword by the author and a reflective essay by a critic.

Excellent and detailed story that shows us how history and the future merge together to better understand issues that are both timely and relevant in today's world.

Loved it, but one thing irked me

Clair Danes is a master narrator. I was drawn in to the story. Made to believe I could actually be hearing a firsthand account.

The one thing that bothered me was the chapter Intros. The solemn reading of the chapter number often followed by the audible click of a cassette player to play a brief clip of music, and another click to stop the music. It feels jarring. Unpolished without being purposeful. Rather than feeling jarred in the sense of "This is breifly putting the listener back into the time frame this fictional woman lived and lost", it feels like something you'd do as an angsty teen to try and add weight to a self-recorded oration of poems you'd written, without trying to edit the music in after like you would for a mix tape. Your friend is in on it. She reads the titles of each poem and runs the other cassette player. It's the kind of "serious" thing you get REALLY into at the time, but when you and your friend listen to it again as adults, it's just painfully funny.