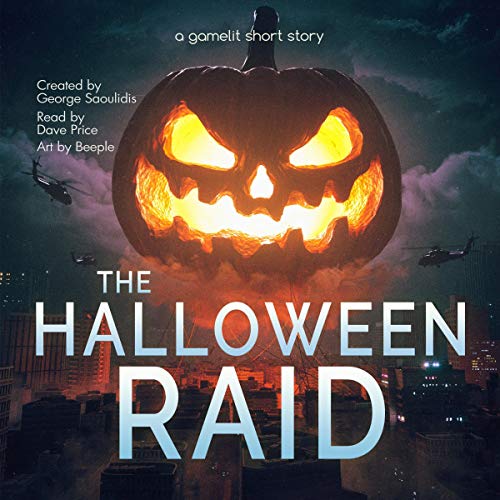 By: George Saoulidis
Narrated by: Dave Price
Try for $0.00

Trick or be eaten.

When Edward’s big brother gets lost during the Halloween raid, he decides to sneak inside the pumpkin looming over London and become a raider himself. But will he manage to survive Halloween night, when the challenges he faces seem to have changed since last year, when his best friend is also missing inside the witch’s house, and when the aliens seem to have turned this whole thing into some sort of video game?

What listeners say about The Halloween Raid

This is the fifteenth book/story I’ve read/listened to by this author and I would listen to another.
Every year people vie for a chance to enter the pumpkin and get loot. What they get is worth money in the real world. When the pumpkin appears, the area around it is sectioned off by the police. Edward stayed home to watch the raid until his brother’s team has been killed and all of them have returned except his brother. He races to the pumpkin and sneaks in hoping to find him. Edward, unlike many players, has figured out it’s a game and it’s right up his alley. Now he knows what to do.
Each chapter starts with notes from a podcast about the Halloween Raid and people’s experiences in it. This is a clever way to give us more info in few words.

This is the first book I’ve listened to by this narrator ( Dave Price ) and I would listen to another. He reads this well. He makes a distinction between the podcast readings and the action’s narrative and conversations. Each character has a distinct voice and he does well making it sound as if we’re watching the action happening.

There are no explicit sex scenes, excessive violence. There is the occasional swearing.

Ok, so I am always griping about wanting a good LITRPG short story, and I just might have found one. There really are two things that are drawbacks when it comes to this audio. The first, and I have to be realistic, are you willing to spend 3 dollars on a 55 minute story? I am. I mean hell, I spend more money on that for a comic book that I’ll read in under 10 minutes. So, if it is good it is justified. The only other thing is that this is LITRPG, it just isn’t uber crunchy because a lot of crunch would have sent the time on this soaring. So, fair warning, don’t get all hot under the collar when I say it isn’t dense with stats and stuff. This is a short story, and that’s that.

Now, I have been reading/listening to George’s stuff for some time, and I have to say that one of my favorite stories is called You Have Too Many Friends. It is really short, but very memorable. Honestly, it carried a lot of weight and has stuck in my head since I listened to it. The Halloween Raid holds its own pretty well.

The story is pretty simple, and a lot of things go unanswered, as they should in a short tale. You should be able to make your own conclusions. Basically once a year a giant jack o lantern pops up in Europe or the US (it swaps out every year) around Halloween. People or players enter the giant pumpkin t fight monsters and earn loot that can set them up. No one really knows where the thing comes from, but speculation says it is aliens. The play in the pumpkin is like this, you can return to play as much as you like year after year until you die. The play level setting is set to hardcore, and so if you die once you are out of play the rest of your life. Bad news is that 1 out of 1000 people who die in the pumpkin never return. No one knows what happens to them. They just get considered as dead, and people move on. The MC’s brother has a team that goes in year after year, and they leave Edward behind because he promised his mother that he wouldn’t go in. Edward watches his brother’s team get wiped out on live feed and he rushes to see if his brother made it back.

Now, lets just say that Edward is now the guy who has to gather some loot because his brother cannot go back inside for reasons, and the fool rushes in without any kind of gear or protection. He hopes that he can grab some loot and make his way out before he gets killed when things start to reaspawn. The Lit stuff only appears in the Pumpkin, but it is there, and while this is a lite Litrpg short it is still Litrpg all the way.
I enjoyed the story, and it did not go in the direction I was certain that it was going to. IN fact, this seems to be a very good set up for a longer novella, George does those a lot. I would like to see this idea fleshed out more fully

Dave Price handles the narration pretty well, and he provides a lot of voices and attitude in each of the characters. I think the only off fleek moment was when the witch spoke, but even as corny as it was it worked.

Final score 7.8. I enjoyed it, but don’t know if you are going to swing triple Georges for a listen. It was fun.

As seen on the LITRPG AUDIOBOOK PODCAST, please check it out on Youtube.com

An interesting short story about an annual Halloween event. A giant pumpkin appears in the sky, supposedly set up by aliens, and Raiders enter and try to loot what they can to make money. But, some of the Raiders enter and never leave.

Edward is too young to participate, but his brother and friends all have a go at the adventure. After Ed's brother is lost inside, he sneaks in to try to find him. That's when the fun begins!

It seems like this is actually a video game with experience gained and levels achieved by the players inside. But, can Ed figure out how to win this game? Or, will he follow his brother into the unknown?

I found this short story to be entertaining and enjoyed Ed's ability to outwit the creatures inside the pumpkin. He encounters witches, undead, bats, and gargolyes. I have to say that it ended rather abruptly and I wish there had been more to it. But, if you are looking for a fun, unique Halloween tale without gore but with plenty of video game vibes, give this one a try. The author is very talented at writing a short story that grabs you and gives you a lot in a short time.

The narrator did a great job and added a lot to my enjoyment. I was given the chance to listen to the audiobook version of this book by the author and chose to review it.

I'm not a horror fan so frankly I was a little bit apprehensive diving into this Halloween story. But it did not disappoint, it's a great Halloween story without actual soul-crunching horror - which, personally, I'm very grateful for.

It is a LitRPG story, so you'll like it better if you're either a gamer or simply a LitRPG reader like I am.
It leaves enough of the story's mystery unexplained - which makes it great for Halloween.

~ I was given this free review copy audiobook at my request and have voluntarily left this review.

The Halloween Raid (A GameLit Short Story) by George Saoulidis and narrated by Dave Price is a great short story for Halloween time. Sometimes it’s a hit or miss with short stories as they can leave you wanting just a tad more, but this one satisfied me and I do recommend if you’re looking for a Halloween-themed gaming story.

Every year a gaming session takes place inside a pumpkin where the raiders fight various monsters (undead, witches, gargoyles, etc.) and earn loot. When Edward’s brother disappears, he seeks him out and the adventures begin. Some of the other elements include a podcast, live viewing, added sound effects (lite GameLit), and a bit of mystery (where do the missing players disappear to).

The narrator, Dave Price, did a good job. I would listen to another story by him.

Overall I recommend, especially if you enjoy short stories with gaming elements. If the author expanded on this idea in a full story, I’d listen ASAP.

Another wonderful modern tale for the Halloween season. Aliens conduct a Halloween gaming contest each year...one in every 1000 participants doesn’t return....so why do it? The epic loot. Like a real life immersive horror game one goes in on their own or in groups with the hope of making enough to get through a year and prepare for the next contest...however there’s another secret that no one who has entered has ever revealed.

Took a couple tries to get into this book, but once it stuck, I was hooked! Definitely wish it were longer. I'll have to peep into the gamelit world now.

I absolutely loved it! The narration was great! The author did a great job with the characters. I look forward to reading more books from this author. I was given this free review copy audiobook at my request and have voluntarily left this review.

Once again the short stories talented author George Saoulidis gets it right on!
30 minutes and you are in a rat maze, an alien rat maze not knowing where it came from or how it got there but it’s a great way of making money, only don’t die because you are not coming back for a second chance.
What’s going on in the maze? Not telling.
Whats amazing is that he manages to cramp so much in so little.
Good choice of using Dave Price for narration.
Can’t not enjoy the story that’s for sure, I only wish for more but that’s the nature of short stories.


In exchange for an honest review I’ve received this audiobook.