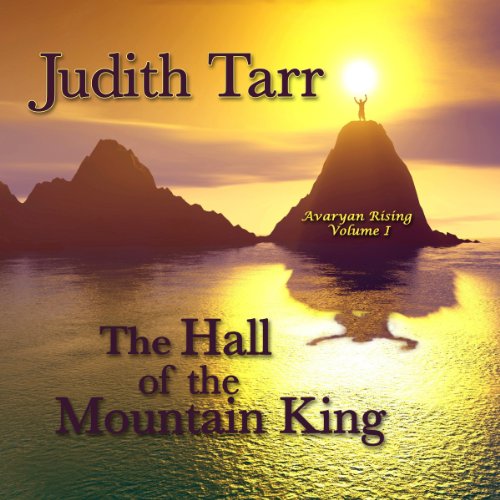 The Hall of the Mountain King

By: Judith Tarr
Narrated by: Jonathan Davis
Try for $0.00

The king's heir of Ianon is long lost, vanished into the south. Her father refuses to name his son heir in her place, though that son is a mighty warrior. Then one day a young wanderer arrives with news that both breaks and heals the king's heart: His heir is dead, but before she died, she gave birth to a son. That child, now grown, has come to take her place. But the king's son will not surrender his hope of kingship to a boy without a father, though he claims to be the son of a god.

What listeners say about The Hall of the Mountain King

Every day, for years, the King of Ianon has stood on his castle’s battlements, hoping to see his daughter coming home. He is old and she is his heir. When someone finally arrives, the king is told that his daughter is dead, but she had a son, Mirain, whose father is the god Avaryan. The grieving king opens his heart to this unknown grandson, but there are others who are not pleased with the new development — especially the king’s concubine and her son Moranden, the king’s bastard and a great warrior. Stuck in the middle is Vadin, a boy who’s assigned to be Mirain’s squire. It is Vadin who has the best vantage point and is able to witness the struggles, trials, and triumphs of two young men who want to be king.

The Hall of the Mountain King, first published in 1986, is the first in Judith Tarr’s AVARYAN RISING trilogy. You can tell by my description that it’s high epic fantasy and its premise is nothing new. In this story you’ll find much of what you’d expect of this genre — swords, horses, castles, kings, bastards, concubines, squires, soldiers, battles.

But even though I’m a little tired of epic high fantasy, and even though I’ve read dozens of stories like this, I nevertheless enjoyed the audio version of The Hall of the Mountain King. First of all, it’s performed by the masterful Jonathan Davis, one of my very favorite narrators. Honestly, I’ve got a bit of a crush on Jonathan Davis. His smooth gorgeous voice can cover over a multitude of sins. I don’t think too much covering was necessary here, but still Davis’s voice probably had a lot to do with how much I enjoyed The Hall of the Mountain King and, if the story appeals to you, I highly recommend the audio version. I know you’ll agree that the performance is wonderful.

Tarr’s story is far from original and doesn’t stand out from the hundreds of high epic fantasies on the market, but her style elevates it somewhat. In fact, it wouldn’t be far out of line to compare Judith Tarr’s style to that of Guy Gavriel Kay. Her characters are deeply developed and spend much time in thoughtful introspection and discourse which sometimes borders on the melodromatic. We’d love to hate Moranden, the bastard warrior, but because we sense his inner turmoil and the guilt he feels, it’s impossible to hate him. Mirain, the upstart prince, spends much time examining his motives and considering what it means to be a king. Although they’re very young (around 16 years old), Mirain and Valdin talk maturely about the proper role of government in society and how to balance justice and mercy. The only character who I think gets short shrift from Tarr is the King’s concubine. Her motivations are simple and obvious, of course — she wants her own son on the throne — but a little more depth to the main female character (who’s also the main villain) would have been an improvement.

The Hall of the Mountain King is a story about love, hate, jealousy, revenge, betrayal, triumph and defeat. It can stand alone, but if you enjoy it, you’ll probably want to read the next book in the trilogy, The Lady of Han-Gilen which features a feisty red-headed heroine. I’m looking forward to it.

I felt like there were abrupt scene changes that were difficult to follow. I'm not sure if it was the writing or the reader or both. Overall I enjoyed the book and will listen to the next one. Instead of marveling at unexpected twists, as I have with other books, several times it felt disjointed and stuck into a developed storyline after it was finished.