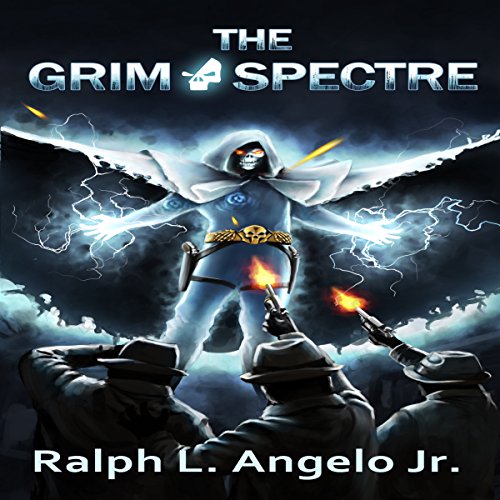 1937: The world on the brink of war. But in the city of Riverburgh, NY, 40 miles north of Manhattan, there was a different kind of war brewing. It was a war of survival for the common man. A war against the gangsters and thugs who ruled the streets and against the corrupt politicians who turned a blind eye to the evil that ran rampant in Riverburgh.

In a city where everyone had given up hope and cried to the heavens for a savior, a savior had arrived. But was he heaven sent or a monster from hell? A grim, skull-faced being glowed with a terrible brightness. A monstrous creature who wielded twin .45 caliber pistols with a deadly and practiced aim, as well as strange and frightening powers that matched his terrible glowing eyes.

But would even the terrible Grim Spectre be a match for the forces the gang lord Phylo Zeus unleashed against him? Even if he was, would the Grim Spectre be able to withstand the attacks of the corrupt mayor and his police force that dogged his every move? Caught between the twin forces of darkness encompassing the small city of Riverburgh, was the Grim Spectre too little, too late? Or can the supernatural avenger somehow defeat his many foes on both sides of the law while caught in the vise of their greed and corruption?

Find out in the New Pulp adventure The Grim Spectre by Ralph L. Angelo, Jr.

What listeners say about The Grim Spectre

Move over Shadow, the Spectre is here!!!

One of the few joys I have in life is going back in time. Being taken to places that I have never been, and eras that I missed. I have a deep and abiding love for Old Time Radio, black and white noir movies, and pulp magazines. This book harkens back to that time and place, to a time when life may not have been simpler, but was far more interesting (at least to me). This book reimagines a whole new world set in a noir world filled with bad guys with monkey DNA, voodoo, and magic.

A magic belt grants a simple man great powers he begins a crusade of justice against the darkness that is encroaching. The Grim Spectre deserves a spot right beside the Shadow, as this is purely classical pulp at its finest. I just could not stop listening. It filled up my hunger for pulpy goodness, and left me wanting more! I really wish that the author produced more, like a full fledged series. Three book minimum, at least. That is how good this book is.

Grall, who is no stranger to Pulp tales (Check out the other books he's narrated, The Black Centipede) absolutely kills it here. I am quickly coming to admire his vocal skills, and I respect the way he takes control of a story. He really molds it, and makes it his own. I fully expect to see him doing a lot more narration in the future. Even though I did receive a promo code for this review it in no way influenced my considerations of the material, and in fact, inspired me to be more honest. In fact, getting a code generally makes me harsher as a reviewer as I am more often concerned what someone like Me will decide based on my review.

Even if this is a stand alone book it really deserves a good listening too, and if you are a fan of superheroes, pulp, noir, or just fun stories then this is a perfect book to get settled into.

Loved it the time period that takes you back to days when movies were in black and white and gangsters ran the cities. The narrator's many voices , along with the colorfully written dialogue keep the story moving forward and wanting more. The twist at the end was totally surprising.

A 1930's trumpet player is bequeathed a magic belt that saves his life and turns him into the Grim Spectre--a crime-fighting supernatural entity.In his effort to rid the city of corruption he takes on an unhinged ex-priest, a professional wrestler, a vodouist, and a doctor who has injected himself with simian DNA. And then things start to get weird.

The dialogue is snappy and humorous and the actor-reader does a great job trying on the different voices.

Although I thought the story had an interesting premise, the writing could have used some more extensive editing. There were so many instances of sentences ending in prepositions that I wanted to get out my red pencil. Additionally, for the audio version, I would recommend leaving out many of the ", he/she/name said" references, particularly in light of the narrator's ability to make the characters come to life with unique voices and inflections for each. I could have easily followed along without those descriptors. Finally, the last chapter got monotonous with excessive "he/I" references to the unexpected and cool twist described. I got it right away so it was unnecessary. Overall it was a very fun listen and I would add any sequels to my listening queue. I'm interested to know what happens next. Particular kudos to the narrator for painting a picture I could see in my mind as I enjoyed the story!