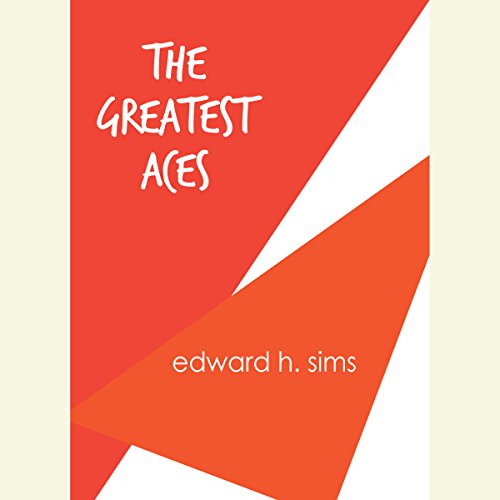 Top World War II aces of the RAF, USAAF, and the Luftwaffe recall the greatest aerial missions in this thrilling program. There is Douglas Bader, one of the best of the RAF fighter pilots despite 2 artificial legs, Adolf Galland of the Luftwaffe, who, subsequent to being shot down in France one morning, took off in another Messerschmitt that afternoon, another German ace, Hans-Joachim Marseille, the young "Pilot of Africa" who would steal into the British fighters' own formations to down several Hurricanes before the enemy could react, and Robert S. Johnson, the American who heroically defended Liberator and Flying Fortress formations.
(P) Books on Tape, Inc.

This is a great book with lots of interesting information and first-hand accounts of dogfights, compiled by the author through first-hand discussions with the aces written about. It is impressively well researched. I've read a lot of books on WWII air combat and like this one very much. If you like WWII aviation history, I'm sure you'll like this.

I think the narrator is fine -- the problem, though, is that the recording quality is quite bad. It sounds like the tapes they digitized from are much worse for the passage of time (muffled sounding) or that person who did the digitization did a very bad job. Although the recording quality is bad, to me it is intelligible -- but I suggest you listen to a sample first to make sure you are OK with it.

This book is essential for anyone with an avid interest in military history and/or aviation. The descriptions are very detailed and give you a basis to vividly imagine the experiences of the profiled fighter pilots. From unconscionable skill of Marseille, to the undeterable Bader, to the machine-like Hartmann, this book is a great insight into the world of the fighter pilot.

The audio quality is not that great, with the volume fluctuating at times. But the reader is good enough not to refrain from going audio.

I highly recommend this item.

the details in this book are amazing and i thoroughly enjoyed it but be warned the narrator is so droning you may falll asleep. But the facts are great and the subject matter makes you stick with it.

An early production for the audiobook, this release fails to achieve the same standard that we've come to expect in contemporary releases. The narrator, while earnest in tone and inflection, conveys none of the excitement that would ordinarily abound in such vivid subject matter. His style is not compelling at all, but rather matter of fact and undramatic. However, if you are a true fan of WW2 fighter aviation, you will carry on and through sheer pluck and fortitude, make your way through this work. Tally ho!

This Book Had Me Literally Holding My Breathe

Although the recording quality is marginal, this story was so compelling that I was often holding my breathe as it detailed a dogfight in what seemed like real time. I felt like I was there, in the cockpit wondering if I might be plummeting toward earth in the next millisecond. This audiobook is a great way to reduce the drudgery of the daily commute for a few wonderful days.

Poor in All Areas

This is the first time I have reviewed a book but this one was so poor I felt compelled to speak out. The author spends more time differentiating between what the proper aircraft numbers were or what the actual number of downed aircraft were than focusing on the pilot aces. The actual audio quality was terrible. The volume fluctuates and the voice quality oscillates constantly. The reader seems to put his hand on his mouth and mumble on purpose. Potentially a very interesting topic that is absolutely butchered in every aspect. If you buy you will be disappointed.

Interviewing some of the pilots that flew at the time gives an insight to how they flew. I also never realised how well the German pilots actually did.

Full of information and detail

The subject and information is excellent but the narration is very dull. the narrator just drones!
but 10 out of 10 for content.

The audio quality is terrible being from '82 and the nasal narration cuts into the content. I have found it very difficult to continue listening to what is probably an excellent book had it been narrated in an a more uplifting style and with the benefit of remastering.