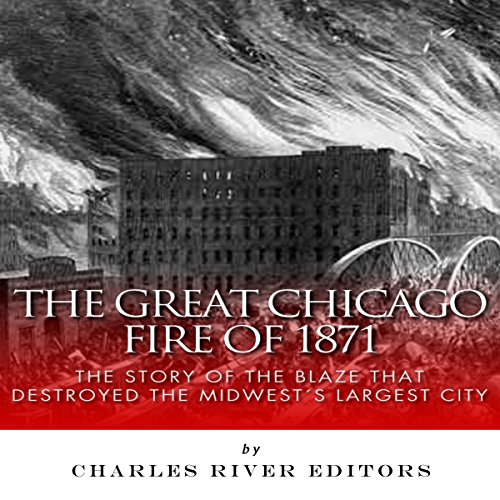 The Great Chicago Fire of 1871

By: Charles River Editors
Narrated by: John Skinner
Try for $0.00

It had taken about 40 years for Chicago to grow from a small settlement of about 300 people into a thriving metropolis with a population of 300,000, but in just two days in 1871, much of that progress was burned to the ground. In arguably the most famous fire in American history, a blaze in the southwestern section of Chicago began to burn out of control on the night of October 8, 1871. Thanks to The Chicago Tribune, the fire has been apocryphally credited to a cow kicking over a lantern in Mrs. Catherine O'Leary's barn, and though that was not true, the rumor dogged Mrs. O'Leary to the grave.

Of course, the cause of the fire didn't matter terribly much to the people who lost their lives or their property in the blaze. Thanks to dry conditions, wind, and wooden buildings, firefighters were never actually able to stop the fire, which burned itself out only after it spent nearly two whole days incinerating several square miles of Chicago. By the time rain mercifully helped to put the fire out, the Great Chicago Fire had already killed an estimated 300 people, destroyed an estimated 17,500 buildings, and left nearly 100,000 people (1/3 of the population) homeless.

Several other theories have developed as an explanation for the fire. Most of them center on people around Mrs. O'Leary's barn, but other have gone so far as to blame a meteor shower as the culprit that started fires across the Midwest that same night. As proof, they note that the country's worst forest fire in history took place around the same time in the logging town of Peshtigo in northeastern Wisconsin.

What listeners say about The Great Chicago Fire of 1871

An interesting part of history

This book was an interesting part of history that I only had a little bit of knowledge of. I wanted to dig deeper and learn more about it. The narrator was fairly dry and gave a disjointed tone to the dialogue but other than that it was interesting.