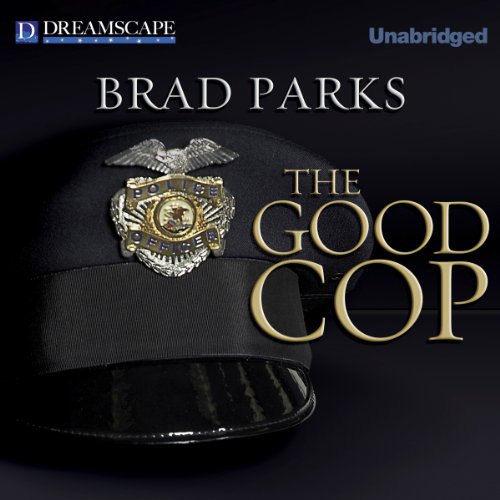 As long as Newark Eagle-Examiner reporter Carter Ross turns in his stories on deadline, no one bats an eye if he doesn't wander into the newsroom until 10 or 11 in the morning. So it's an unpleasant surprise when he's awakened at 8:38 by a phone call from his boss, telling him a local policeman was killed and Carter will be covering the story, starting immediately. He's baffled when, hours later, there are still no other reporters at the widow's house. And then he gets another call from his boss: the story's off, the cop committed suicide. But when Carter's calls to the police and the morgue are repeatedly blocked, it's clear someone knows more than he's saying about the cop's death.

What listeners say about The Good Cop

Another excellent procedural/investigative journalist book. This is one convoluted story that leaves you wondering just who is the good guy and who is bad until almost the end of the book.
This starts out with a cops murder, no suicide, no it's a murder... Oh, you'll just have to listen to it to find out.
Brad Parks writes fleshed out, believable characters. His books are full of false clues and keep you guessing right up to the end. I am really enjoying this series.
HIGHLY RECOMMENDED
If you found this review helpful please indicate so.
Thank You.

WHERE IS MACLEOD ANDREWS?

Go back to Macleod Andrews or lose me forever! Adam is ok, but Macleod has that grit in his voice that makes these books so exciting to listen. Adams voice gives you an entirely different picture of the reporter. Instead of the battered white knight, you get a cocky metrosexual. Not appealing to me. I had a tough time listening to the book as I no longer had any empathy for this main character. SO, I will now make sure to notice who is reading for me before I purchase, he makes all the difference for me.

First, I do not understand the reviewers' complaints about narration. Adam Verner is as excellent as McLeod Andrews. The Good Cop is Book 4 in the six novel Newark newspaper reporter Carter Ross series by Brad Parks. The plot is about police corruption including illegal gun sales and murder. The novel is a very good suspense mystery.

WHERE IS MCLEOD ANDREWS??

Bring back Mr. Andrews!! The story was good but the performance was barely tolerable.
Hopefully Mr. Parks will go back to having McLeod Andrews narrating his books.

Carter Ross has a pair for sure

Previous Carte Ross tales were better, this was a generic version from the three titles that preceded it. Adam Verner although struggled to produce the voices of Tommy, or "T" that I was accustom, did do a decent job.

In other Carter Ross stories the interns became such a part of the stories, in this installment the intern makes cameo's and although he is a big reason the story steered in the direction it did I really didn't feel attached to him like I did Sweet Thang, or Tommy.

What does Adam Verner bring to the story that you wouldn’t experience if you just read the book?

Adam, wasn't terrible, but I was use to Macleod Andrews, and the characters he created, Adam didn't really keep that consistent, that said I think he was great.

Do you think The Good Cop needs a follow-up book? Why or why not?

It could sequel off, because the investigation was left unclear, but I would leave it alone, not enough interest to go there.

Like the previous books in the Carter Ross series, I am enjoying this story. I am writing this a little before I am finished with in to vent. Who chose this narrator? Instead of sounding glib, sarcastic, and fun as well as intelligent and a good journalist; this narrator just sounds like a whiney complainer. I have to put the voice out of my head and concentrate totally on what is being said. Leave this narrator behind, and bring back the former narrator.

I will not be listening to the next book only because the narrator was so bad...no real emotion; felt like he was trying too hard to make "character" voices. It was a miserable experience.

Would you try another book from Brad Parks and/or Adam Verner?

Brad Parks yes Adam Verner no. Verner destroyed every single character in these books. His accents and the way he plays the characters is aggravatingly terrible. He changes the main character from a confident wise cracking guy to a little cry baby with no back bone. The homosexual Hispanic who was funny and lively becomes boring, and his accent sounds like your drunk friend pretending to be Hispanic but just sounds like himself drunk.

Plot yes. Narrator just made me angry the entire time.

He would be great for a book where there are no characters in it.

What character would you cut from The Good Cop?

Bring back the previous narrator. He was fantastic. If these narrators were superheros the last narrator is superman, this narrator is a dolphin Aquaman rides.