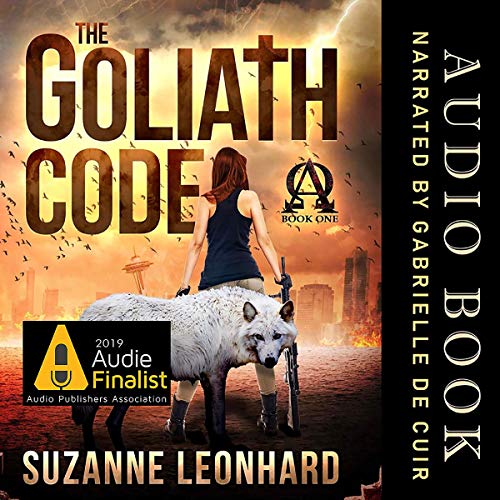 By: Suzanne Leonhard
Narrated by: Gabrielle de Cuir
Try for $0.00

Audie Award finalist for Faith-Based Audiobook of the Year 2019.

"A nail-biting page turner. The characters are compelling and real, the setting devastatingly dystopian, and the action-packed story, as original as anything I've read in a very long time. This is a big event series that should be a Hollywood franchise." (Jim Thompson, Original Content)

The end has come, and there's nowhere to hide.

America is a wasteland trapped in a suffocating volcanic winter. Millions are dead or missing, and precious resources are running low. Cloaked in a smothering haze of darkness and doubt, hopeful citizens in 16-year-old Sera Donner's small mountain town of Roslyn, Washington, bend their efforts toward survival, believing unity will save them. Their solidarity soon dissipates into a toxic mixture of greed and fear when the new survivalist regime begins deciding who will live and who will die. Sera's disabled twin brother is at the top of their kill list.

Steadfast Micah Abrams is Sera's only comfort in the chaos, but he's placed his faith in an ancient hope that she finds difficult to understand. With her brother's life on the line, can she really trust a schoolyard bully suddenly turned prophet?

As the bloody battle within the community reaches a shocking climax, a powerful military leader marches into town with an imposing force, offering food, water, and promises of salvation. Everyone in Roslyn thinks the worst is finally over.

What listeners say about The Goliath Code

Having already read the book last year, I wanted to read it again and decided to let audible read it to me. Wow! Gabrielle de Cuir does a fantastic job bringing the characters to life with her versatile voice. I'm so looking forward to book 2.

Great start of a series with moral overtones

I thought there were some amazing characters and dialogue scenes in this novel. Also, the descriptions of the post-apocalyptic Seattle were truly terrifying. There are very strong Christian/Moral undertones, but even being an agnostic myself, this did not take away from the strong characters. No preachiness, though. The narrator's voices are excellent; she does good men and amazingly all ages very effectively. This should be a TV series, or a movie. I hope there's a Volume 2!

An eruption at Yosemite has immersed America in total chaos. Many people died and many cities were destroyed. Sera and her brother David have lost their parents during the cataclysm, and with that, David’s hopes of becoming normal. David and Sera’s father was a scientist specialized in genetic modifications using nanobots, and he had the key to give his son a normal body. David and Sera will face the challenges and danger, each one in a different way, while they witness how Europa saves America in an unexpected way.

This book had all the ingredients to be an enjoyable post-apocalyptic story for young adults. We have two strong main characters, who antagonize each other at times. We see a clear evolution in Sera and the way she decides to take matters in her own hands. There is also deception, mystery, and blood, lots of blood.

The plot was a bit chaotic at times, but it kept me interested. Somehow, I didn’t understand Sera’s decision of hiding what happened to her mother. It seemed to me at first, that it was going to be a decisive event in the book, one that could change things. And it did, eventually, just not in the way I expected, and I have to say that I felt disappointed, and even cheated towards the end. There were also other characters’ actions that I found strange and that made them less real.

There is some romance, as anyone would expect in a YA book. Not too much, but there nonetheless. I added some value to the story and created some dynamics among several of the characters.

The next point may be controversial. There is quite some religion in this book. A lot more towards the end, and for me, this is not a good thing in a sci-fi/post-apocalyptic book. I think authors, in general, should understand that their books are read by a vast public and that many of their readers might be atheists or have a religion other than Christianism. For me, this high level of religion in a book is a total setback. Things just don’t work in the end if you pray and put up with things. Things work out if you fight and work hard for them. Or that is what I would like to read in a book.

Gabrielle de Cuir did a good job narrating this book and bringing Sera to life. I found her style a bit too languid for this kind of story, but it did not disturb me. Her voices were credible and each character had their own voice and style. The last, and more religious, part, of the book benefited from de Cuir style.

Audiobook was provided for review by the author/narrator/publisher.

Narration was spot on!

Love and extreme loyalty to family in spite of their rather obvious flaws, is on display full force in this story about what happens to non-believers after the "white light" takes children under age 12 and believing adults out of this world. Interesting choice to use Donner as last name of primary characters. Serafina Donner, her disabled twin David, the Grandpa and Dad are all fighting to survive after Yellowstone erupts changing everything around it. Micah Abrams is Sera's protector, yet because he bullied David before everything went sideways, David hates him. There's lots of action, militia movements, divisions and sacrifices both good and bad. These increase exponentially when the the Prieter and his new religious government come to town. Exciting!

I’m starting book 2, The Prophet, immediately. The author catches your attention and holds it from start to finish. Suzanne is a detailed oriented writer. I like that very much. It’s quite easy to picture her words in action. By the end I was emotionally invested in the characters. I need to know what happens next...

Book would be better without the profanity

The story line was great, exciting, and kept our attention. We were surprised by the profanity in a "faith" book though. The book would have been just fine without it!

The story was weak, the audio was... really bad... although the topic was interesting.

What was most disappointing about Suzanne Leonhard’s story?

too much jumping around.... hard to follow at times...

Would you be willing to try another one of Gabrielle de Cuir’s performances?

It was interesting and I did finish it.