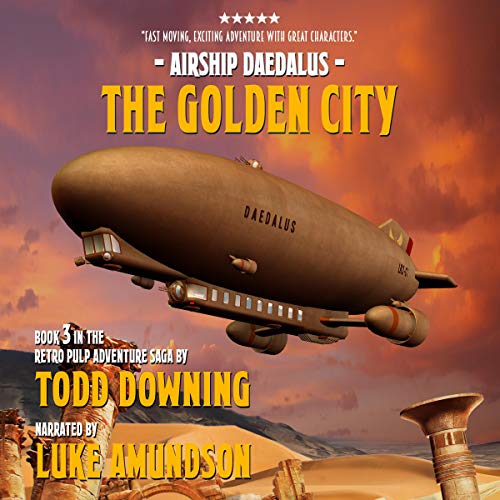 By: Todd Downing
Narrated by: Luke Amundson
Try for $0.00

A lost airship. A buried city. A new threat.

Following a shootout with Silver Star commandos and a desperate dogfight into the eye of a storm, the airship Daedalus limps back to London - only to discover a former crewmate has gone missing, along with his own airship and its crew!

Using nothing but a few scant clues and their own wits, Jack, Doc, and the Daedalus crew must locate the airship Percival and their old friend "Duke", encountering myriad dangers along the way and culminating in a chaotic battle through ancient ruins beneath the Egyptian desert.

What listeners say about The Golden City

I have read and listened to almost all of the books in this series and without a doubt it is one of my favorite pulp fiction universes I can't get enough of. Todd Downing really dives into character details and his writing is so vivid. The narration on these is really good too. I have fallen in love with the characters both protagonists and antagonists alike. ACTION PACKED is an understatement for the story telling. Just as you begin to relax .... you find yourself again riding along in a fast paced, action adventure drama that continues to surprise you at each turn. I fell deeply into this well devised universe of a post world war period backdrop. With the fantastic battle between a nefarious evil magic cult and the special team of heroes assembled to fight them and save the world. This story plays as good as any fast paced action adventure you will ever watch and of course it has the Daedalus and its crew to root for. Keep them coming!

This one is a cliff hanger... and I’m so desperate for the next book, I’m considering just getting the printed version (even though I have NO TIME for reading). It had been a while between the last audible book and this one and I wondered if I should go back and refresh myself on what had happened, but that was not necessary. The history was so perfectly sprinkled about that I was able to listen to it feeling like I had just finished the last book. I am completely loving this series. The protagonist characters are endearing, and the “bad guys” are oh so bad. And the action, mystery, fantasy, are all up my ally. Keep them coming! :)