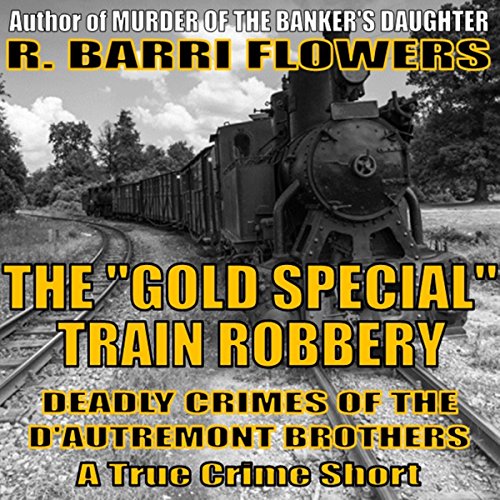 From award-winning criminologist R. Barri Flowers and the best-selling author of Murder of the Banker's Daughter and Murder at the Pencil Factory comes a powerful new historical true crime short, The "Gold Special" Train Robbery: Deadly Crimes of the D'Autremont Brothers.

On a Thursday night on October 11, 1923, the Southern Pacific Railroad Express Train Number 13, called the “Gold Special” was ambushed as it headed through the Siskiyou Mountains of Southern Oregon and into the Siskiyou Tunnel from Seattle en route to San Francisco.

The bandits, in search of gold and cash, used dynamite and gunfire to murder four crew members before fleeing in an explosive crime of greed and violence reminiscent of Old West style train robberies.

With law enforcement stymied in their attempts to identify and apprehend the killers, they turned to American criminologist Edward Oscar Heinrich to help crack the case. Often been compared to fictional British detective Sherlock Holmes, Heinrich's early forensic detective work led to identifying the culprits as brothers, Ray, Roy, and Hugh D'Autremont, loggers who fancied themselves as Jesse and Frank James like outlaws.

Often referred to as the “Last Great Train Robbery”, the story of the D'Autremont brothers' daring attempted heist, dramatic escape, and years on the lam before finally being brought to justice are chronicled in the pages of The Gold Special Train Robbery.

”Selected as one of Suspense Magazine's Best of 2011 books.” (John Raab, CEO/Publisher on The Sex Slave Murders by R. Barri Flowers).