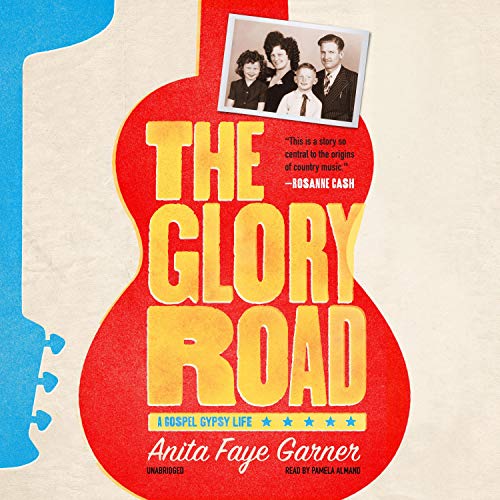 By: Anita Faye Garner
Narrated by: Pamela Almand
Try for $0.00

Anita Faye Garner grew up in the South - just about every corner of it. She and her musical family lived in Texarkana, Bossier City, Hot Springs, Jackson, Vicksburg, Hattiesburg, Pascagoula, Bogalusa, Biloxi, Gulfport, New Orleans, and points between, picking up sticks every time her father, a Pentecostal preacher known as “Brother Ray”, took over a new congregation.

In between jump-starting churches, Brother Ray took his wife and kids out on the gospel revival circuit as the Jones Family Singers. Ray could sing and play, and “Sister Fern” (Mama) was a celebrated singer and songwriter, possessed of both talent and beauty. Rounding out the band were the young Garner (known as Nita Faye then) and her big brother Leslie Ray. At all-day singings and tent revivals across the South, the Joneses made a joyful noise for the faithful and loaded into the car for the next stage of their tour.

But growing up gospel wasn’t always joyous. The kids practically raised and fended for themselves, bonding over a shared dislike of their rootless life and strict religious upbringing. Sister Fern dreamed of crossing over from gospel to popular music and recording a hit record. An unlikely combination of preacher’s wife and glamorous performer, she had the talent and presence to make a splash, and her remarkable voice brought Saturday night rock-and-roll to Sunday morning music. Always singing, performing, and recording at the margins of commercial success, Sister Fern shared a backing band with Elvis Presley and wrote songs recorded by Johnny Cash and many other artists.

In her touching memoir The Glory Road, Anita Faye Garner re-creates her remarkable upbringing. The story begins with Ray’s attempts to settle down and the family’s inevitable return to the gospel circuit and concludes with Sister Fern’s brushes with stardom and the family’s journey west to California where they finally landed - with some unexpected detours along the way. The Glory Road carries listeners back to the 1950s South and the intersections of faith and family at the very roots of American popular music.

What listeners say about The Glory Road

From beginning to end, I embarked on Anita Faye Garner’s matter of fact journey along The Glory Road not knowing where the road might lead and found the ride riveting, uncomfortably revealing, down-home hilarious and unexpectedly honest to its most noble credit. I felt strategically immersed in a world I thought I might somewhat be familiar with and soon determined I would be learning quite a few things to my pleasure. I experienced this brilliantly descriptive Gospel Gypsy Life with wonder and mouth watering delight throughout especially as the many food items were described. I could hear the hands clapping and instruments playing and the tent poles being inserted for the next meeting.

The music had its own seat in the car for me whether in a rehearsal or a performance and wherever the road would lead it was center stage.

It was a delight to experience compelling and relatively easy characters to get a fix on yet deceivingly so because life is complex with a need for a narrator to clarify sometimes and I was reminded of that often by the narrator.

Imagining the reader (Pamela Almand) as Anita Faye often helped keep me in real-time motion on the road with the family and all the characters their lives experienced, essentially validating that this narrator was indeed “there when it happened.”

The focus to answer and honor the call, lifestyle, yearnings etc to be and/or exist and live in the truth of each character’s conviction was for me substantial throughout, hauntingly palpable at times and it never let up with each chapter rolling into the next as effortlessly as the next town the Joneses might roll into, beautifully ripping me apart when I least expected it with unapologetic politeness juxtaposed on raw adolescent innocence, hopes, dreams and betrayals.

Life is complicated and this honest offering of sacrifice did not disappoint. I perceived tears even when none were acknowledged as rolling down a cheek. I’ll admit, some were mine because relationships are wonderful and messy and none more so than family.

The Glory Road also inspired me to think along the lines of my own journey and destination. That’s when a book has done its job for me. I highly recommend taking this trip.