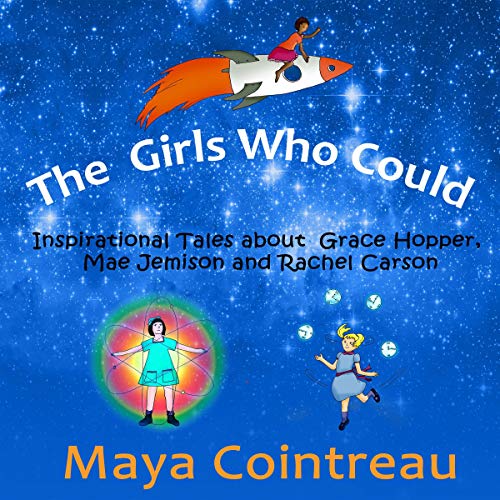 The Girls Who Could: Inspirational Tales About Grace Hopper, Mae Jemison and Rachel Carson: Books 1 - 3

What do computer coder Grace Hopper, astronaut Mae Jemison, and scientist Rachel Carson all have in common? They were girls who could do anything they set their minds to! Each woman started with a dream, followed her passion, and achieved big things.

The Girls Who Could is a fun series of stories about real women who have made a difference in the world through inspired action. By giving children examples of women who are doing amazing things, children can grow up with a template of achievement upon which to grow and expand their own dreams and goals. The fun, rhyming prose helps kids connect easily with the message in each story.

The Girl Who Could Talk to Computers is the first book in The Girls Who Could series. It tells the story of young Grace Hopper, the inquiring girl who wrote the first computer compiler program which gave birth to the first computer language, COBOL. After amazing Grace helped bring us into the modern computer-age, she dedicated her life to teaching and inspiring young people to dream big.

The Girl Who Could Dance in Outer Space is the second book in The Girls Who Could series. It tells the tale of Mae Jemison, the creative girl who became a doctor, an engineer, a dancer, and an astronaut. Mae Jemison teaches us that art and science are natural expressions of creativity and imagination. Nurture them both, and go where your dreams take you!

The Girl Who Could Sing with the Birds celebrates nature and the environment and is the third book in The Girls Who Could series. In it, we explore the world through the eyes of Rachel Carson, the author and biologist who inspired the environmental movement that gave birth to Earth Day. Rachel Carson teaches us that every life on our planet is precious and that science should work with nature for the good of all. Together, we can keep the world a beautiful place.

What listeners say about The Girls Who Could: Inspirational Tales About Grace Hopper, Mae Jemison and Rachel Carson: Books 1 - 3