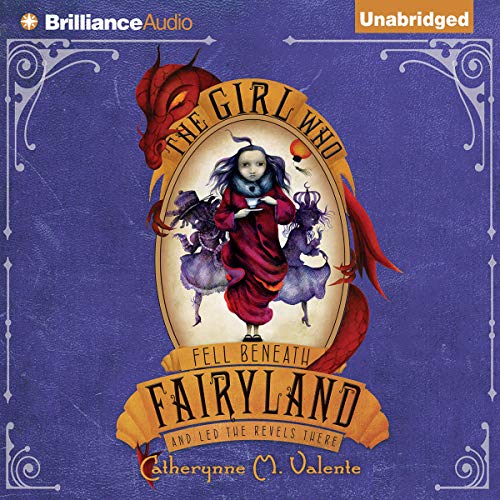 The Girl Who Fell Beneath Fairyland and Led the Revels There

September has longed to return to Fairyland after her first adventure there. And when she finally does, she learns that its inhabitants have been losing their shadows - and their magic - to the world of Fairyland-Below. This world has a new ruler: Halloween, the Hollow Queen, who is September’s shadow. And Halloween has no intentions of giving Fairyland’s shadows back.

Fans of Valente’s best-selling first Fairyland book will revel in the lush setting, characters, and language of September’s journey. Listners will also welcome back good friends Ell, the Wyverary, and the boy Saturday. But in Fairyland-Below, even the best of friends aren’t always what they seem....

Would you listen to The Girl Who Fell Beneath Fairyland and Led the Revels There again? Why?

I will definitely listen to this book again. It was perfect squeal to the first fairyland book!

Several times toward the end of the book I was pleasantly surprised by what was revealed. It was like the magician revealing the rabbit was under the cloth the whole time and you were so sure he put it in the hat. It was amazing. SJ tuckers narration was prefect!

September again! I loved Catherynne M. Valente's first book about her intrepid, heartless 12-year-old heroine (hey--all children are heartless), The Girl Who Circumnavigated Fairyland on a Ship of Her Own Making (2011). It effervesces with the joys of language, imagination, story, and Faerie, while staying grounded in the depth of life. Valente's second book featuring September, The Girl Who Fell Beneath Fairyland and Led the Revels There (2012) is almost as exuberant and extravagant as the first. September's father is still away at war in Europe, and she's still an outsider at school, especially now that she has a big secret--her first trip to Fairyland--that she can't tell for fear of making it evaporate into dream, when, celebrating her 13th birthday, September runs after a rowboat flying over the Nebraska wheat fields back into Fairyland.

She quickly learns that all is not well in Fairyland, thanks to her decision early in her first adventure to give up her shadow to save a Pooka girl. September's independent shadow, Halloween "the Hollow Queen," rules Fairyland-Below (the underworld of Fairyland), leading too many revels there, and working on a scheme that may end up separating Fairyland from our real world. And it's September's responsibility to put things right.

The plot is episodic, with September traveling through Fairyland-Below on an impossible quest, meeting a series of outre and charming characters, from fairies in some distress to unattached and wild shadows. Valente inserts into her Faerie elements of science fiction (or steampunk), like a Fairy Queer Physickist (AKA a Mad Scientist), who has invented a Squid Hole (more versatile than a Worm Hole) and a Sameness Engine, among other machines that find their own uses.

Valente ties it all together around quests, shadows, and hearts. She creates a Questing Physicks, full of apt laws, grail equations, field studies on "free-range treasure," classifications of quest types (e.g., a Theseus Quest) and quest objects (e.g., Useful, Deceitful, Mutable), an explanation of the E.K.T. (Everyone Knows That) Field, and even an elusive GUT (Grand Unified Tale).

As for shadows, Valente exploits the idea that our shadows embody our hidden innermost selves, so that shy people have bold shadows, wicked people good ones, and so on. She also explores the degrees to which our freed shadows would be our siblings, our selves, or independent entities. The relationship between shadow, id, and magic is interestingly developed: "The body does the living; the shadow does the dreaming."

As for hearts, September is growing one as she begins the fraught process of becoming an adult, experiencing kissing, wondering what she'll do when she grows up, and learning about loss. As a result, "Like a branch that seems one day to be bare and hard, and the next explodes with green buds and pink blossoms, her heart, which as we have said was very new and still growing, put out a long tendril of dark flowers."

The virtues of September's first book are on full display in her second: The vivifying of inanimate objects (dresses, rivet guns, books, etc.), the fresh takes on typical fairyland/fantasy elements (minotaurs, sibyls, sleeping royalty, etc.) and obscure ones (Glashtyns, Monaciellos, Bakus, etc.) and new ones (the Onion-Man, the Jarlhopp, the Hreinns, etc.), the plays on language (a Goblin Market sells your Bone's Desire, "Necessity is the Mother of Temptation," and Questing, Queer, and Quiet Physicks are the ps and qs you should mind, etc.), the cool concepts (the Mines of Memory, the Narrative Barometer, operating slantwise like a chess bishop, etc.), and the witty statements on life ("Children are natural practitioners of the Queer and the Questing, for childhood is nothing less than a quest through a queer country" and "a labyrinth, when it is big enough, is just the whole world").

And the vivid descriptions and potent similes:

--It made a frightful sound that echoed all through the wood, like a bone bursting.

--It tasted like the thing other carrots meant to copy.

--Flight was not a thing she did, it was a thing happening inside her, a thing thrilling through her reptile blood and her armored skin, a thing jumping in her bones and reaching up to catch the heels of the air.

Other things to admire about the book(s). September might not be a pure-white child, with her chocolaty brown curls and her father's black eyes and dark hand. Valente reverses typical genre gender roles, presenting a sleeping prince and male and female same-sex loving characters. She avoids setting up one-dimensional evil antagonists, but is at pains to show that, as a female Minotaur librarian says, we are all monsters of one kind or another. The worst things people do tend to be from acting without thinking about the consequences (one of Halloween's nicknames is "Princess of Doing What You Please").

Sometimes I felt that Valente's imagination, prose, and "sly narrator" wax a bit too rich, like a dinner of chocolate truffles, mousse, and cake. Perhaps the second book is a bit talkier than the first. The interludes with two crows feel unnecessary. And at times I nearly thought, "Is it possible that the rules from traditional fairy tales etc. that Valente gleans and codifies make her otherwise original play with the genre seem less fresh?

Although I missed Valente reading her book in her appealingly ironic and sympathetic drawl, as she did with the first one, the professional reader of this second book, S. J. Tucker, is fine, doing a nice base narration voice plus appealing voices for Saturday, Ell, September, Avogadra, Aubergine, Iago, etc. And people who disliked Valente's reading style should like Tucker's.

Readers interested in self-aware, richly-written, densely imagined contemporary fantasy that plays with genre conventions and stays unpredictable, funny, moving, beautiful, and disturbing by turns should like this novel (though they should start with the first book in the series).

Can We Just– Wow.

Did that reallt just happen? I– what?? Talk about flooring us with a last sentence...

Valente's "Fairyland" books leave me wjth that feel-good feeling that makes you just want to hug yourself as you are filled with joy at the adorableness of everything.

Imaginative, unconventional, adventurous, emotional and magical, this series is adorable and whimsical and really important, for it teaches about forgiveness, friendship, perseverance and the idea that nothing is ever as it seems. It teaches about family and explores the nature of "good vs. evil" and how everything is always more complicated than that.

This series is has fast become a favourite of mine and I will love it to the end of time. I recommend it for children, teenagers and adults alike, for everyone can get something out of it.

Have you listened to any of S. J. Tucker’s other performances before? How does this one compare?

S.J. Tucker is a true performer. Every character was brought to life with his or her own nuances. Truly an enjoyable listen.

Excellent book, I'm excited to read more in the series and this is one I can listen to again and again. Great for all ages.

This Whole Series is Fantastic

Would you listen to The Girl Who Fell Beneath Fairyland and Led the Revels There again? Why?

I would absolutely listen to this book again- the storytelling and humor are -great-. I absolutely love this whole series. While I would say this is the weakest of the three I've listened to, all three books are fantastic- this one being the weakest is just a testament to how great the others are.

What was one of the most memorable moments of The Girl Who Fell Beneath Fairyland and Led the Revels There?

I think the most memorable moment for me is the moment September comes face-to-face with Halloween for the first time. It's a great moment.

Probably the scene where September comes face-to-face with Halloween for the first time. It's just a great scene.

This book didn't have the kind of impact the first one did, which was kind of the problem I had with it. The ending act was still great though, and I'd say when September makes her final decision concerning Halloween was pretty moving.

The narrator they got for this one simply isn't as good as the author was in my opinion. She grew on me over time, but I was pleased to hear the author come back for the third book.

I'm so glad I chose this book. The writing, adventure, and magic were well worth it! A clean read, and one I will recommend to ANYONE.

One of my favorites series

i love this series. the narration was really good, but different from all the other books.

These books are the greatest stories written in a very long time. Timeless and ageless, a story who sits beside Alice in Wonderland, and The Wizard of Oz for tea time. Where they sit and talk about their heroines.

It was a good story it was a bit difficult to follow the characters. I also dragged on many chapters.