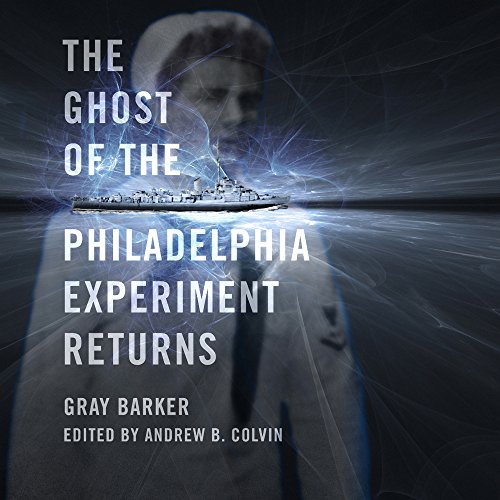 The Ghost of the Philadelphia Experiment Returns

By: Gray Barker,Andrew Colvin
Narrated by: Troy A. Rutter
Try for $0.00

The Ghost of the Philadelphia Experiment Returns was the last book published by legendary ufologist Gray Barker. At the time (1984), it was considered too "conspiratorial," and met with opposition in mainstream ufological circles.

After compiling the book from articles in his own newsletter, Barker suddenly died, and the controversial bound edition was pulled from distribution. Luckily, New Saucerian was able to locate the prototype, and has made this wonderful work available - at last - for the general public to enjoy.

In these pages, Barker deftly explores the lore of the Philadelphia Experiment, offering revelations on a variety of notorious characters, such as Carlos Allende, James Wolfe, Leon A. Seoul, Dr. Franklin Reno, Michael Ann Dunn, the Oppenheimer brothers, and William L. Moore, whose books on the Roswell UFO crash, the Bermuda Triangle, and the Philadelphia Experiment made him the highest grossing UFO author of all time.

Barker also shares interesting material from researchers Morris K. Jessup, James Moseley, Dennis Pilichis, Charles Berlitz, and Anna Genzlinger, the Miami housewife who was led by Jessup's ghost to investigate his death, and who uncovered several fascinating tidbits not only about his possible murder, but also about the CIA's role in covert mind control experimentation.

What listeners say about The Ghost of the Philadelphia Experiment Returns

Narrator makes this book easy to listen to.

First off-yes, I understand that there is a chapter that is unedited. It is my understanding that this was a small error in the submission of files. The actual edited version is being submitted. I actually liked hearing this chapter-hear me out: it gives a glimpse into what the narrators actually have to do to provide listeners with an enjoyable experience. Also, I'm glad to know that I'm not the only person out there who can make a mistake :)

As for the rest-the narrator's careful attention to accuracy and enunciation are refreshing. His grasp of the literature made this book easy for me to listen to. I listen to more fiction than non-fiction, which reads differently. In a book that was otherwise a bit unorganized, he made it entertaining. I appreciated the reading of the letters and interviews included-it was easy to understand and grasp what was being said by whom without seeing it in print. I just wish the author had organized them better. I've listened to a lot of audiobooks over the years, and can really appreciate the narrator's attention to pronouncing words correctly and consistently.

Would you recommend The Ghost of the Philadelphia Experiment Returns to your friends? Why or why not?

Depending on their interest in the subject matter-maybe.

Which character – as performed by Troy A. Rutter – was your favorite?

Did The Ghost of the Philadelphia Experiment Returns inspire you to do anything?

What would have made The Ghost of the Philadelphia Experiment Returns better?

The audiobook lacked editing in some areas. There are some spots where the narrator can be heard restating a line he has already read. This gets unlistenably bad in audiobook chapter 16: Letter from Carlos Allende to William Moore. In this chapter, it appears there was no editing whatsoever, as the narrator can be heard repeating many lines, having difficulty with pronunciation, and sighing with frustration.

What other book might you compare The Ghost of the Philadelphia Experiment Returns to and why?

I'd compare this book to Gray Barker’s other book, “Men in Black: The Secret Terror Among Us”. This book has some related material, dealing with Carlos Allende, and the mysterious Varo edition of Jessup’s “The Case for the UFO”.

The chapter about Ohio Bigfoot hunting was absolutely weird and fascinating. Worth the price of admission for sure!

For the extreme science and crypto zoological fans

I found this book to be well narrated. That is the only good thing I can really say about it. This is one book that should really be abridged. It reads like... a boring report. I would have thought, given the subject matter that the author would express a bit more enthusiasm. It was a long, ongoing struggle to finish this book.
I received a free copy of this audio book from the author, narrator or publisher in exchange for an unbiased review.

Trot Rutter sounds line he reads at a fith grade level. He puts me to sleep with his boring monotone. Terrible.

BORING!Boring reading by Troy A.Rutter.Boring descriotion of the 'event'
I was given this book free for an honest review

The Ghost of a good book!

2 books in a row i hated. That is a first! The Ghost of the Philadelphia Experiment Returns by Gray Barker and Andrew Colvin is not a book. It is a story that is so silly i did lough out loud of it. I have no interest in the subject! No interest at all! *znoore*

Troy A. Rutter, poor man! What a voice work for a terrible book with a lot of silly stories in it! You did good man, you did good.

Thank you to Jonathan, Files corrected

First, let me thank Jonathan for bringing the erroneous chapter to our attention. The bad audio chapter has been corrected. Those who have downloaded it can delete it and re-download to get the fixed version. For those new listeners, I hope you find the story as interesting as I did when I started to discover more about The Philadelphia Experiment, Big Foot, and Mothman. I have given it a rather neutral rating since I am a bit biased. I hope you enjoy.

"I was provided this audiobook at no charge by the author in exchange for an unbiased review via AudiobookBlast dot com".

loved the book. its a great read.