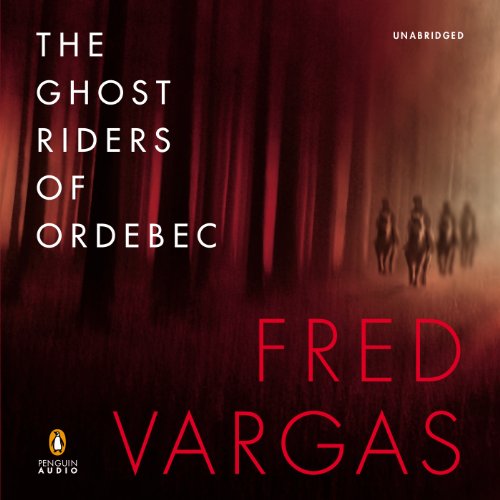 The Ghost Riders of Ordebec

A # 1 French and Italian best seller from the three-time winner of the CWA&'s International Dagger Award.

More than 10 million copies of Fred Vargas's Commissaire Adamsberg mysteries have been sold worldwide. Now, American readers are getting hooked on the internationally bestselling author's unsettling blend of crime and the supernatural.

As the chief of police in Paris's seventh arrondissement, Commissaire Adamsberg has no jurisdiction in Ordebec. Yet, he cannot ignore a widow's plea. Her daughter Lina has seen a vision of the Ghost Riders with four nefarious men. According to the 1000-year-old legend, the vision means that the men will soon die a grisly death. When one of them disappears, Adamsberg races to Ordebec, where he becomes entranced by the gorgeous Lina - and embroiled in the small Normandy town's ancient feud.

What listeners say about The Ghost Riders of Ordebec

Would you listen to The Ghost Riders of Ordebec again? Why?

Yes, I would listen to it again but I would prefer to listen to others of the same series. I love mysteries. I love them to be thoughtful. These characters are well developed, the plot is complex yet able to be followed. What sets her apart, is that though very intelligent, the central character doesn't take himself too seriously.

I would compare it to books by Louise Penny. As with Penny, the characters are endearing, but Vargas has a delightful sense of humour, that we see a tiny bit of in the character of Ruth in Louise Penny's books.

more Fred Vargas in US, please

yes, The story is compelling. The character development makes me want to listen to all books in the series, before and after this 9th one.

Have you listened to any of David Rintoul’s other performances before? How does this one compare?

I did listen to one Donna Leon book. I will pay attention to the books he perfporms as he does an excellent job of it.

The several moments during which the characters attend with kindness to animals made me fond of them all.

I know that Fred Vargas's books have been translated into English, and I suspect they are available at Amazon UK. We need them to be made available in the US, please.

If you could sum up The Ghost Riders of Ordebec in three words, what would they be?

PLEASE PLEASE using the same reader, provide all Fred Vargas' books. She is too good to miss and bless the narrator, he does not butcher the French.

Finall the Commissionaire has a voice!!!

I have read all of Vargas' books - brilliant. The Concessionaire's crew of investigators are one of a kind. Vargas is a best seller in Europe and world famous. Please put all of her books on audible!

This book perfectly blends the social and psychological elements of the mystery novel. It kept me on my toes for the whole ride. Please record more of Fred Vargas's Adamsberg mysteries in English!!

Would you consider the audio edition of The Ghost Riders of Ordebec to be better than the print version?

No. Just a lot of fun if you want a good listen of a light novel.

Other Fred Vargas books. Because they're written by Fred Vargas. This was particularly enjoyable.

Which character – as performed by David Rintoul – was your favorite?

oh for goodness sake: it was just a good read all round.

Who was the most memorable character of The Ghost Riders of Ordebec and why?

Just could not get past the third chapter

I tried several times and then gave up. I returned this to Audible for a credit. Thank you to the awesome Audible staff for their quick and friendly customer service.

The characters were deeply eccentric and amusingly drawn. The plot was multifaceted and logically resolved. The narrator was superb.
A riveting and extremely enjoyable audiobook experience.

If you could sum up The Ghost Riders of Ordebec in three words, what would they be?

The characters really had 3 dimensions, and the narrative held the reader's attention.

What does David Rintoul bring to the story that you wouldn’t experience if you just read the book?

He became the characters - set the tone beautifully by his reading.

If you could rename The Ghost Riders of Ordebec, what would you call it?

Myth and Death in Normandy

I love the Adamsberg series. Vargas' books are well worth the time. *Please* look into copyright permissions for the earlier books in the series!!