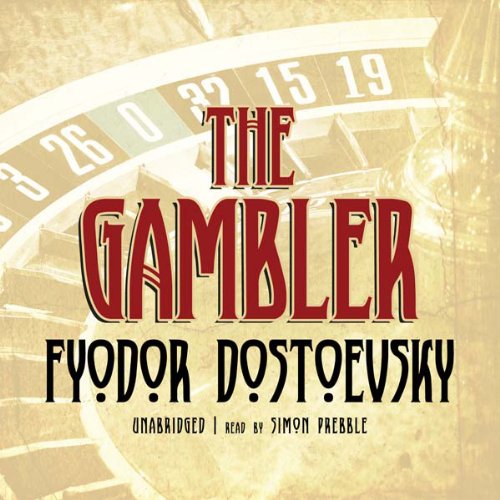 By: Fyodor Dostoevsky
Narrated by: Simon Prebble
Try for $0.00

The Gambler paints a stark picture of the attractions—and addictions—of gambling. Using skillful characterization, Dostoevsky faithfully depicts life among the gambling set in old Germany. This probing psychological novel explores the tangled love affairs and complicated lives of Alexey Ivanovitch, a young gambler, and Polina Alexandrovna, the woman he loves.

Fyodor Mikhaylovich Dostoevsky (1821–1881) was born in Moscow, the son of a surgeon. Leaving the study of engineering for literature, he published Poor Folk in 1846. As a member of revolutionary circles in St. Petersburg, he was condemned to death in 1849. A last-minute reprieve sent him to Siberia for hard labor. Returning to St. Petersburg in 1859, he worked as a journalist and completed his masterpiece, Crime and Punishment, as well as other works, including The Idiot and The Brothers Karamazov.

“Dostoevsky gives me more than any scientist.” (Albert Einstein)

What listeners say about The Gambler

Pretty entertaining, not being too long is a plus. There's a bit in French in conversations so make sure you're cool with not understanding every word if you don't speak French, for the most part you get the idea from the context.

Gravity of odds and the frailty of human hope

This is a crushing novel. It is one of those classic stories where the narrator is crushed by the weight of his desire, by the gravity of odds, and by the frailty of human hope. Within Dostoevsky's short novel there exists an almost existential subtext, an underlying risk of ruin; where the longer you live, the greater your chance of losing everything. Dostoevsky leaves the reader with small wins, decent runs, and hopeful conceits that tempt the reader to believe that one might walk away from life with love, fulfilment, and yes plenty of lucre ... but alas time, the vig, and death (that croupier bitch) all weedle your last gulden and mortgage your soul's last breath.

A master psychiatrist this Fyodor

A masterful dissection of the personality of the gambler, the Russian in the eyes of a French and English in the eyes of a Russian.
I learned more from this man than I learned from some of the best teachers and professors of psychiatry in the 20th and 21st century.
To understand gambling from within, every psychiatrist should read this book.

This is probably the best narration that I have heard from any audiobook. Simon Prebble’s ability to seamlessly transition between languages and accents. I was astounded! Bravo!
Also the story is fantastic.

I liked this book but did the mistake of reading it after the amazing Crime and Punishment narrated by Anthony Heald. It was fascinating to go into the mind of a gambler and what it does to one's personality and life.

This was a crazy story and I loved how it was read. Bravo! I will be looking this Narrator up!

Brilliant and captivating in story and performance

A beautifully rendered story. From the outset to the final moments this story holds your attention, heart and mind. Rich in characterization, articulate, and deeply insightful of human behavior. The reader was properly dramatic and well differentiated the many characters which made the story easy to follow. Highly recommend.

Simon Prebble is a true pro, so even a mediocre book would be a pleasure to listen to if he reads it. This book is more than mediocre, but does not at all measure up to Dostoevsky’s great novels. The psychological aspect of the gambling addict (or any other addict) is handled quite well; the relationships between the characters are sort of pathetic and aren’t so credible. Oh, sure, there are some people whose only interest in someone is for their money. But that’s kind of cliched. And Alexei’s love of Polina is based on what? It’s so shallow. Is it not just some infatuation? Does he have some kind of psychological problem to be willing to be so absurdly submissive to someone? I would like the psychology behind that to have been explored, but it isn’t. If nothing else, this story shows how fickle a man can be (when usually, such fickle behavior is depicted in female characters). Though the story is just fair, the writing is excellent (and I’m sure it is better in the original). This was a freebie, so I’d recommend it if you’ve got a few spare hours.

Great for its time

Elegant description of the psyche of a gambler. Narrator has done a great job of impressions.

I just loved it ! It really shows the life of a gambler as bad as it is ...

I would recommend this book to a friend, the literature of the gaming table is fertile ground for sustaining suspense. The story moves along at a fair click. No doubt helped by the fact the Dostoevsky was writing under under a very strict deadline.

The most interesting is the glimpse given of European Casino life in the 19th century which features fleetingly in other works of the era (I'm thinking of Vanity Fair).The least interesting aspect is the complete lack of likeable characters. I don't know whether or not Dostoevsky deliberately made it so, as this is my first foray into his dark world, but its hard work when you don't really care about any of the characters.

Which character – as performed by Simon Prebble – was your favourite?

The General, around which the other characters orbit and nicely centres the story. In fact he's the only one I had any sympathy for and by the end I was hoping he would triumph.

Was The Gambler worth the listening time?

Yes and you can get the book free as well.

Simon Prebble does an excellent job, although maybe the Duchess could have been toned down a little (she sounded like Lady Bracknell!)

A powerful story of human complexeties.

Would you be willing to try another one of Simon Prebble’s performances?

Ideally not, I found the regional accent he gave the genteel Englishman unlikely for a person of this class and utterly annoying.

Would you consider the audio edition of The Gambler to be better than the print version?

The story is compelling and he is not a great novelist for nothing.