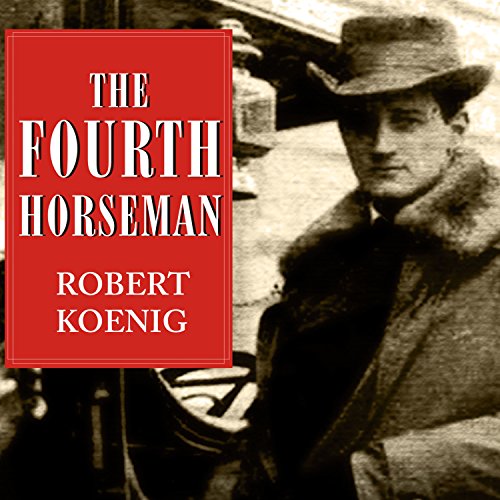 One Man's Mission to Wage the Great War in America
By: Robert Koenig
Narrated by: Norman Dietz
Length: 15 hrs and 6 mins
Categories: History, American
3.5 out of 5 stars 3.4 (15 ratings)

The story of Anton Dilger brings to life a missing chapter in American history and shows, dramatically, that the Great European War was in fact being fought on the home front years before the U.S. formally joined it. Dilger was an American doctor who grew anthrax and other bacteria in a rented house as part of a secret mission for the German Army in 1915. The Fourth Horseman tells the startling story of that mission, led by a brilliant but conflicted surgeon who became one of Germany's most daring spies and saboteurs during World War I - and who not only pioneered bio-warfare in his native land but also lead a last-ditch German effort to goad Mexico into invading the United States. It is a story of mysterious missions, divided loyalties, and a new and terrible kind of warfare that emerged as America, in spite of fierce dissention at home, was making the decision to send its Doughboys to the Great War in Europe.

Dilger is a fascinating analog for our own troubled times. Having thrown off the tethers of obligation to family and country, he became a very dangerous man indeed: a spy, a saboteur, and a zealot to a degree that may have so embarrassed the German High Command that, after the war, they ordered his death rather than admit that he worked for them.

"Koenig has researched with great thoroughness and written with great clarity." (Booklist)

The first half of this audio was extremely interesting and very enjoyable although much of it was a concentration of background information of the family of the main character, Anton Dilger --- much time is spent relaying facts about how important horses were to the conduct of war, very fascinating indeed, and something I never realized.
The historical backdrop went back to the Civil War. Getting to the activities of Anton Dilger and his involvement took quite a bit of time but time well spent.
The importance of disrupting the shipment of horses from the U.S. to Britain and France was a priority for the German war effort. One of the first organized attempts at germ warfare was directed at infecting horses bound for Europe, compliment of Anton Dilger.
The second half of the audio was very much less interesting than the first --- the details became draining to say the least. I found myself drifting off quite a few times and had to “rewind” to catch up with what had happened.
Too bad one cannot just buy the first half because it was so captivating.