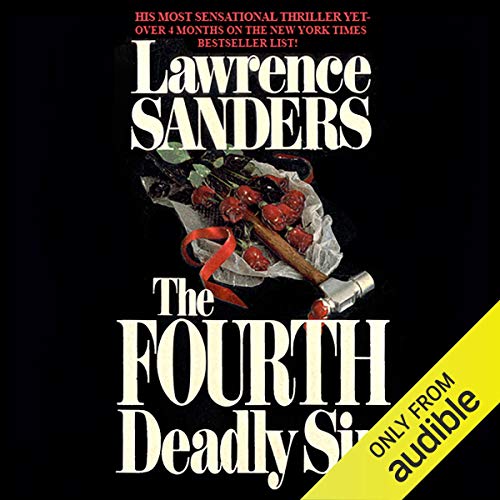 By: Lawrence Sanders
Narrated by: Marc Vietor
Try for $0.00

Here is the gripping story of a brutally-murdered New York psychiatrist; ex-cop Edward X. Delaney, who must crack the high-profile case; and the only six suspects: the doctor's own patients. It's a blockbuster with twists and turns that will keep you up nights and suspense that "never lags" (The Washington Post). And it is a crowning achievement - by the man who wears the crown as king of the thriller.

What listeners say about The Fourth Deadly Sin

Imagine sitting on your grandfather's lap and him reading you a nice bed time (Murder Story) Again I have to give props to a story that can leap a couple of decades and still hold my interest. Marc Vietor is as good as they get. He breathes life into Edward X Delaney, and I feel like I know him. I wish he was my Grandfather. So I don't seem too cold - I barely knew my grandparents =0) It amazes still how detective work was done before ATM camera angles solved every crime. I love the psychology in Lawerence Sander's books. It's a shame that the one bad review is an Oxymoron. Dated and sexist - Uh yeah - If it's dated - It's going to have parts that don't have modern thinking. Here's an update. Slavery was abolished a while ago - But I don't read 'A Time to Kill' and say 'That book was racist' - I just enjoy the story. Jeeeez ussss.

No question in my mind, the "Deadly Sin" series of Lawrence Sanders ranks right up there with the best of Conan Doyle. Detective fiction just doesn't get any better than this -- innovative plots, interesting characters with enough quirky habits to make them memorable (no one forgets Frances X. Delaney's sandwiches, wet or dry) with clear lines drawn between good and evil. Today, it seems, most fiction writers seem to prefer flawed heroes, men and women battling their own demons. Sanders chose not to create that kind of protagonist, or at least he didn't in this series. While he's no patsy, tough-guy Delaney is refreshing in his steadfast uprightness, his devotion to his family, his honesty and integrity. No character flaws are apparent -- although I suppose in today's world that might constitute a flaw in itself. Still, this kind of completely honorable and admirable character is a delight, at least for a change. No steamy sex scenes, either, something else that's a welcome change. Violence? Some. But not random or gratuitous. What violence there is, is appropriately applied.

But what really puts the "Fourth" installment in the Deadly Sin Audible series over the top in terms of excellence is the narrator, Marc Vietor. This book is loaded with minor characters -- not only a multi-member police squad who work on the crime, but also over a dozen suspects, all of whom are investigated and questioned in depth. They run the gamut of New York -- thugs, professors, psychiatrists, shut-ins, ex-boxers, women, some domineering, some shy, some nosy, plus dockworker, new immigrants, a couple of druggies and a gay or two. In all, they represent every different ethnicity and strata of society. Through it all, Vietor gives each a distinctive voice, so well done that in listening to this book -- more so than just reading it -- you feel as though you're really seeing the character. Every one of them becomes someone you can picture in full detail -- in terms of "theater of the mind", this book is off the scales.

I've read the entire series twice, have listened to them all once, and am now listening to them all again. That is, after all, what you do with classics of this caliber -- enjoy them over and over, even though you know very well who 'did it', and how it will end. Solving the mystery is just one objective in reading the Deadly Sin books -- enjoying the story is quite another.

Where does The Fourth Deadly Sin rank among all the audiobooks you???ve listened to so far?

I've fallen for Edward X. He is gruff, lovable, stubborn.

Yes. The murder takes place right away and I love the building of the suspect list.

How Edward X knows human nature and how to get to the bottom of murder. He is fair, recognizes good talent and rewards it.

Brilliant! Why wasn't there more?

I loved every minute of the entire Deadly Sin series and this book is no exception. A terrific mystery (better, I would say than the other whodunnit, the Second Deadly Sin) it examines the multitude of methods detectives use in cracking a case or a suspect. The murder is interesting and as always, Delaney is a great character to watch investigate it.

The only downside to reading this book is the knowledge that Sanders never finished the series. It ends with this book and for that reason I would recommend buying this book AND one of the earlier ones, preferably the First Deadly Sin, so you can understand the style of writing that Sanders engaged in. Three deadly sins remain, and the only killer to this books satisfaction is that Sanders didn't examine them with his wit, his passion and his thrilling style like he did with this (and the other three) books.

It's a masterful series, one you should read. I only wish it was complete.

Another Awesome and Unexpected Ending.

All i can say is that some will love the ending and some will hate it. Either way, great great book. Highly recommend.

Not my favorite Delaney book but I still recommend since I love this character and the way he operates, never by the book...the story is quite interesting and open the door to the world of psychiatry and what they go through with their patients. Marc Vietor gave a great performance and I only wished that there were more books on this series. I will definitely miss Delaney.

What did you love best about The Fourth Deadly Sin?

The story is fast moving and captivating

Made me feel like I was the main player

The narration was top rate.

All I all I liked this book. I absolutely LOVE the narrator. I have to admit I also enjoyed the politically incorrect dialogue. The ending was very obvious, but all in all a good purchase.

Now I've done it. I've read the fourth entry in the Edward X Delaney saga,and loved it. I now have to reread the first three. This is more of a who done it than one or three and not as long.Several new interesting characters make for an intriguing story.Not my favorite Sin but very good.

I guessed who the killer was early on, which was disappointing. The book also has shades of misogyny which really bothered me. I won't go into detail because it might be a spoiler.