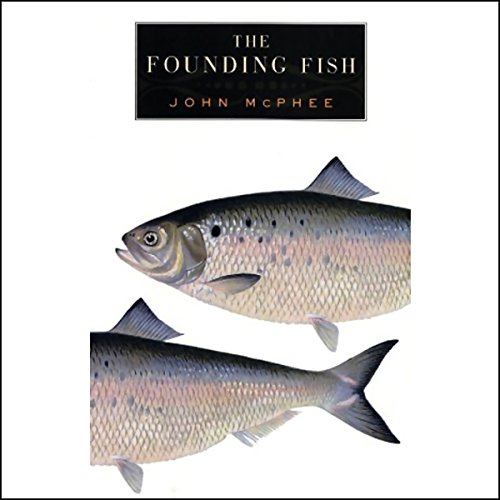 Few fish are as beloved, or as obsessed over, as the American shad. Although shad spend most of their lives in salt water, they enter rivers by the hundreds of thousands in the spring and swim upstream heroic distances in order to spawn, then return to the ocean.

John McPhee is a shad fisherman, and his passion for the annual shad run has led him, over the years, to learn much of what there is to know about the fish known as Alosa sapidissima, or "most savory". In The Founding Fish McPhee makes of his obsession a work of literary art. In characteristically bold and spirited prose, inflected here and there with wry humor, McPhee places the fish within natural history and American history. He explores the fish's cameo role in the lives of William Penn, Washington, Jefferson, Thoreau, Lincoln, and John Wilkes Booth. He travels with various ichthyologists, including a fish behaviorist and an anatomist of fishes; takes instruction in the making of shad darts from a master of the art; and cooks shad and shad roe a variety of ways. Mostly, though, McPhee goes fishing for shad, standing for hours in the Delaware River in stocking waders and cleated boots, or gently bumping over rapids in a chocolate-colored Kevlar canoe. His adventures in the pursuit of shad occasion the kind of writing, at once expert and ardent, in which he has no equal.

"McPhee reaffirms his stature as a bold American original. His prose is rugged, straightforward, and unassuming, and can be just as witty. This book sings like anglers' lines cast on the water. It runs with the wisdom of ocean-going shad." (Publishers Weekly)
"McPhee is in great form here, as informative as always but also funny, unusually self-revealing, and quite passionate." (Booklist)

What listeners say about The Founding Fish

Reading McPhee is like watching a brilliant tennis player you've followed for years. I know his moves. I can even predict most of his methods, but I keep coming back to watch him put it all together. He is masterful. He makes the incredibly difficult work of narrative nonfiction seem effortless. Beautiful prose swims right up to McPhee and jumps into his net or flops right into the pages of his book.

Once again McPhee matches a microhistory (the American Shad) with great characters (biologists, fishermen, sportsmen, presidents, even his wife) present and past, amazing locations and takes you completely through the subject. You emerge from tail of the book knowing the history, the biology, the life, the death, the taste and the debate surrounding America's founding fish. He shows you every single bone in a boney fish. Read and released.

I enjoy nonfiction and John McPhee. As an audiobook, it's kind of neat to have John McPhee read it himself, but in printed book form it would be easier to skip over parts not of interest. This book contained many long fishing stories with too much minute by minute detail. Fishing fanatics might enjoy this - if that is you, then go for this book. I was expecting history, economics, science, and there was all that and much, much more. Making the darts, history of dams, biology of fish, deep sea fishing contests, many interesting topics and very comprehensive coverage. Now that I'm done, when I think back over what I learned, I do find it was worthwhile. But during the listening, I felt tortured at times.

I just started this, and the reader (John McPhee) sounds awful. The sound engineers should have edited out all the breathing noises and the sound of his tongue arranging itself in his mouth. Awful. I'd really like to get my money back. My fault, I guess, because I didn't listen to the preview.

asleep in the deep

John McPhee's books often start slow, but become steadily more and more interesting and informative as you go along. The Founding Fish mixes his obsession with fishing for shad with info on this amazing little fish, and it's importance in American History. Unfortunately the reader sounds like the slow kid in your third grade reading circle, making McPhee's slow story development unbearable. I can't get through it even after 4 determined tries. If you like McPhee, try The Pine Barrens, or Oranges, or Basin and Range, or The Delta Pumkinseed.

Know what you are getting into

Hearing an author read his or her own work seems always to be somewhat of a trade off. You can hear a deeper connection with the material but the overall quality of the reading is not equal to some of the more skilled and practiced readers of audiobooks. It is clear that John McPhee is obsessed with shad. With such a long book on one subject I hoped for more history and cultural history (there is some) along with all the fish stories. Too much detail on things like shad skeletons and ichthyology for me. In printed format I could have easily skimmed those parts. In audiobook format that dull minutiae was unavoidable.

Warning: Do not read if hungry

Wonderful writing, as always, but oh so unfair! The last chapter will have you buying a plane ticket to where such foods are served!

I really enjoyed this book. It was fun, super nerdy if you can consider fishing nerdy, and very insightful. Must listen at 1.25 speed, otherwise it is very slow. But at that speed, the author, who is clever and witty, sounds good.

audiobook that changed me as a fisherman forever

the audibook itself is like listening to an older gentleman tell random stories for hours and hours. At first I couldnt get a grip on this, but as I continued to listen closely I learned some interesting perspectives that I have never been exposed to. It made me a more complete and educated fisherman, and i would recomend it to anyone, its slow at times but honestly I cant wait to listen to it again. I often found myself going back and playing a section again and again. john mcphee isnt your average audibook narrator but I am glad to have him presenting the story as he orginaly intended.

I don't know what kind of reading this book would have made, but it made for very good listening. I suppose fish stories should be 'told' after all, and I suspect the author sensed this, because he did the narretion hiimself, and his voice was a good fit.

I expected a somewhat scientific treatment, so I was surprised at all the fishing, and, though I don't fish, it was engaging (I haven't fished since childhood - fresh water perch in Michigan's Lake St. Clair - usually hooking a hundred an outing back in the mid-1960's) (along with my thumbs).

Curiously, when his local was near where I live now (the Delaware Basin), it tugged at some long-lost primal urge to go fish.

So it was quite listenable - good while multi-tasking.He covered a lot of ground, from fishing in various locales to tbe issue of Dams to gear to cooking to tournaments to museums to oil rigs, and even to PETA, in an unbiased manner.

Surprising was finding out why he named the book "The Founding Fish".

What would have made The Founding Fish better?

Has The Founding Fish turned you off from other books in this genre?

diction was odd, the way he finished words sounded odd

If you could play editor, what scene or scenes would you have cut from The Founding Fish?

all his personal accounts of fishing

Kurlander wrote Cod without being boring