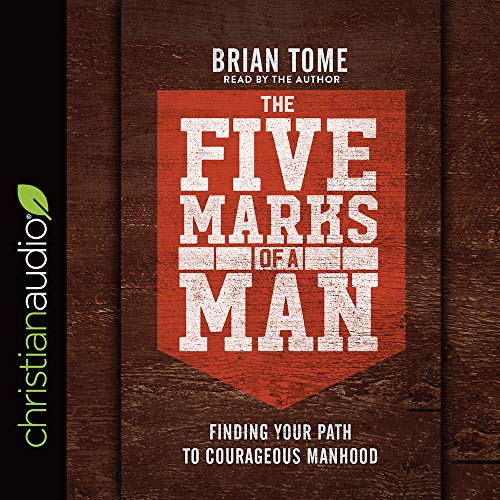 The Five Marks of a Man

These are the five marks of a man. It's not enough to just know them. A real man aggressively pursues them on a daily basis.

Drawing from his own experience and the lives of others, Pastor Brian Tome calls on men to examine themselves and take steps in the direction of a fully realized manhood that honors God, respects women, elevates others, and works purposefully for an end greater than their own satisfaction or pleasure. It's time for men to step into their honorable place in the world and lean into a new reality - one defined by strength, purpose, and honor.

What listeners say about The Five Marks of a Man

This book made me want to become a better man. The book pointed out many flaws that I really wasn’t aware of, it made me realize that I have been a boy for 39 years of my life and as I move into the second half of my life, I need to “MAN UP!”

This book teaches so many great ideas (marks) of what makes a man a man and not just a boy. This is for my son and for my daughters. They all need to know what a real man looks like.

It was a great book I couldn't put it down I listen straight through it and actually started taking notes and thank you for the questions and also the things that make me challenge myself from listening to the book I'm in a men's group now and this is our reading material right now.

I really enjoyed listening to the book. The five marks of a man are really valuable to learn about. It is necessary for self reflection and growth in these areas. I appreciate the vulnerability, factual information, and plans within it. I recommend this book to any man who wants to grow in their faith and manhood.

I strongly believe that every man AND woman should read this book. It helps a woman how to understand and better serve & love the males in her life. It also points boys of every age in the direction of manhood and gives them the push they need to start the journey there.

Not only was the content off the chain, but I love the way it was read. Felt more like a conversation. Mix of Can't Hurt Me with righteousness and Godly wisdom. Not preachy at all. As soon as I finished it, I took action with a vision God gave me through inspiration here. Thanks my man!
www.kirkmsamuels.com

I wish I had been taught these principles earlier in life so that i could be passing on this wisdom to others. I am a 41 year old half man half child at best. I have allowed my father's suicide (when I was 10 years old) to arrest my emotional developnent and spiritual growth. I'm ready to be a man (better late than never). This has been profoundly inspiring and I pray for the strength and fortitude to pursue my estranged manhood as though my life depends on it. Thank you for making this available and for delivering these principles in such a powerful way. - Drew

It’s a must read. The transition from being a boy into a man is profound.

Loved having Brian Tome himself narrate. thanks for the kick in the pants. I needed it!

Yea... Going to listen 2 this a few times a month!

Been needing to hear some direction like this for a while now. Author's voice made HUGE difference. Thank you.