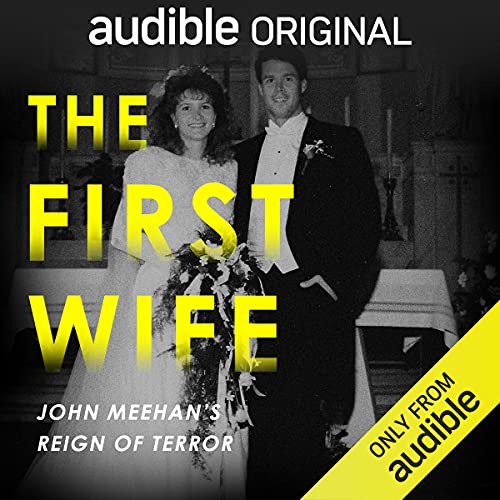 Many listened to the Dirty John podcast, which introduced the world to John Meehan, a dangerous serial predator who infiltrates the life of Debra Newell and ultimately dies at the hand of her daughter, Terra. But there was an overlooked story that’s now being told, in full, for the first time. In The First Wife: John Meehan’s Reign of Terror, Tonia Bales recounts her harrowing experiences as John’s wife of 10 years and the mother of their daughters, Emily and Abby. Highlighting new details and revelations, Tonia shares the abuse she suffered from the man she once believed to be her soulmate, but who ultimately revealed himself as a coercive and controlling terrorist. Through exclusive archival materials and all-new interviews with the people who knew her and John best, uncovering long-held secrets and including perspective from their daughters, Tonia embarks on a re-investigation of the man she thought she knew. The multiple bombshells she unearths include one that will change her and her daughters’ lives forever.
©2021 AYR MEDIA, LLC (P)2021 Audible Originals, LLC
Aliza Rosen
Tonia Bales
Laura Richards

Aliza Rosen is the founder and president of AYR Media, a full-service production company focused on premium unscripted and documentary content encompassing podcasts, television, and film.
A veteran producer and development executive with expertise across all mediums, Rosen launched AYR in 2019. The company has a diverse slate of premium podcasts set with Audible/Amazon Studios and iHeart Media—more than five new shows launching in 2021 alone—with additional projects and IP in development for television/streaming and podcasting.
Rosen previously co-created and executive-produced CBS’s The Case Of: Jon Benet Ramsey, which premiered in 2016 to record ratings; was a consulting producer on Oxygen’s documentary series Dirty John: The Dirty Truth; and also served as a consulting producer on E!’s For Real: The History of Reality TV, set to debut in 2021.
She spent seven years as executive vice president of development for Philadelphia-based S3 Productions, where she built the company’s slate from the ground up, developing series in myriad unscripted genres and selling to networks such as Discovery and A&E, among many others.
Rosen began her entertainment career producing news and documentary programming for CBS, VH1, and Oxygen. Her directorial debut and first feature film, the award-winning Latter Day Jew, premiered in 2019, screening at festivals across the country.

Tonia Bales has been in continuous clinical anesthesia practice since 1991 after graduating from the University Hospital School of Anesthesia in Cincinnati, OH. She started her career in San Bernardino, CA and has practiced in Murfreesboro, TN and Dayton, OH. She now resides and practices outside of Atlanta. As the ex-wife of the infamous and disgraced "Dirty" John Meehan, Tonia’s contributions were instrumental to the international success of the LA Times podcast Dirty John. Tonia’s harrowing experience was portrayed in the Bravo TV show of the same name and the companion documentary, Dirty John: The Dirty Truth. She has also been featured on Dateline NBC, Inside Evil with Chris Cuomo, and Today with Megyn Kelly.

Laura Richards is an international expert on domestic violence—coercive control, stalking, homicide and risk assessment was the Head of the Homicide Prevention Unit for New Scotland Yard. Laura was also trained at the FBI Behavioral Analysis Unit. Laura’s also been covering and analyzing John Meehan’s behavior since 2017 and was a producer on Oxygen’s Dirty John: The Dirty Truth. Laura was also a co-creator and executive producer on The Case of: Jon Benet Ramsey (CBS), which premiered to record ratings in 2016, and was followed by a second season, The Case of: Casey Anthony (Oxygen), that aired in 2018. Richards is also the executive producer of the forthcoming film Jennifer 42.

Rachel Louise Snyder is the author of Fugitive Denim: A Moving Story of People and Pants in the Borderless World of Global Trade, the novel What We’ve Lost Is Nothing, and No Visible Bruises: What We Don’t Know About Domestic Violence Can Kill Us. Her work has appeared in The New Yorker, The New York Times Magazine, and The Washington Post and on NPR. She was named a Guggenheim Fellow in 2020.
No Visible Bruises was awarded the 2018 Lukas Work-in-Progress Award and received starred reviews from Kirkus, Book Riot and Publisher’s Weekly. It was a named one of the best books of 2019 by the Los Angeles Times, Esquire, Amazon, Kirkus, the Library Journal, the Economist, BookPage, and others. The New York Times included it in their Top Ten books of 2019. No Visible Bruises was also a finalist for the Kirkus Award, the National Book Critics Circle Award, the Los Angeles Times Book Award, and the Silver Gavel Award. It won the 2020 BookTube Prize, the 2020 New York Public Library’s Bernstein Award for Excellence in Journalism, and the 2020 Hillman Prize for Book Journalism. Snyder holds a joint appointment as a professor in journalism and creative writing at American University.
Con Artists, Hoaxes & Deceptions
Show more Show less
.
ORIGINALS

What listeners say about The First Wife: John Meehan's Reign of Terror

I accidentally binge listened and this story is incredible! I admire the strength of Tonia!

This podcast has been one of my favorite binges. I always enjoy a story where the woman rises up and proves her amazingness!
I had a little trouble with the Bonus Episodes because the woman sounded a bit like she was speaking from a throne. (Common sense could have said the things she said.) She could be more friendly and less pedantic.
I love the story and Tonia is a pillar of womanhood.

Could not stop listening!!

After listening to the Dirty John podcast ( loved it) it was so good to hear Tonia’s side of the story!! She is such a strong woman and her girls were amazing to hear from as well!!! Great job!!!

I’ve binged some podcasts before, but I always knew going in that was going to do that. I did not expect to with this one, although the original “Dirty John” podcast was fascinating to me. However, I think this was even more so. Take a listen, you won’t regret it.

I did not expect this experience, and although I cannot say I have been a victim of threats and abuse, I can relate to knowing someone horribly narcissistic and deceitful. If you are wondering if someone in your life is a sociopath or a psychopath, this is an eye opening dive into the real Dirty John and all that he was capable of. I loved it and I want to listen to the full Dirty John podcast again. Tonia, Emily, Abby, Auggie, and Jordan were all very brave to share this journey with us.

Everything from this executive producer rocks!

The story and production value is incredible! Aliza Rosen the executive producer knows how to grab you and keep a hold through this ride!

Haven’t finished this podcast, but loving it. Tanya’s openness combined with the therapist’s assessment/analysis of John Meehan’s behavior makes for a very interesting podcast - thank you for your courage in telling your story Tanya.

I really appreciate you sharing your story. I have been a victim of domestic abuse. my ex threatened my life when I was pregnant with his son and had 2 little girls. he broke my restraining order 17 times but only got charged with 2. they also dropped the crime threat. he spent 1 week in jail and was back out terrorizing me. It disappoints me that the courts let this go on. I agree with the therapist 💯 there needs to be more training for police and women in abusive relationships. thank you again for sharing your story. best wishes to you and your girls.

I think this was a great production except for the commentary between episodes. The woman with the British accent is annoying. I feel like it was a rubbish when she took what Dirty John said to his one daughter as threatening abuse towards the other daughter. It was quite obvious he was just joking or pandering to the little sister. I also felt it wasn't right to name the chapter "dirty sisters". If we're truly concerned with these girls lets let them have some peace and stop tying them to their scumbag deceased father. Just a quibble, but the story is good enough without this Lady trying to squeeze meaning from throw away comments. I didn't hear of the guy ever physically abusing his kids, so don't go down that rabbit hole. Otherwise it's a great story.

I wasn't familiar of Dirty John, so it had me hooked in episode 1.
Excellent podcast 👏

The story mimics a lot of my life, and after 17 years of violent marriage, two daughters, 18 years divorced, 10 years through the courts to keep my youngest daughter safe as he wanted full custody, numerous protection orders all of which he broke. He is still trying to cause us pain and terror. There is something about the narcissistic psychopath that makes them try to inflict more terror . I really found this podcast very informative. Anyone listening should take note of the details of this type and if any of it rings a bell, then I implore you to seek refuge and advice. They do not change. I'm going to re listen as we are yet again being drawn into his focus.

Not only is this podcast a fascinating narrative, it also contains perfect examples of how a victim can get sucked in and manipulated by a psychopathic/ sociopathic/ narcissistic partner. I found the conversations between the wife and the therapist particularly enlightening. I am so glad I came across this podcast

Tonia is such an amazing example!

I think this is a story that all women should read or listen to. Thank you Tonia for sharing your story!

An horrendous and mind blowing account of one mans behaviour on his own family and anyone who was susceptible to his behaviours. Tonia and her daughters are amazing to have been able to survive and recount his terror towards them and women in general. 10 out of 10 to Laura Richards. Again. Check out her other podcasts.

Everyone should have a listen. Instructive..

And fascinating. Laura Richards is so hhpof at showing how we are failing women and children by continued exposure to these ruthless misogynists.

found it very interesting along with the dirty John series. the bonus episodes were and great insight.

Fabulous real time telling of the notorious Mr Meehan by the people closest to him. What a twisted man. Absolutely fascinating and mesmerising retelling of the story by the amazing people who were part of his life and time. Loved it.

I learnt so much from this. so impressed by tonia's strength and humanity. great stuff

This podcast was fabulous. I binged the entire series in one day. It was very engaging in general, but the part I liked most was the inclusion of bonus episodes hosted by Laura Richards, an expert on domestic violence and stalking. She provides important nuance and context after each installment, which helps the listener really understand the true narrative. She provides valuable insight about domestic violence/coercive control and stalking. I highly recommend this podcast to anyone who would like to learn more about the psychology of abusers. This series could really save lives. Well done all who were involved in making it.