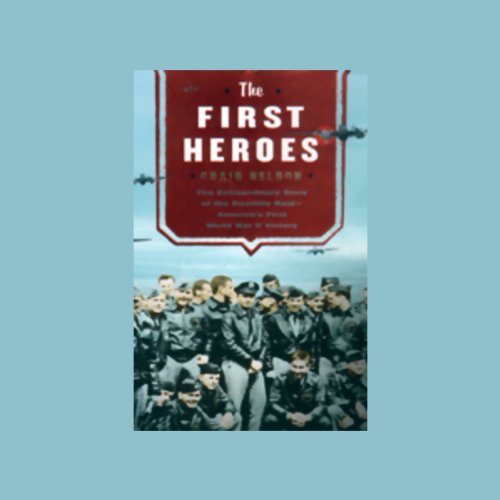 By: Craig Nelson
Narrated by: Raymond Todd
Try for $0.00

Immediately after Japan's December 7, 1941, attack on Pearl Harbor, President Roosevelt sought to restore the honor of the United States with a dramatic act of vengeance: a retaliatory bombing raid on Tokyo itself. In those early days of World War II, America was ill-prepared for any sort of warfare. But FDR was not to be dissuaded, and at his bidding a squadron of scarcely trained army fliers, led by the famous daredevil Jimmy Doolittle, set forth on what everyone regarded as a suicide mission.

The First Heroes is the story of this extraordinary mission, a moment in history that is surprisingly unfamiliar today. To give these heroes their due, Craig Nelson interviewed 20 of the surviving participants and researched more than 40,000 pages of archival documents.

Here is a true account of great personal courage and a powerful reminder that ordinary people, when faced with extraordinary circumstances, can rise to the challenge of history.

What listeners say about The First Heroes

This was an heroic attempt by the author to present a detailed recounting of what at the time was an heroic effort by the fledgling AAF to retaliate for Pearl Harbor and give the United States a psychological lift at the beginning of World War II after the U.S. had suffered defeat after defeat. It is long, it is detailed, it is tedious, yet most of it is good listening, but you have to want to hear it.
But, where do they get readers who pronounce "ensign" as "en sign" rather than "N-sn", or "cpl", the abbreviation for corporal as "c.p.l."? Would you believe "boatswain"?
I can't recommend this book to anyone unless they have an abiding interest in hearing the details of this mission, and what happened to each of the eighty crewmen who took part in the raid.

I really, really wanted to like this book. I'd just finished Hornfischer's outstanding "Last Stand of the Tin Can Sailors" and wanted some more inspirational reading. Unfortunately, the author has no - and I repeat no - required knowledge of the US Navy. There are many, many small, factual errors that are really annoying - referring to the HMS Repulse as a "cruiser", describing the Japanese torpedoes as "two feet long", etc, etc. Anyone with even a basic knowledge of the US Navy in WW2 should have been given an opportunity to preview this book before publication. Additionally, his overuse of military jargon - bombs referred to as "cabbages", torpedoes as "eels" by such a rank amateur was just too much.

The narrator has no idea regarding correct pronunciation of naval terms - (en-sine, indeed.)

I find that when there are so many factual errors in an area that I'm familiar with, I have a tough time accepting the new - often interesting on its face - data that an author brings up. It's too bad that such a terrific topic couldn't have been treated more professionally. I read "Thirty Seconds over Tokyo" as a kid and really was looking for some new information. I blame the editors completely for this second rate attempt.

This book satisfied my desire to know more about the Doolittle raid, and it was interesting to learn so much more about the aftermath than you normally encounter in books dealing with military actions. However, I gave the book only three stars because it is, indeed, distracting to hear "ensign" mispronounced literally dozens of times. Other mispronunciations reveal that the narrator has no familiarity with the subject matter, or military knowledge in general. Other examples of mispronunciations (in addition to those mentioned in the previous review) include, but are not limited to: Swigert (the Apollo astronaut), AFB (always read as letters, not "Air Force Base") and virtually every Japanese name, Fuchida Mitsuo being the worst.
The book was tedious in places, but I would recommend it for its coverage of facts you won't find anywhere else (at least not in one place).

I am very much enjoying this selection for several reasons. First and foremost, it's a really good story that keeps you wanting more. At no point did it ever for a moment become slow.

As a historical reference it offers an excellent gateway to understanding, and wanting to learn more about the pacific campaign.

It does an excellent job covering both the tactical aspects of the raid, as well as the strategy shifts that Japan (wrongfully) adopted as a result of the raid.

What I really liked was that the author leads you in a very logical progression to the battle of Midway, where I'm going to continue on from here.

The reader did make some wackey reading errors, but that was offset by a nice smooth, well paced, and comfortable style.

I've heard a lot of books here on Audible, and this is clearly amoung my favorites. For that I am grateful to the author, the reader, and to Audible.

insight to history that turns religious

The First heroes gives great insight and detail into the planning, execution and aftermath of the Doolittle Raid on Japan. You hear from the flyers involved, the planners and the Japanese point of views. It explores the history of the crews and what they endured after the raid.

However, near the end there seems to be a great deal of emphasis on how Christianity altered the flyers and allowed them to embrace and change their enemy. While I can understand that the comfort of God and religion can help some in difficult circumstances, it just seemed to dwell too much on this aspect.

There are also several significant fact errors in the book but none of importance to the overall material. These mostly deal with locations and or procedures

I still recommend First Heroes but be ready for religious preaching in the last quarter of the book.

I found the text to be intelligently written and informative. I did not like the reader though. When quoting, he tried to sound like Bogie and other 40s and 50s charactors! He also made many quotes to sound like hick southerners with little education. I'm sure this isn't the case. There were also too many mispronounced words and places. I will be looking out for this reader in the future and avoid him.

Most of the actual content is very interesting, apart from a few glaring factual errors obvious to anyone with much knowledge of the Pacific Theater of World War Two. The narrator, however, mispronounces so many words that it's very distracting. If you're considering this audiobook because you already have an interest and a little knowledge of the subject, it may drive you up the wall. Additionally, the last few chapters focus heavily on the role Christianity played in some of the POW's lives in captivity. this may be of interest to some, but I found it largely irrelevant and dull. This is one of my few Audible purchases I intend to return - I have no intention of listening to it again.

I was looking for General Doolittle's book Thirty Seconds Over Tokyo. Apparently it’s out of print. This seemed like the best alternative. The more I listened the more I realized that this narration was one of the worst I had ever heard. Sentences were chopped into pieces, words were repeatedly mispronounced . The narrator actually ruined the authors work. In fact as soon as I write this I’m returning the book.

The harrowing story of the captives from the flight, whether in Manchuria, China or ultimately Japan, is heart-wrenching. The torture and killings by the Japanese are offset only somewhat by the intense transformation of Jacob DeShazer.

Comprehensive account of the Doolittle raid--well written. Complexity increased because of the number of persons involved. A very good read overall.